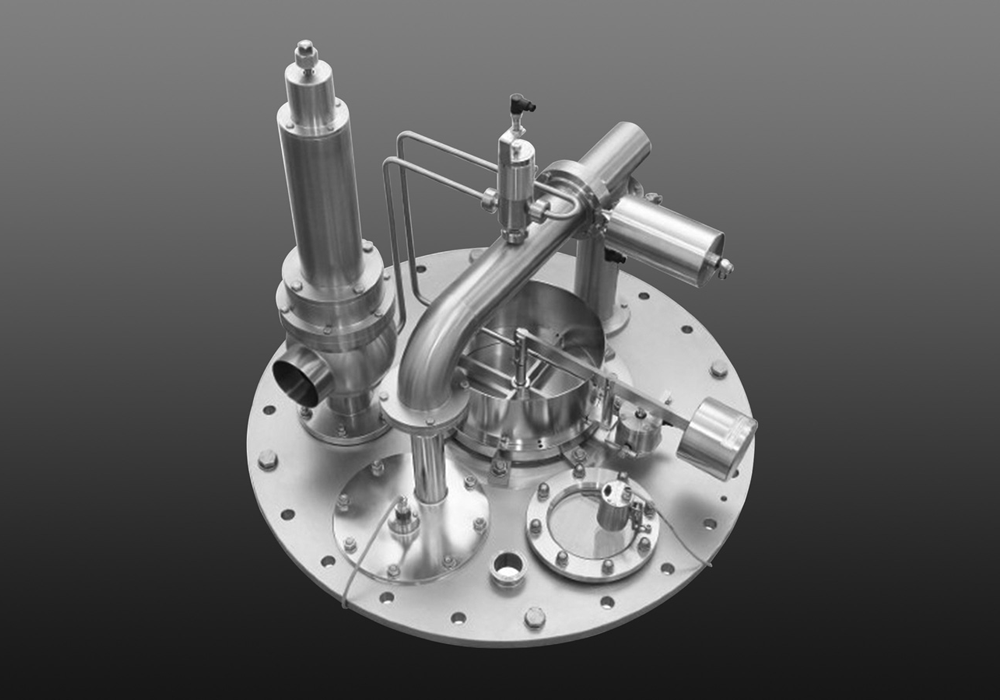 Safety relief valves which are also called pressure relief valve are used in many areas of the food-and beverage industries. Concerning breweries they are ap-plied to secure pressurized tanks in the cold block area, especially in the yeast-, storage-, and fermenting area to protect the vessels against overpressure and overfilling. Besides the strong focus on safe processes, the Hygienic Design should be of great importance to the brewer in order to prevent any bacterial contamination of the equipment and the medium itself.

During the production process the pressure increases in various operating steps. This is always the case when a fluid (liquid or gas) is applied to a closed system or when gas is being released during the beer’s storage due to the fer-mentation process. If a pressure increase occurs, the emerging fluid has to be removed; otherwise the tank could burst in the worst case after the tank de-sign pressure has been exceeded.

Possible causes of a pressure increase within the tank are:

The main objective for tank top solutions should be to ensure a high standard of both an efficient protection against over- and under-pressure and an un-complicated CIP. Therefore the safety valve is usually combined with a vacuum valve and a CIP-system on a tank top plate (also called “dome cap”) or a RLV (cleaning-air-valve combination) which has the advantage of combining all three functions but only requiring one tank connection. Basic requirements should be the easy cleaning of the valves seats and the possibility to lift the valves on a regular basis in order to check on the smooth operation.

In order to prevent overpressure within the tank, various solutions may be ap-plied. Especially safety valves have proven themselves to be an excellent solu-tion because they either can relief pressure or can be used as a bunging device to control the pressure. The original purpose of a bunging device is to regulate the fermentation process. Basically bunging devices are weight- or spring-loaded safety valves for gas only, with an optional bunging glass full of liquid.

The objective is to adjust the required CO2-content in the beer and to hold the fermentation pressure in the bright beer tank on a constant level.

When designing safety valves according to various requirements and guidelines the following points have to be taken into account.

Handtmann Armaturenfabrik has made itself a well-known name as a manufac-turer of safety valves according to the Pressure Equipment Directive (PED) which is specifying the basic principles for the design and sale of safety valves on the European market. For the US market, other regulations and technical requirements apply. The certification of the safety valves according to the ASME code is a basic requirement for entering this market and is proving a good basis for other markets. The ASME Boiler & Pressure Vessel Code is a comprehensive set of standards for the construction, manufacturing, testing and accreditation of boilers and pressure vessels. In order to receive the ASME certification, the formal approval of the National Board has to be obtained.

The National Board of Boiler and Pressure Vessel Inspectors (NB) is an ASME-certified independent testing laboratory for safety valves. First, the NB tests the design drawings of the valves. Later, preliminary tests of the valve prototypes are conducted to determine the key performance indicator, followed by a qual-ity audit at the valve manufacturers. The final step at NB is a test of valves from the current production. If the measured performance data matches that of the preliminary tests, the NB will issue a certificate verifying compliance with the ASME requirements.

For obtaining the ASME-UV certification, an entirely new series with nominal DN-sizes from DN 25 to DN 80 was constructed. In addition to the practical per-formance tests, the first nominal sizes of the constructed prototypes were also subjected to a flow analysis. This laid the foundation for evaluating and com-paring the parameters that influenced the flow characteristics. The results were applied to the construction of the other sizes, appropriately scaled in each case. All the prototypes were tested using a test bench with set, defined pres-sures for water and air media. Following some fine-tuning of the design, the valves underwent performance testing at NB. Later, valves from the current production underwent performance testing with different set pressure values.

A further key requirement of the ASME code is that of quality, and the quality assurance process necessary to achieve it. Apart from the construction re-quirements, this also includes the ASME-compliant materials to be used, the requirements for ASME-compliant welding technology, the monitoring of the manufacturing process, and valve testing and adjustment. Due to these re-quirements an ASME Quality Assurance Manual had to be created, containing the necessary inspection reports, and work and process instructions. The im-plementation of the quality assurance system will be reviewed later over a pe-riod of several days by an audit. For safety valve manufacturers, ASME has a special requirement that must be met. A Certified Individual (CI) must be ap-pointed as an official “authorized agent”. A Certified Individual is a specially trained employee who has successfully completed an Online Training course at the National Board. The CIs oversee the manufacturing of the ASME safety valves, to verify that the requirements of Section VIII Division 1 of the ASME code are adhered to. Their responsibilities cover the entire process – material selection, manufacturing, adjustment, and final inspection. In the last step of the process chain, the manufacturer’s Certificate of Conformity must also be signed by a CI. This is a key step in the process, as this is the manufacturer’s guarantee that the valves are fully compliant with the requirements of the ASME code. Only then valves are to be stamped with the ASME Certification Mark (UV Stamp) and the NB mark that identify them as ASME safety valves.

Albert Handtmann Armaturenfabrik is an ASME-certified “UV Stamp Holder” and therefore a certified manufacturer of stainless steel hygienic safety valves. The new type series 33551 and 33561 correspond to the relevant ASME code with regard to design, performance, and quality. These valves therefore bear the ASME Certification Mark with the UV designator (UV Stamp).

Features of an ASME safety valve