Fair Beer Trade: Taxes Could Drive Beer In India To A Point of Extinction 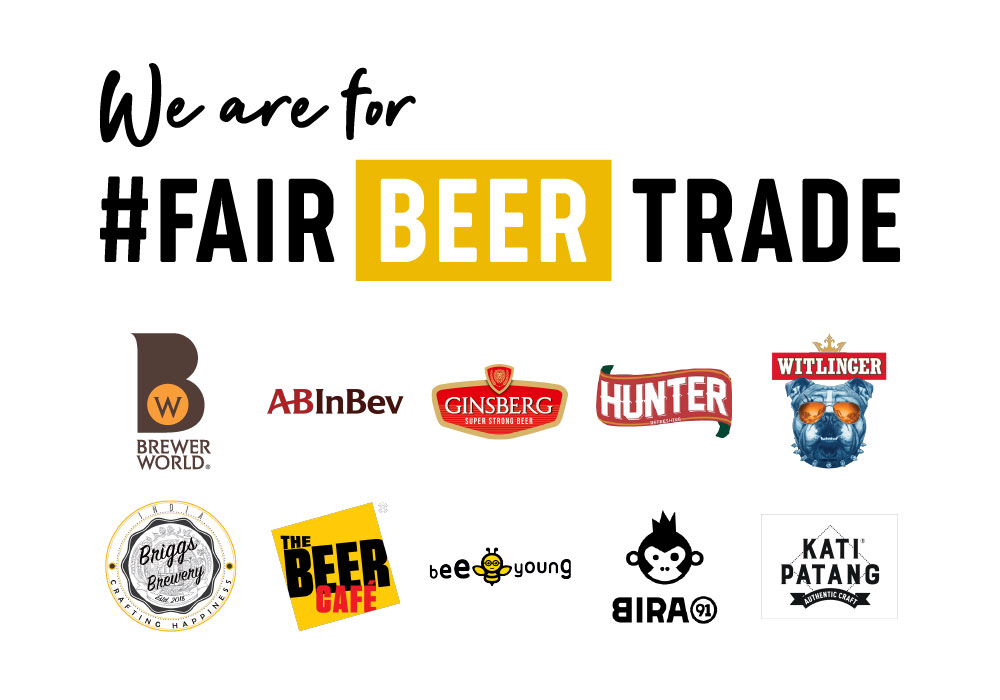 The oldest recorded recipe in the world is that of beer and also happens to be a song of praise to Goddess Ninkasi, the Sumerian goddess of beer and fertility. It was written in 1800 B.C. And the Pyramids of Giza, dating back to 2550 B.C. were built on beer; four or five litres of beer were given to workers each day in reward for their labour.

Medieval Norse – Icelandic sagas wax eloquent about the beer and mead-drinking habits of the ancient Viking warriors (who, by the way, even had a beer goddess they worshipped) while in China, newly-wedded couples raised a toast of rice beer to their happy life ahead. And as for Europe, Trappist monks played part-time brewers, making beer for money that could be used for the upkeep of the monastery.

It’s clear that beer has been one of the prime movers of human culture, fuelling the development of arts, language and even religion and defining the way we socialise and interact with each other. That is why even today, beer is the third most popular drink in the world and countries globally have kept the alcobev at an affordable price so more people drink this moderate,good-for-health beverage drink made from all-natural ingredients.

But in India, things are very different. The average consumer pays a tax that’s almost 60 percent higher for a pint that’s probably just 4-5 percent ABV, as compared to the rest of the world. And industry experts fear that this may cause the beer industry in India to go a bit flat.

On 23rd June, Brewer World launched the “I’m for Fair Beer Trade” campaign. The twelve-day initiative in collaboration with 9 different brands from both the commercial and the bottled craft beer segments was designed to make viewers aware of the taxation issues imposed on beer in our country, which could potentially drive the alcobev segment to extinction in our markets and affect the health of Indian consumers at large. We invited a panel of 9 industry experts to find out the reasons behind this regressive attitude towards alcohol consumption and beer and what they propose to solve this problem.

Globally, the consumer pays approximately 5 times more for hard liquor than for beer since it is taxed according to the alcohol by volume content. But in India, beer, a moderate alcohol beverage, is taxed 60 percent higher as compared to the rest of the world along with hard spirits, despite being an “agricultural” product that’s ready to drink without any dilution.

The Indian alcohol business will be neither owned, nor disowned!

The State government’s primary function is enforcing public safety laws, one of which involves completely prohibiting liquor altogether. For this reason, liquor bans offer ministers considerable political power in a country where the subject of alcohol is still very much a taboo and is often a sure-shot way of winning any election.

On the other hand, each Indian state’s excise also has to make sure that the revenues earned from their state is the highest. With GST being shared through the central system, the only actual source of revenue left for the state is the VAT/excise tax which comes from the alcohol industry which adds up to a lot considering that India is one of the largest consumers of alcohol in the world. For this reason, many analysts and economists are of the opinion that complete alcohol prohibition in India will never happen, despite the State Government (and the people voting for them) harbouring such an uncomfortable relationship with alcohol.

With money on their mind, States ignore the fact that beer is different from liquor

State excise officials in India have only one goal in mind: revenue, and to them, that’s synonymous with liquor. Unaware of the basics of beer business like product ABV, current trends and consumer needs, they tend to treat “agricultural” products like beer and wine the same as cheap country-made liquor and hard spirits. With 90 percent sales revenue in our whiskey-intoxicated country coming from IMFL, the government tends to overlook beer sales and estimates that by placing additional taxes on the beer, they would generate more revenue. 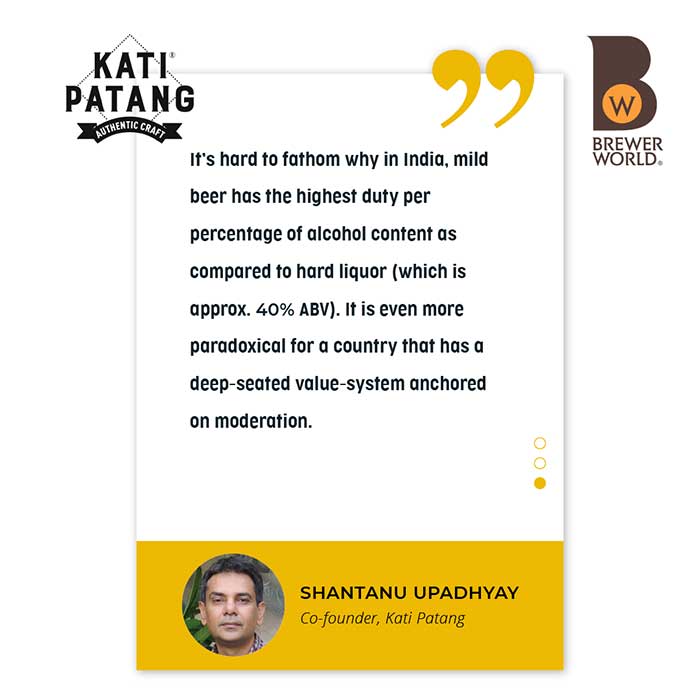 India may be the highest consumer of alcohol in the world, but the preferred choice is usually hard liquor. When it comes to beer, the country only consumes 6-8 percent as compared to the rest of the world. 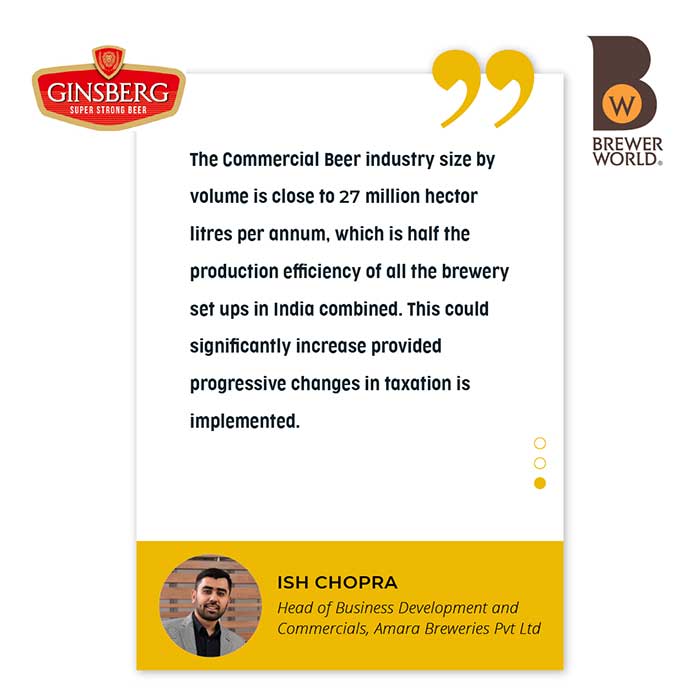 Raising taxes further on beer makes it unaffordable to the masses and pushes consumers towards cheap country liquor and spirits that offer a greater high for half the cost. It also paves the way for illicit alcohol trafficking. As a result, the government ends up running huge losses.

This was witnessed very recently when states like Delhi and Andhra Pradesh collectively hiked prices by imposing a 70 percent “Special Corona” fee on liquor sales right after the lockdown. Still reeling from the liquor ban during the country-wide lockdown, the high taxes further sent grey market prices soaring while the government was left staring at empty coffers.

How this affects consumer health and drinking behaviour

With beer being more expensive than Indian-made Foreign Liquor, beer industry experts have noticed a significant shift towards the latter which contains up to 9-10 times more alcohol. As a result, young Indians are getting used to consuming higher quantities of alcohol which could ultimately be detrimental to their health.

Illicit liquor also has serious public health implications and has claimed thousands of lives among the poor in the past and state authorities have noted a parallel nexus forming between people who deal in crime and those who deal in illegally-acquired alcohol.

1. Taxing beer based on alcohol by volume 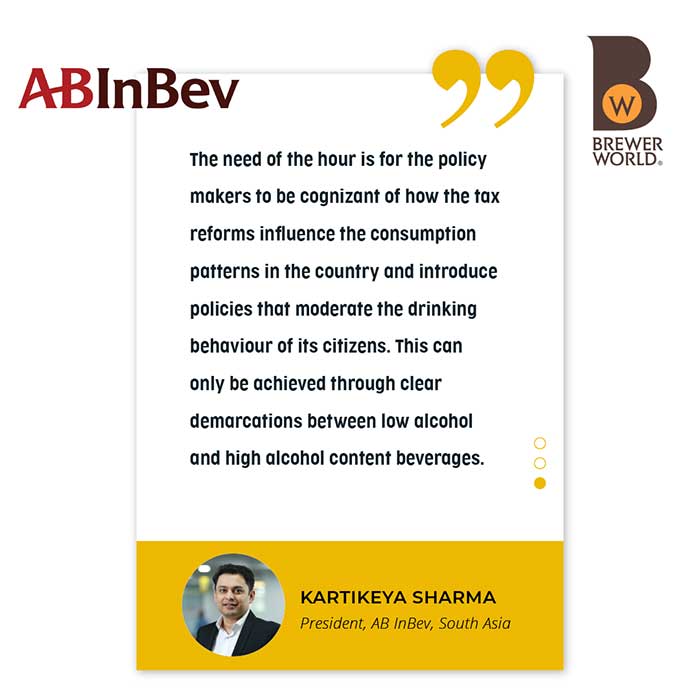 Tax reforms influence the consumption patterns in the country. The need of the hour is introduction of new policies that moderate the drinking behaviour of its citizens. This can only be achieved through clear demarcations between low alcohol and high alcohol content beverages.

2. Giving beer a separate identity of its own

Beer, a ready-to-made drink that requires no further dilution (unlike spirits) is made from fermented malted grains, yeast and hops and is 90 percent water. Therefore, logically speaking, beer cannot be categorised the same as liquor and deserves to be labeled differently so as to accurately educate consumers about making responsible alcohol choices. 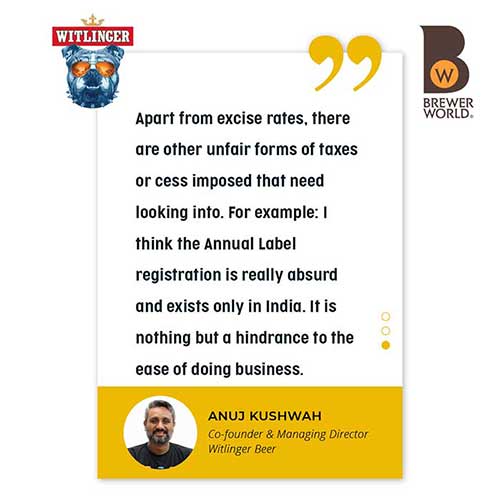 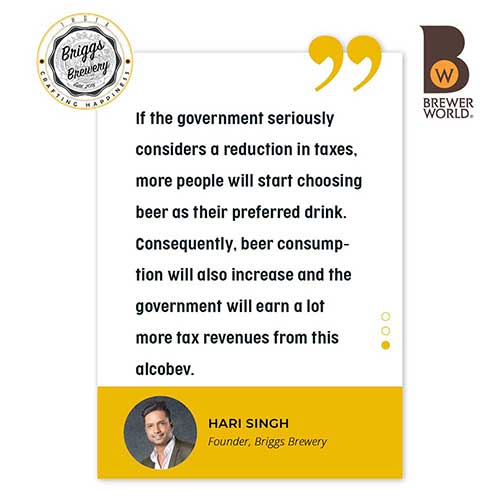 With each state in India operating like a different country, the excise duties placed on beer varies widely depending on what part of India you are. This, along with several other absurd taxes like Annual Label Registration acts as a bottleneck to doing beer business smoothly in India.

Realistic taxes on beer would help keep the end-consumer price reasonable. This is especially important now, with the lockdown affecting the finances of so many households across the country who are already cutting costs. According to some industry experts, beer should be taxed at par with other beverages. This would expand consumer base and help expand the beer industry in India.

4. Increase the overall availability of beer 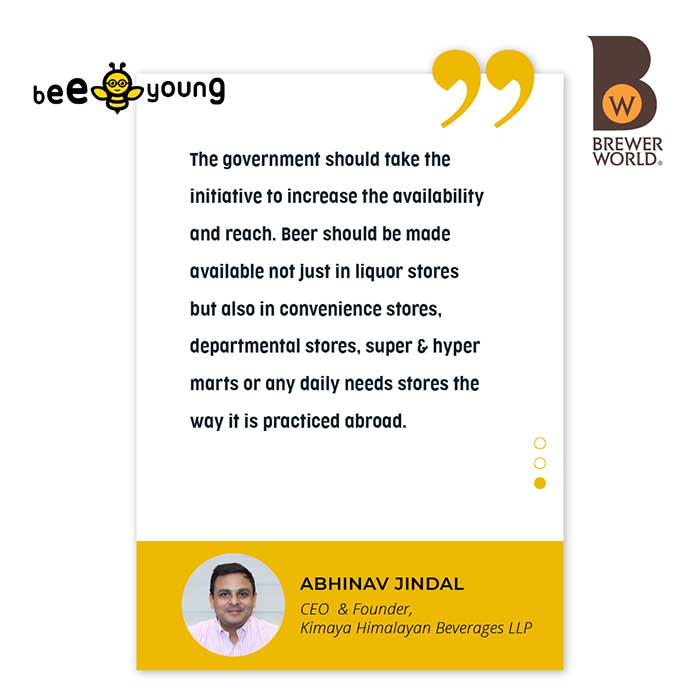 With beer only being available in liquor outlets and bars, the state government paints an untrue picture of the alcobev to consumers. In reality, beer deserves its own retail licensing policy that distinguishes it from hard liquor and spirits and should be made available in convenience stores, departmental stores, super & hyper marts or any daily needs stores, just like it is abroad.

A country that’s one of the largest whiskey-consuming nations of the world, the Indian alcohol market is a lucrative field for many players. Our pleasant, tropical weather and growing young working population with greater spending capabilities – coupled with a marked cultural and lifestyle shift already serves as a favourable backdrop for beer. But that’s not enough.

India’s regressive taxation policies are a clear reflection of our traditional, orthodox views on alcohol consumption. Because of this, the growth of beer has been strangely staggered in one of the world’s fastest-growing alcohol markets when in fact, it should be the other way around. 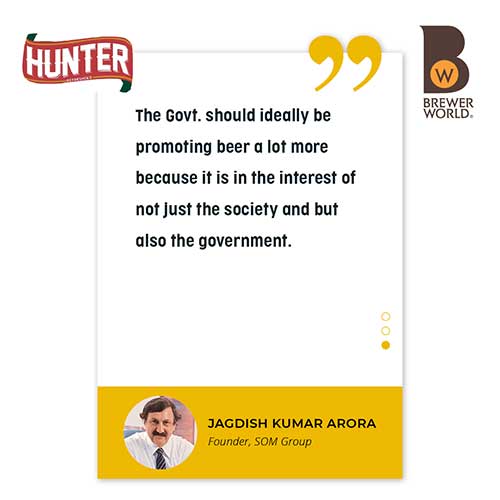 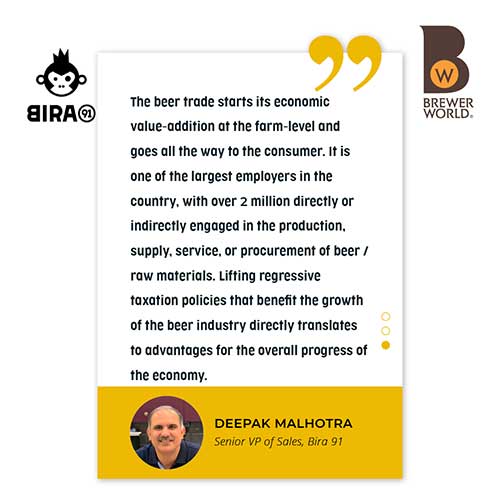 Luckily, things seem to be changing for the better. Recently, the Haryana government introduced a new policy for the fiscal year which reduces the excise duty on beer and wine. To ensure low-alcohol content beverages like beer and wine gain equal momentum as liquor in the state, Haryana also introduced a ‘super mild beer’ category with a fixed excise duty taking into consideration the alcohol by volume content. The West Bengal Government on the other hand, has granted Amazon and BigBasket the licence to sell beer online while the State Excise Departments of Karnataka and Maharashtra introduced progressive policy reforms such as allowing growler take-aways for the local microbreweries. The Maharashtra Chapter of the Craft Brewers Association also secured permission to set up India’s first very own Craft Beer Shoppe that allows Maharashtra licensed microbreweries to go directly to retail.

So there is hope that 2020 will be the turning point where beer taxation policies in the commercial beer and craft bottled segments are finally amended as per global best practices so it’s a win-win for everyone. Brewer World is joining hands with key players from the Indian Beer Industry to bring about fair beer taxation in India. If you’re in agreement, please sign our Fair Beer Trade petition and let’s make it happen.