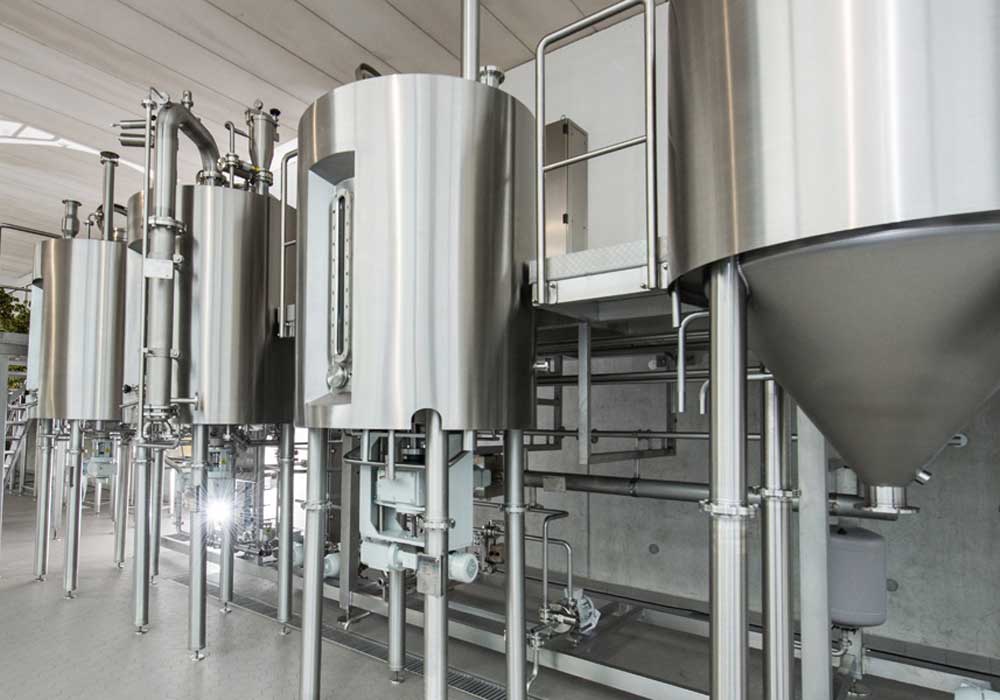 The key task involved initially was to integrate a guide pipe into the tank in order to create a mixing zone at the top and a sedimentation zone at the bottom. With the aid of trials on a small scale at TUM University in Munich, the parameters concerned were evaluated. On this basis, in June 2016 a pilot system rated at 50 hectolitres a day was started up. Since commissioning was completed, the system has been operating with dependable stability:

The test brewery was so satisfied with the product quality that in 2017 the production output was upsized to 2,000 hectolitres a day. With this size of tank, however, the ingressing of the guide pipe constitutes a definite challenge in terms of logistics and statics. For this reason, an alternative was sought that functions in a similar manner, but is easier to ingress into tanks.

This alternative is called Poseidon, and is a unit designed to provide dynamic fermentation (batch and continuous fermentation processes). It is installed in the fermenter’s cone, and can be retrofitted without any problems to almost all types of tank. In order to simultaneously sediment and remove the particles more effectively during recirculation, KRONES has developed a pipe-in-pipe system featuring a specially designed displacer. This avoids channelling at yeast harvesting and solids removal and reduces the layer thickness of the sediment at the cooling surface, thus preventing yeast autolysis and ensuring faster removal processes.

A distribution station enables recirculation to be performed in numerous variations, so that ideal homogenisation is achieved even with dry-hopping. Hygiene-compliant installation, moreover, is designed to improve the efficacy of tank cleaning.

On an industrial scale, trials have already been conducted with batch fermentation. Here, Poseidon’s technology was in the autumn of 2016 integrated into the removable cones of 1,600- and 2,400- hectolitre tanks.

The next step was to design-enhance the process for continuous fermentation. For this purpose, several of the Poseidon units are linked up to each other, so that continuous process control can be initiated at need. The tanks can then be operated in the conventional way, with zone recirculation, or run in continuous mode. This creates maximised scope for flexibility and seasonal adjustments.

Advantages of a continuous fermentation process

“The key to optimising the fermentation process is yeast management, which includes early harvesting of the sedimented yeast, its pressure-relief, followed by cooling and cold-storage. Many approaches, such as accelerated or continuous fermentation processes, have failed because the yeast was treated differently from the conventional processes. In the projects presented for continuous or ‘dynamic’ fermentation, this issue is taken into due account. Appropriate flow routing of the fermentation substrate can be selectively manipulated to ensure optimal conditions for the yeast: the creation of ‘mixing zones’ enables high mass transfer rates to be achieved, just as the yeast can be naturally deposited using adjustable ‘calming zones’, and removed from the fermentation process. In qualitative terms, the beers have so far turned out admirably, which is why I regard this technology as highly promising.”Prof. Dr. Ludwig Narziss