A Guide To Nitro Beer 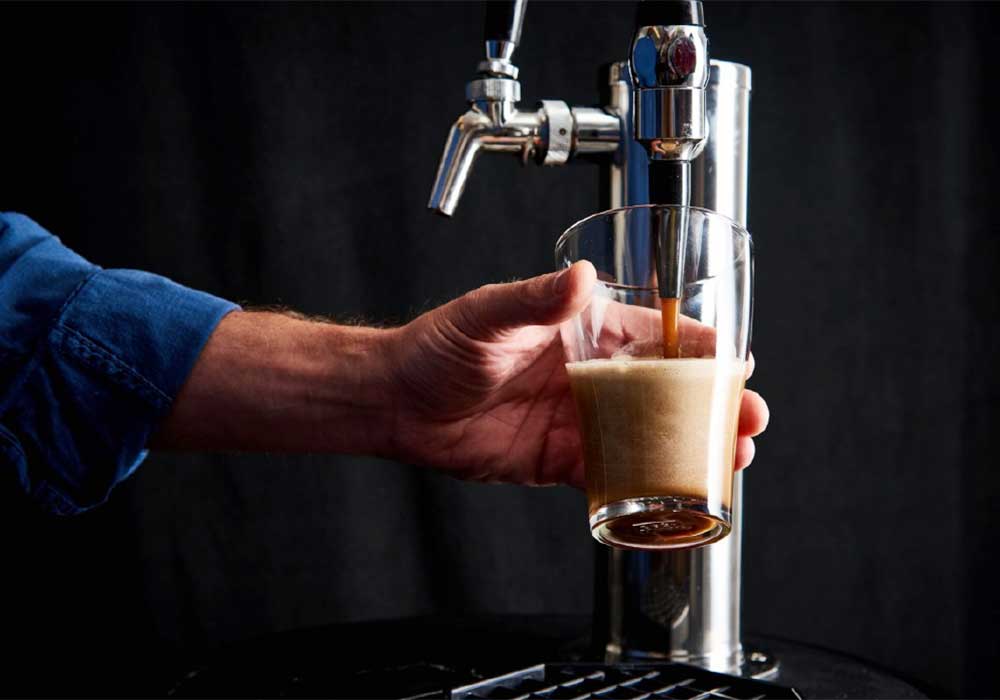 Natural Carbonation that happens during fermentation is what gives a beer its character and crispness. So imagine when the idea of adding more gas into beer, especially a gas that is not Carbon Dioxide was put forth the brewing community was fast to turn it down.

Carbon Dioxide is what is released in your regular beer every time you take a sip. It is trapped in your beer as a by-product of the yeast fermentation. Beers are either force-carbonated during packaging or bottle conditioned. Carbonation gives your beer a sharp texture and we all know no one likes to drink a flat beer.

When the brewing community was introduced to the idea of adding Nitrogen to their beer, it sounded blasphemous. Nitrogen is a gas that is pretty much insoluble in liquid and to even try to dissolve it, it needs to be pressurized and kept really cold.

The simple act of adding Nitrogen to your beer can make it way smoother and profoundly change the temperature of your beer. The smoothness of these beers can be attributed to the fact that Nitrogen Bubbles are smaller than Carbon Dioxide Bubbles.

The process of pouring Nitrogen infused beer is quite different from that of your regular brews. Every time you pour a Nitro Beer, you pour it into a glass till about 70-80% is filled and keep it aside so you can watch the Cascade effect. This Cascading effect makes it look velvety smooth for consumption with all the milky bubbles coming out of your beer. After the Cascading comes down, you top off your glass and there your beer remains with a thick and frothy head. 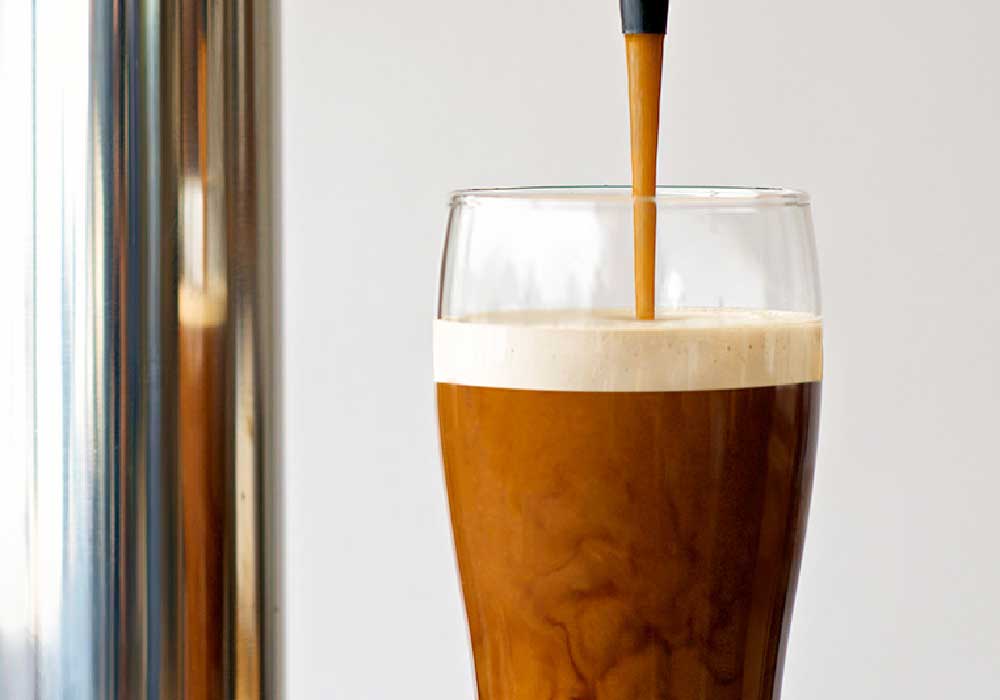 The process of adding nitrogen gas to your beer is called Nitrogenation. The way you nitrogenate your beer can vastly vary depending on the volume of beer you’re nitrogenating. You can add N2 to your beer from gas cylinders or by using a nitrogen generator.

Small producers often use a pressure tank to infuse nitrogen into the beer. For stouts, a pressure of 7 psi above atmospheric will enable 40 parts per million of nitrogen to remain in solution, enough to give us that premium nitro texture.

Nitro beer from a keg or a tank is best served from a dedicated nitro beer faucet. It has a restrictor plate with small holes just before the faucet. This helps the nitrogen bubbles to break out and ensures a substantial head and a creamy texture.

Guinness is the company that spearheaded the Nitro Beer movement by figuring out how to Can them. Before 1980, Nitro Beers were only available on tap and these were specialized taps that could only be used to pour Nitro Beers. Guinness revolutionized the industry by making plastic widgets that help dispense Nitrogen into cans and bottles under pressure.

The Guinness website is quoted explaining the above as:

“The world-famous Guinness widget uses an ingenious nitrogen filled capsule that surges with bubbles when the ring pull is opened – replicating the draught experience in a can.” 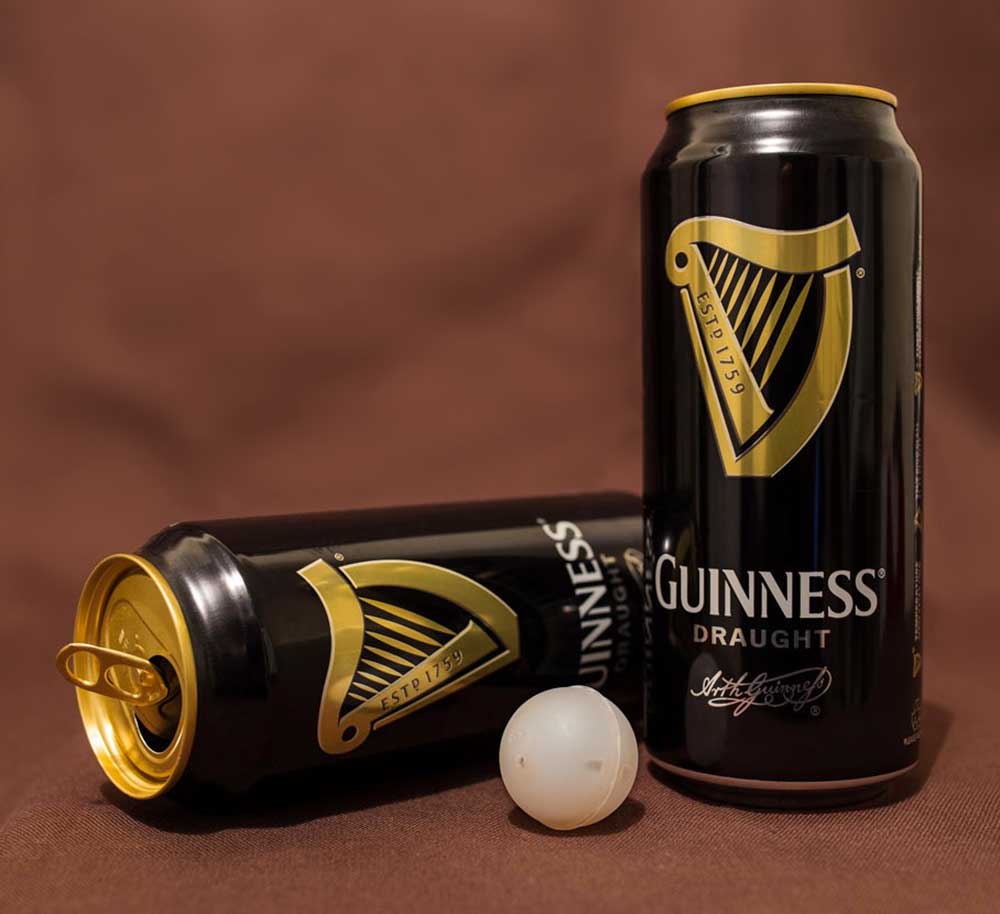 As soon as a can is opened, pressure quickly drops, causing the pressurised N2 gas and beer inside the widget to jet out from the hole. This agitation on the surrounding beer causes a chain reaction of bubble formation throughout the beer. The result is a surging mixture in the glass of very small gas bubbles and liquid.

Tell us more about your favourite Nitro Brews in the comments sections below.