Home / Ingredients  / The Role of Enzymes in Hop Biotransformation

The Role of Enzymes in Hop Biotransformation 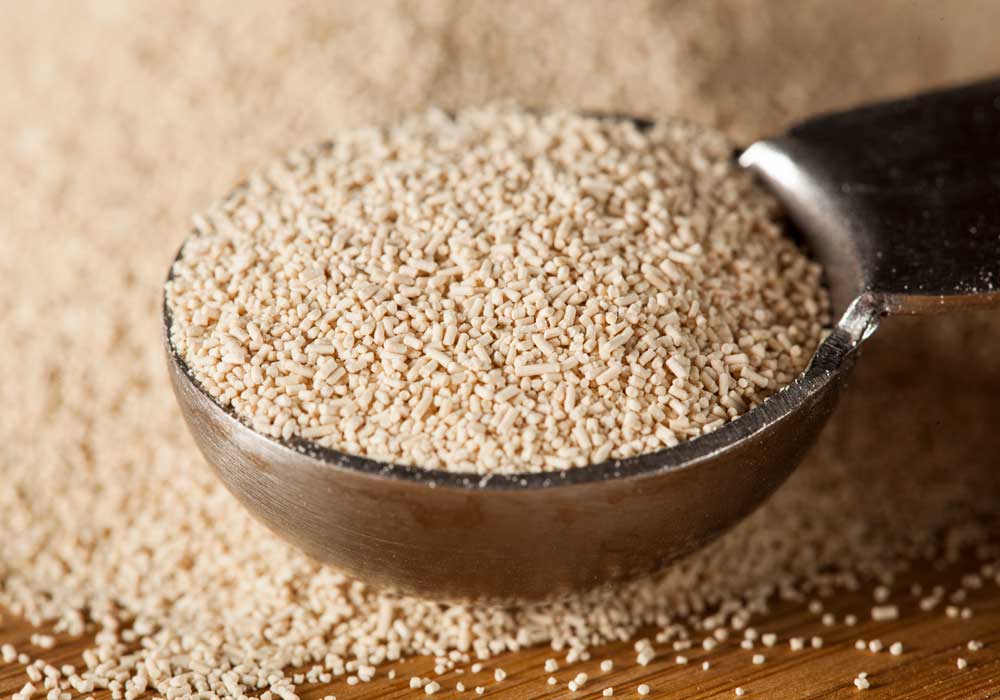 Biotransformation is a buzzword nowadays in brewing, which can sometimes be confusing due to the complex processes involved. Basically, it is a chemical modification made by an organism on a compound.

Brewer’s yeast, during the fermentation, metabolizes sugars and converts them into alcohol and carbon dioxide. Besides this, yeast also releases enzymes such as β-glucosidase and β-lyase. These two enzymes play a major role in biotransformation with the release of aromatic compounds. Going forward, brewers can make use of these enzymes to enhance the sensory profile of the resulting beer.

Biotransformation is an interaction which happens between two prime ingredients used in brewing: hops and yeast. In this article, we take two approaches to find out what role does hops and yeast have to play individually.

The Role of Hops in Biotransformation

It is a well known fact that hops are essential in beer production, mainly due to their contribution to aroma and bitterness. In addition to water and various proteins, the chemical composition of hops consist of tannins also known as polyphenols, hop resins and hop oils. Each one of these would contribute to the sensory profile of the resulting beer.

Hops contain another compound which also has an important contribution to biotransformation, known as glycoside. Glycosides are molecules in which a sugar molecule is bonded to another molecule. 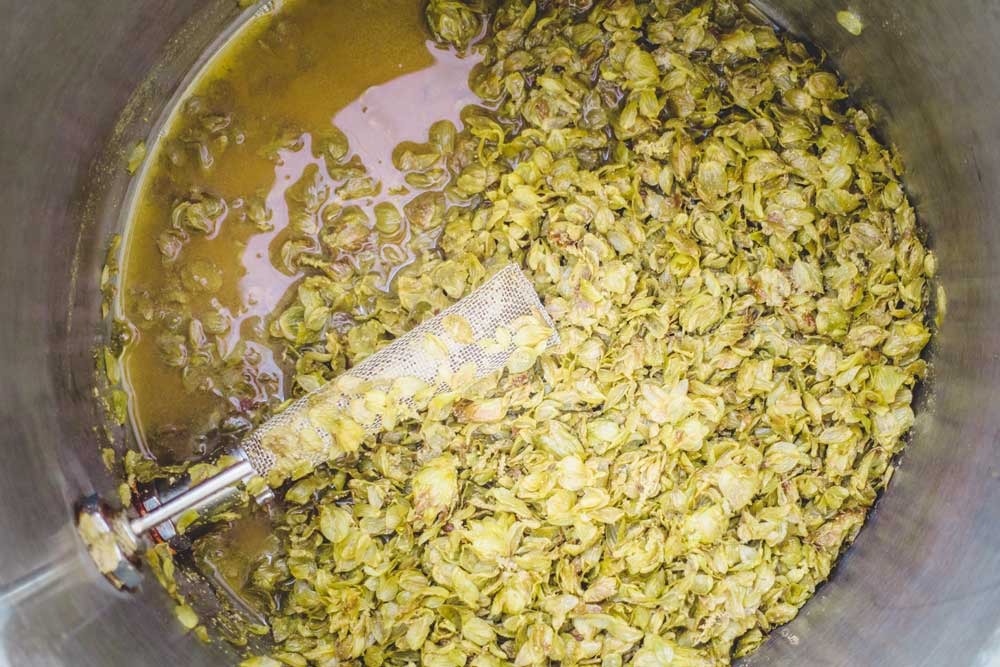 Glycosides are released through hydrolysis. In brewing, hop-derived glycosides are mainly formed by a monoterpene and carbohydrate, in their combined state, a molecule that has no aroma and no sweetness. Flavour compounds which are derived from glycosides are considered to contribute towards the hop flavour in beer.

The high demand for hop aroma varieties, among other production factors, led brewers to look for new and innovative ways to boost hop aroma and flavour. Therefore, hop biotransformation may become a potential solution to optimize the use of hops by changing the ratio of specific aromatic compounds and, therefore, modifying the diversity of flavours and aroma in beer.

The Role of Yeast Enzymes in Biotransformation

Yeast enzymes play a crucial role by splitting glycosides, which is a compound derived from hops, as they do not contribute to beer aroma. Once the glycoside molecule is broken by hydrolysis, it results in monoterpene alcohol and glucose molecules. 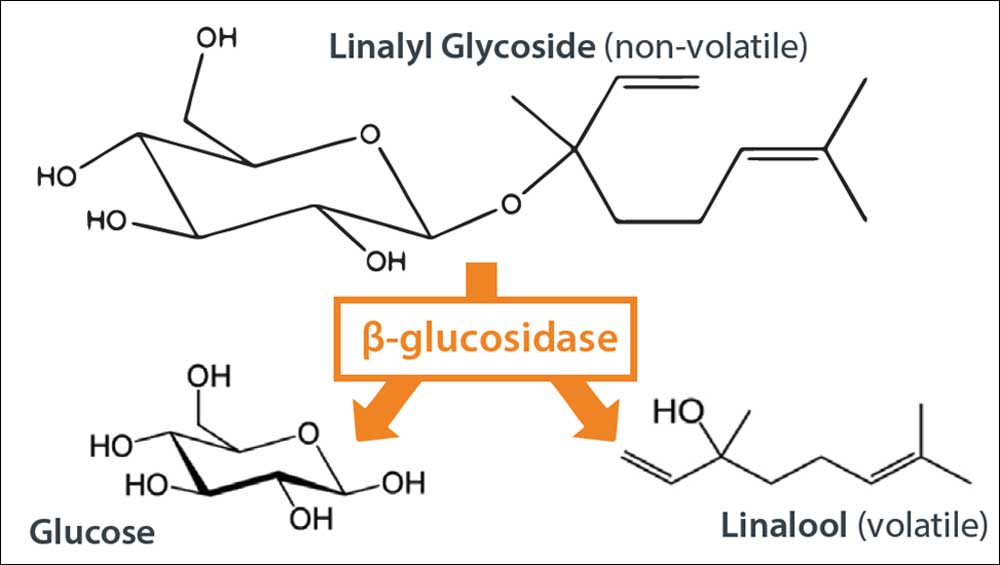 In general, when a non-volatile terpene glycoside is hydrolyzed, it results in the release of a monoterpene alcohol (e.g. linalool) and a glucose molecule. There are many compounds which impart diverse flavors, such as citrus, fruity or floral, and higher levels of terpenes are associated with greater overall hop aroma intensity. The enzymatic activity of a yeast depends on a lot of factors such as yeast strain and its genetics.

β-glucosidase and β-lyase enzymes, together release several compounds which are highly volatile and are perceived as citrus, fruity, floral, sulphur etc. Thiols are aromatic compounds found in hops and represent about 1% of the total hop oil content. Despite their low concentration, their contribution to aroma in beer is significant due to their low detection threshold. Besides this, hops also contain thiol precursors which do not impart any flavor, but through β-lyase activity these highly aromatic compounds can be released and, therefore, perceived by the consumer. 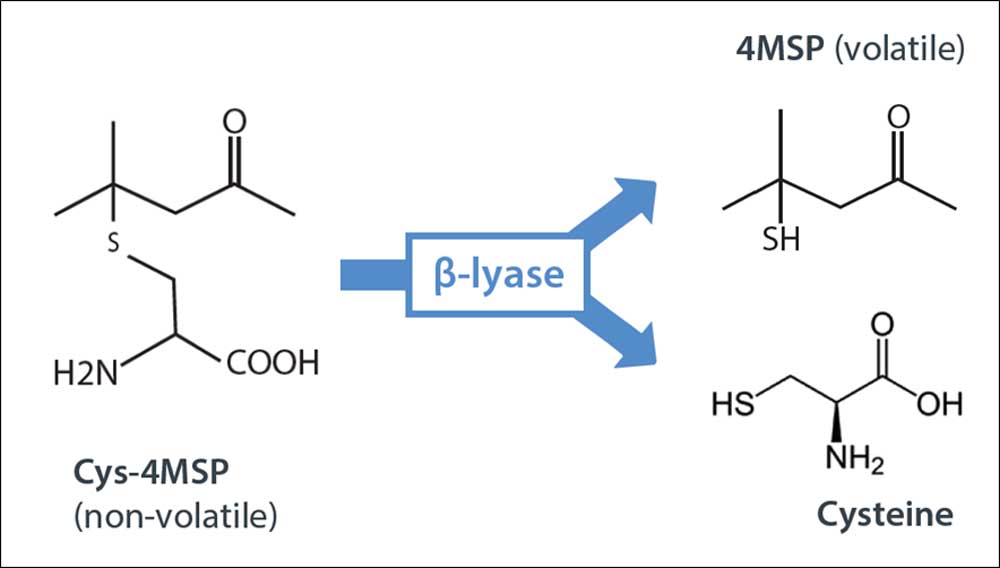 The Use of Enzymes

From the research, it is evident that the enzyme performance will depend on its origin. In addition, the nature of the enzyme will be affected by fermentation conditions such as glucose concentration, pH and temperature. Enzymatic preparations obtained from a specific fungi, such as Aspergillus niger, have shown more resistance to low pH and high temperatures. 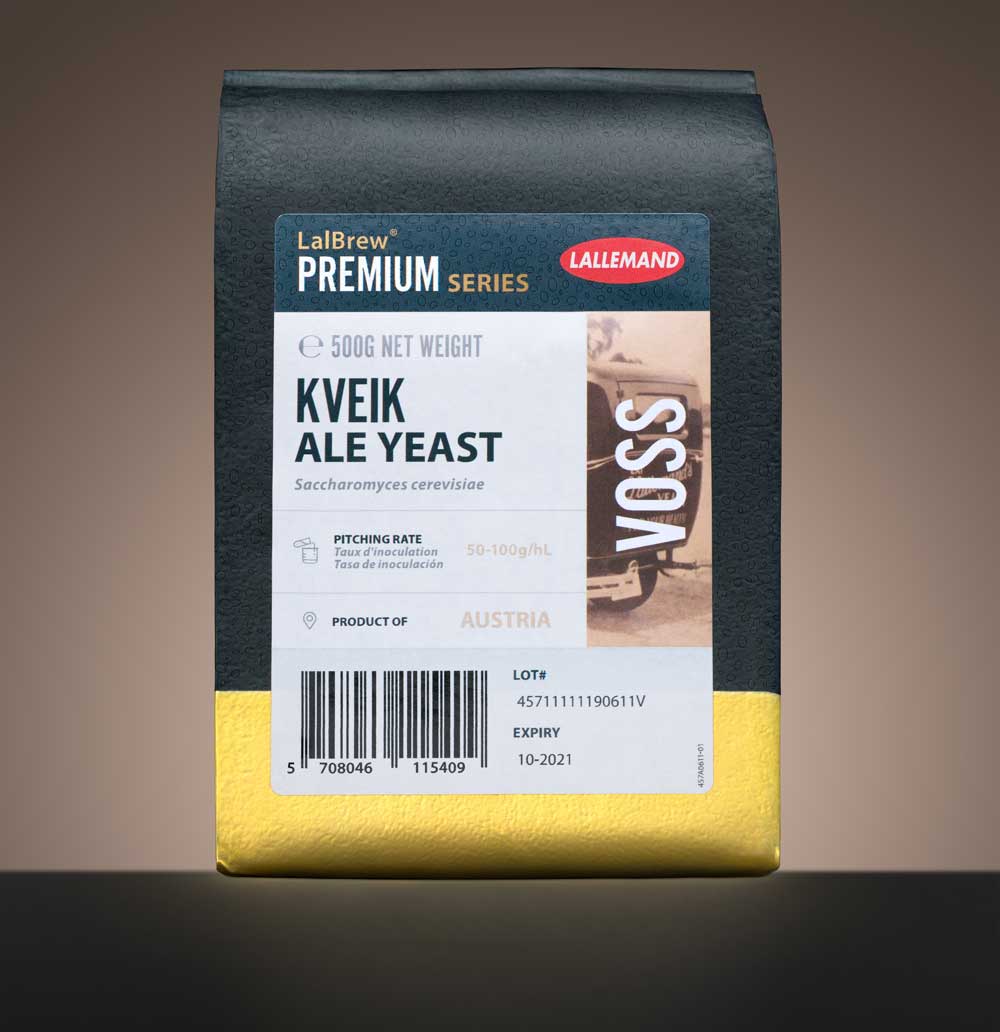 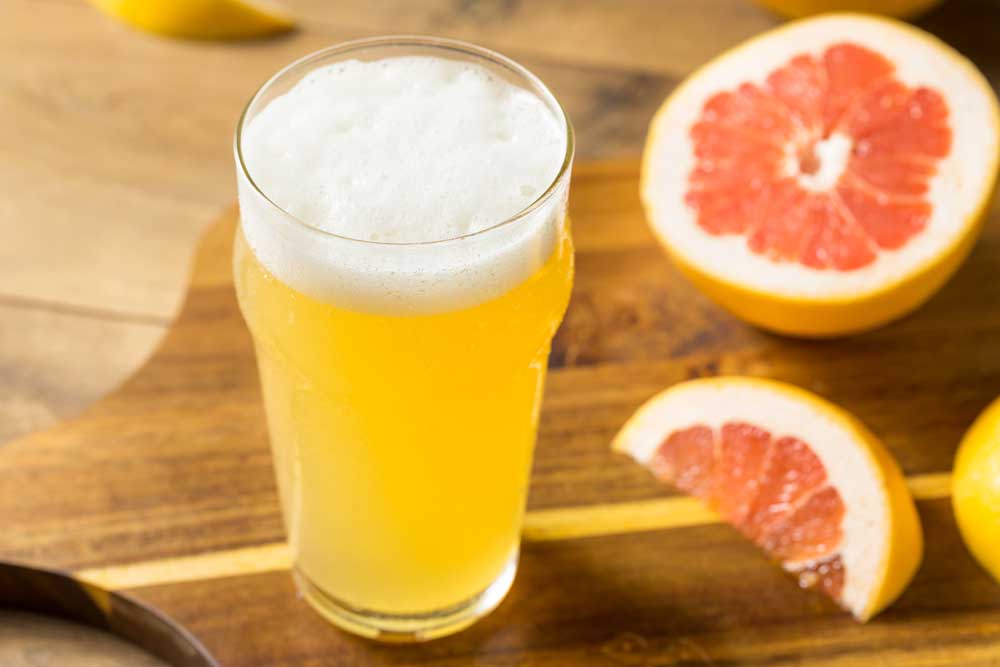 A picture of Sour IPA

In order to assess the potential of enzymes a trial was conducted at Naparbier, a craft brewery located in Noáin (Navarra, Spain).

In this trial, wort is obtained from the same batch and was split into two separate fermentation vessels (FV). Fermentation vessel #1 was a control batch with no enzymes added and vessel #2 was added with enzymes. Resulting beers from each tank were packaged separately for sensory and analytical purposes. 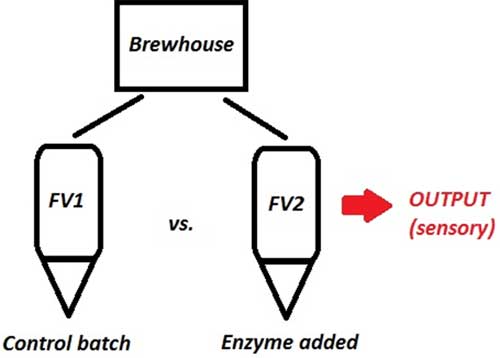 A split batch into a control vs. enzyme treated

The beer style brewed in this trial was a Brut IPA, which is known for its high hop aroma and flavour, clear appearance with no residual sweetness. The selected strain was LalBrew BRY-97™ West Coast Ale Yeast and the hop varieties used in the hot-side were Columbus (bittering hops) and Ahtanum™ (whirlpool hops) whereas in the cold-side Centennial and Chinook were added at equal parts for two dry-hops in different days. The selection of the hop varieties was based on their aroma characteristics, as the goal was to observe the effects on the resulting sensory profile. 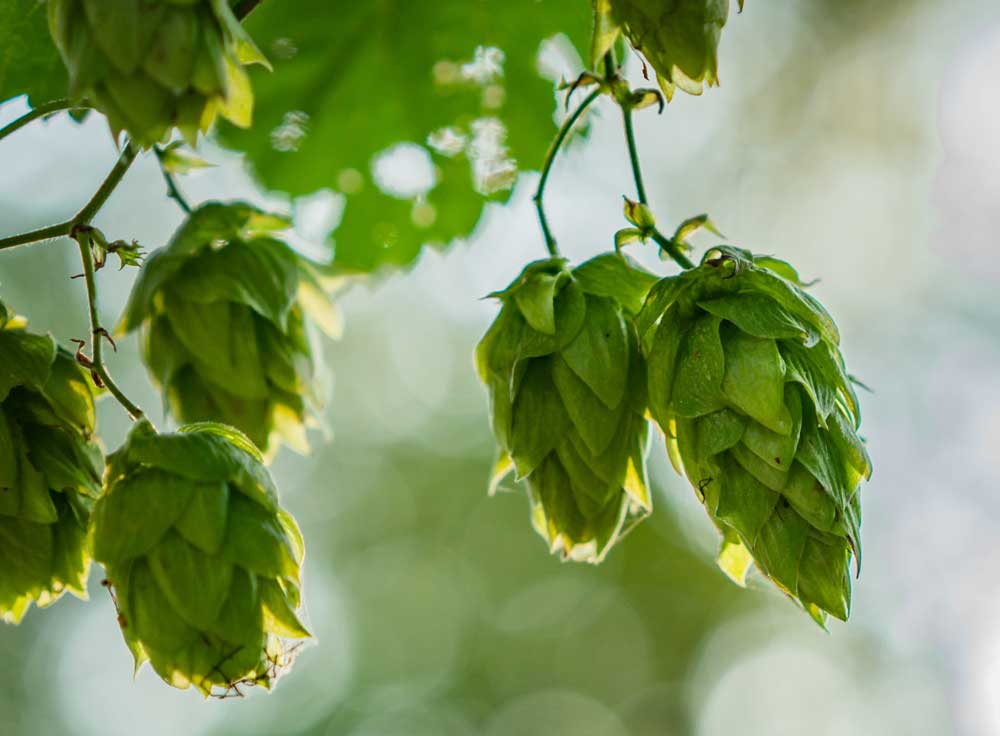 At the beginning of fermentation, Aromazyme was added directly into the fermenting vessel #2, whereas vessel #1 was the control batch without enzymes. Later on, samples were drawn out and conduct analysis and a blind tasting with a panel.

The alcohol content was analysed to assess the glycosidic activity of the enzymes used. The results showed a slight increase in ABV when using Aromazyme. The enzyme-treated beer contained 7.12% ABV, whereas the controlled beer 6.74% ABV, indicating that the glucose released from the hop-derived glycoside was metabolised during fermentation and converted into alcohol.

Apart from the alcohol content, a total of three hop-derived monoterpene alcohols were analysed: linalool, β-citronellol and geraniol, since these are considered the most relevant in hopped beer flavour. As illustrated, enzyme-treated beers showed an increased concentration of nearly 300% in linalool and 77% in β-citronellol, whereas geraniol decreased 18%, when compared to the control beer. 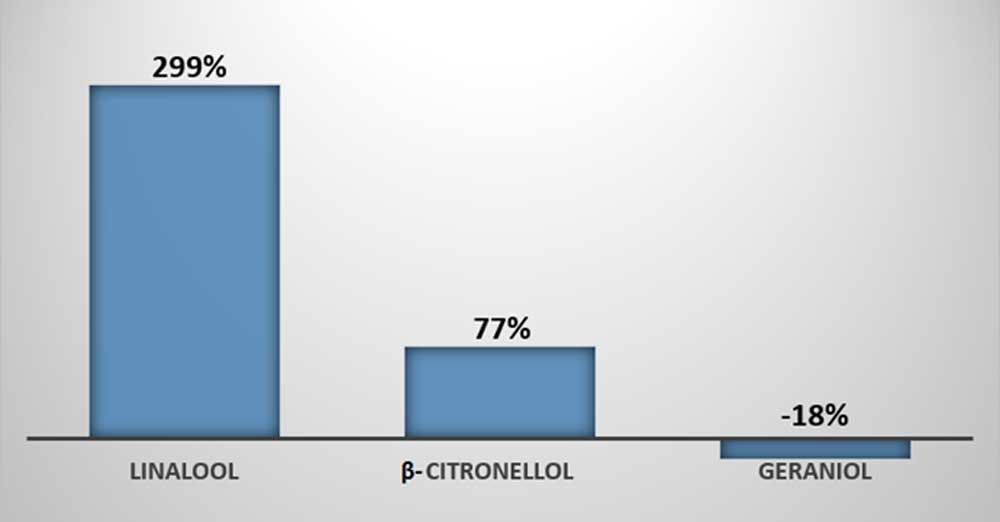 Differences (in %) in hop compounds of enzyme-treated vs. control beer measured in the head space

An excess of linalool along with the presence of β-citronellol and geraniol would boost the perception of citrusy and fruity flavours in beer. This was also observed by the tasting panel by describing the enzyme-treated beer as “more hoppy”.

A blind tasting was conducted by two different sensory panels. A general panel, formed by people interested in tasting with minimal training, and an expert panel, consisting of trained people with knowledge of beer aromas and off-flavour detection. Nine of twelve tasters preferred the enzyme-treated beer, whereas the other 3 people were indifferent. Most of the tasters overwhelmingly noted a cleaner and brighter flavour profile in the treated beer, as well as an increased hop aroma and bitterness. 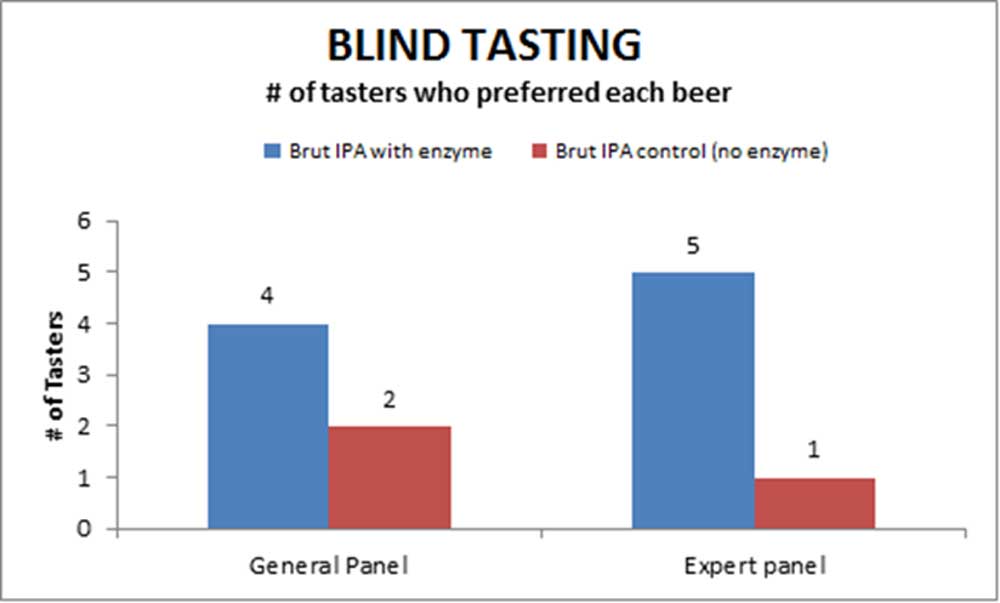 Biotransformation is something fascinating although it is yet not fully understood due to its complexity. However, it is a fact the enzymes detailed above play a role during fermentation by altering the hop oil composition, and so the sensory profile of the resulting beer. Therefore, brewers need to consider these enzymatic activities when making their choice of yeast strain and/or possibility of addition of exogenous enzymes depending on the beer style they are targeting. 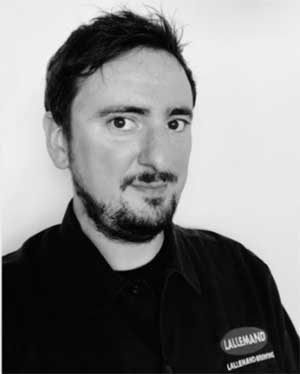