BW Exclusive: “Circular Economy In Beer Industry Can be Achieved By Collaborations” 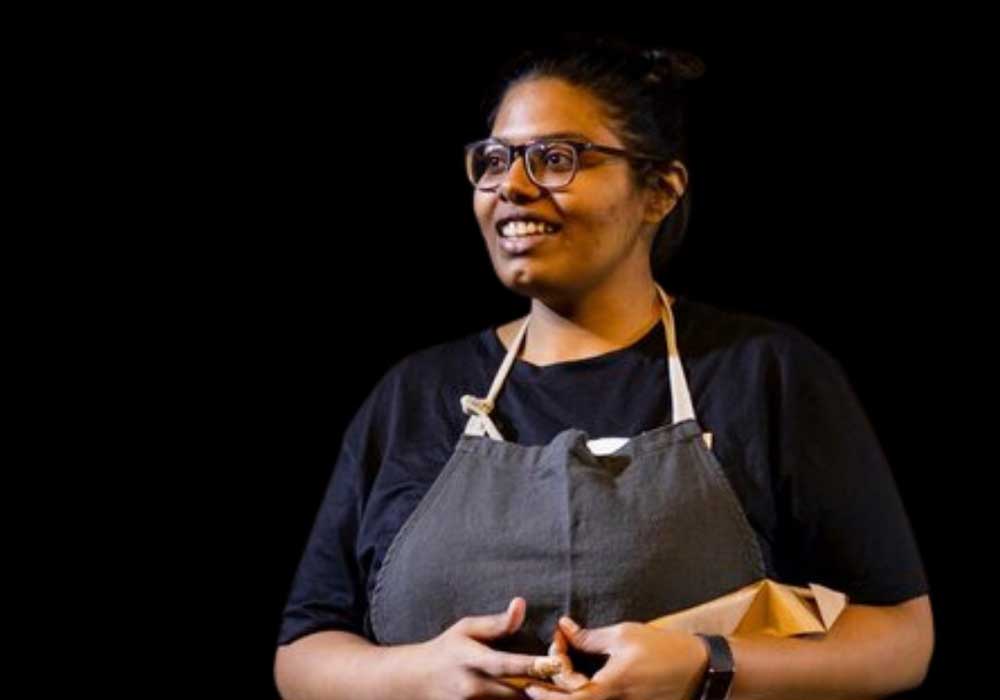 Craft beer industry these days is entering sustainability for a better world and a better future. If you are thinking how a brewery can be sustainable, it’s easy. It’s all about Spent Grains.

Beer is made by soaking grains (often barley, but also oats, wheat, and rye) to make them germinate, then gently cooking them. Glucose, proteins, and nutrients in the malted grain are extracted in the brewer’s mash tun (soaked in hot water) as part of the process for making the wort for beer, before it is boiled.  In the end, the brewery will have spent (used) grain.

It is estimated that spent grain can make up 85 percent of a brewery’s by-products. Innovative methods are being developed by craft breweries across the country to prevent wasted grains.

While spent grain is mostly used for agricultural purposes, such as compost or animal feed, there are lots of new revolutionary uses, such as powering a brewery, upcycling it to use it in food, cutlery and more. Utilising spent grains in innovative ways underscores the craft beer community’s commitment to creating a sustainable product that lives in our sensory memories instead of our landfills.

One such innovator, Saving Grains, is located in Bangalore. Savings Grains is a sustainable product brand that is rescuing these grains to make a “Good Flour”. 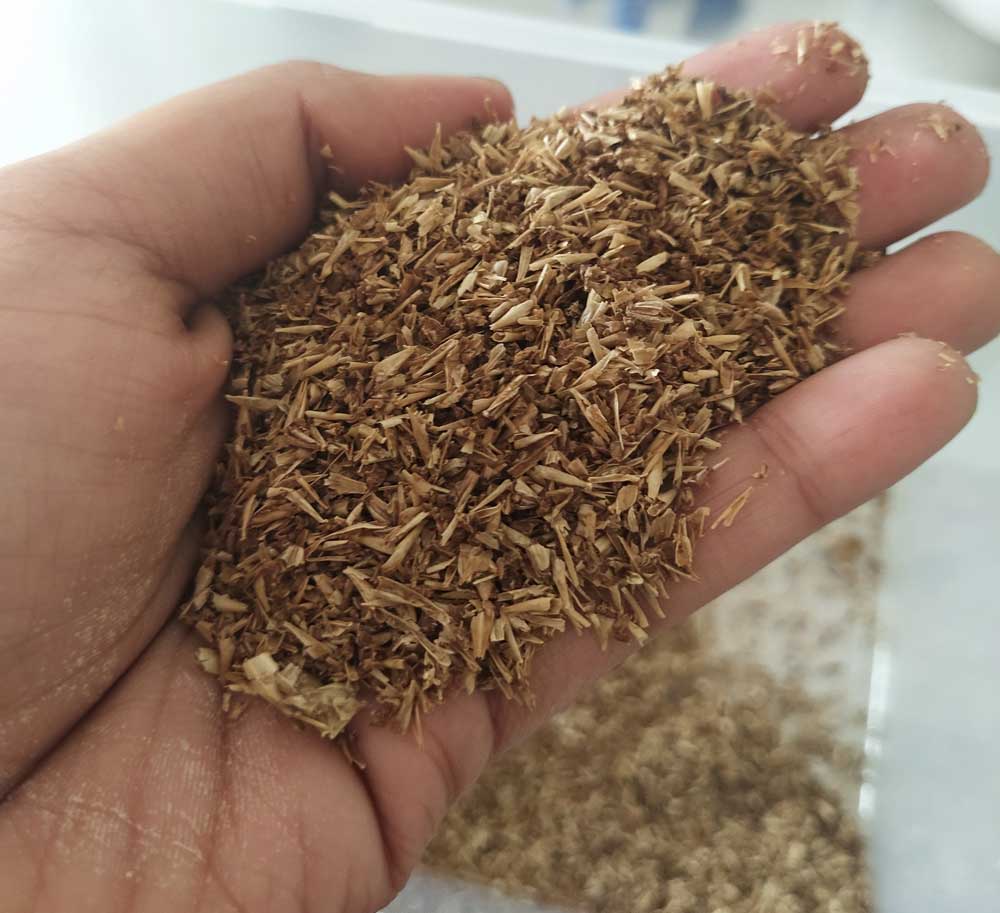 Elizabeth Yorke, the founder of Saving Grains has created a model that derives value from waste by capturing food waste streams in cities – built for communities, through a human centred approach.

Not only is this Good Flour a healthy replacement flour with its high fibre and protein, but it is also delicious, versatile and great to cook with. And it is also built on practices of circularity and sustainability, ensuring closed loop urban food systems. To understand the capability of Circular Economy in the Brewing and Beer industry, Brewer World spoke to Elizabeth Yorke. Below are the excerpts…

How can spent grains be put to good use?

An average microbrewery uses 200 kg of grain to brew 1,000 litres of beer. This grain is lightly milled and then mixed with hot water in the “mashing” stage. The liquid is then separated from the grain and then moves on to become delicious beer.  The grain which is “spent” of most of the sugars and starch that have dissolved into the water (thus spent grain), is the remaining by-product, which is sometimes directed towards cattle feed, other times discarded.

Interestingly it can also be used as people food! And that’s what we’re doing at Saving Grains.

We work with Geist brewing, from where we source the grain just after the mashing stage.  The grain is then dried and milled to make some  “Good Flour”.

But does it really taste good and what’s the nutritional value?

While the usual nomenclature is “spent” grain, in reality the grain is considered a rich source of fibre, protein, and phenolic compounds. Research studies and investigation into products that are being made from this grain across the world show that although the grain is “spent” of a lot of its starch and sugars, it still has good protein and fibre content and is potentially a great food for humans and pets and has great value as a material that can stay in use!

The spent grain we’ve sourced and tested here in Bangalore, has about 22% protein and 46% dietary fibre. It also has less than 0.1% gluten. This makes it favourable for senior citizens, diabetics and those with digestive issues.

And what I love best about the grain is its flavour. Adding it to bread, chapati, cookies – surprises the eater with great malty and earthy flavours – thanks to the malted barley base and the mashing process. 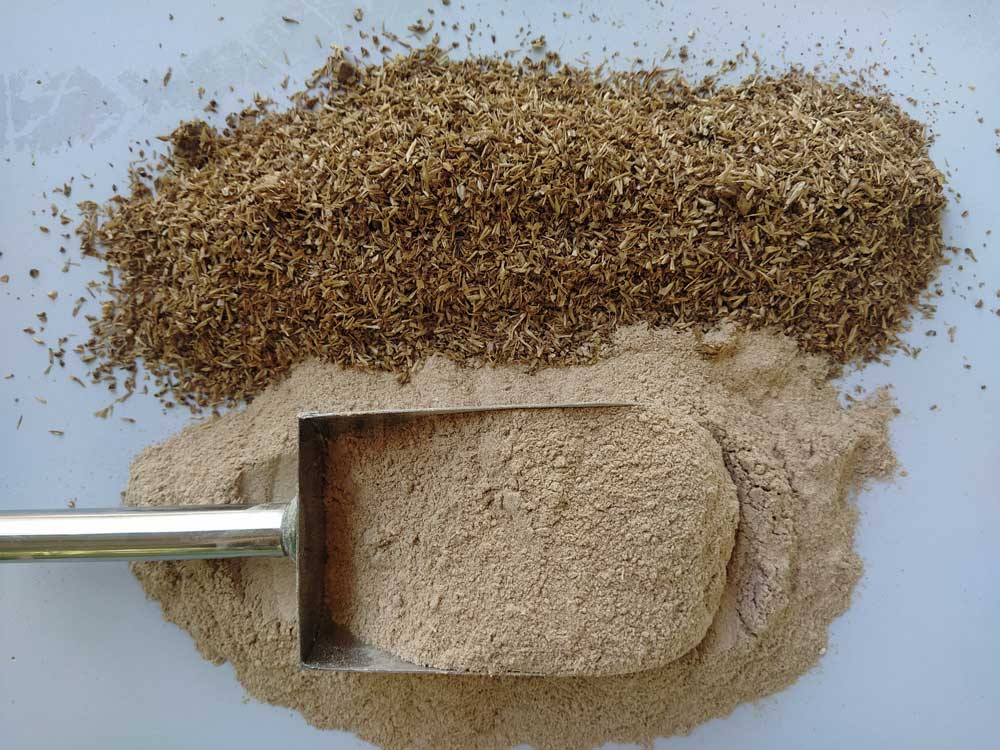 What plans do you have for the future use of spent grains at Saving Grains?

At Saving Grains, we’re currently processing small batch spent grain flour – we call it “Good Flour” because it’s delicious and has all that nutrition. The idea is to build a collaborative model to upcycle spent grain. This means everyone who participates in the process of saving these grains is involved.

We work with a really great brewery – Geist. They are a zero liquid discharge brewery in Bangalore and have a great vision regarding sustainability. They also work with the spent grain flour and have it on their menu in various forms!

Also, with a community centre called Kutumba where we’ve started using this flour to make chapati – our daily bread! This centre is focused on women empowerment and community development.

And with home bakers, and professional bakers to develop recipes and  make some good bread and good treats like brownies! The grain/flour is also being used to make non-edible materials.  Isn’t that interesting?

How can people use spent grains at home?

Our “Good Flour” is a great replacement flour. You can replace one-third of the bread/chapati flour with it. It also can (sometimes) fully replace the flour in brownies/cakes/cookies/pancakes. It can also be used to make dosa! The flour can also be used as a crumb coating for cutlets etc. We’re currently building a recipe database for this versatile flour!

How did the idea of Saving Grains originate?

I’m a chef by training and love working with bread. On an internship in the Bay Area with bread historian William Rubel, I came across an interesting piece of history.  Bakers and brewers worked in close proximity, and  shared common ingredients – Grain, Yeast, Water. And what was more exciting was that the baker would share the stale/leftover bread with the brewer (See Toast Ale)  that would be used to brew beer and the brewer would share the leftover spent grains and spent yeast with the baker that would be used in breads.

This model was really great and back in Bangalore, as I saw, microbreweries were blossoming and sourdough baking was on the rise. I started experimenting with spent grain, while I worked with a restaurant that prided itself on innovation.

My curiosities on building better food systems took me to the Future Food Institute in Italy where I was part of a cohort of 15 researchers from around the world. Here my focus was on circularity and sustainability in the food system. We spoke to around 160 people in food to understand what sustainability meant to them and explored different models organisations and cities adopted for circular food systems. This research gave me a great foundation and inspiration to prototype the Saving Grains model.

The pandemic provoked thought on our intensive dependencies on rural-agricultural systems. There was this delicious nutritious product that was being discarded right here, in our cities: Spent Grain! 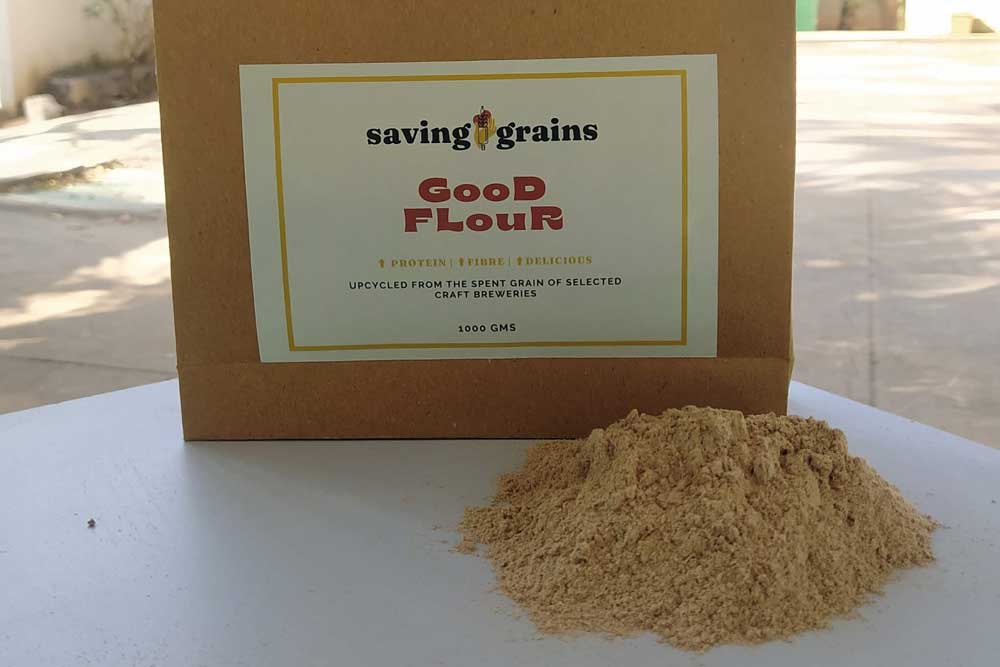 What’s your vision for Saving Grains?

Our vision for Saving Grains is to create a scalable circular model in this food economy that is accountable, transparent, collaborative and puts people at the heart of the project.

One can only imagine what that figure would look like in 2030!

But Saving Grains is not just about upcycling and creating a product alone. It’s about people and the beer community. Relationships between brewers and bakers (and their community) have been around since the beginning of time. (which came first, beer or bread!).

What is the potential of those relationships in today’s times? What would they look like in Bangalore’s pub city? How could these relationships help strengthen the beer industry, not just by looking into spent grain as an affordable and nutritious food source, but by engaging people every step of the way and creating spaces and opportunities to increase their incomes, build community, improve their livelihoods and create an atmosphere for responsible food citizenship.

The idea for this potential model comes from research into how food spaces can nurture food citizenship through the circular economy. Often when we think about the circular economy in food, keeping resources in use is a priority. But what if we put the world’s largest resource – human beings – in the centre of this economy.

We can use grain as a tool to add value to so called “waste” by working closely with natural systems and technology to empower people and communities around us for now and certainly the future. 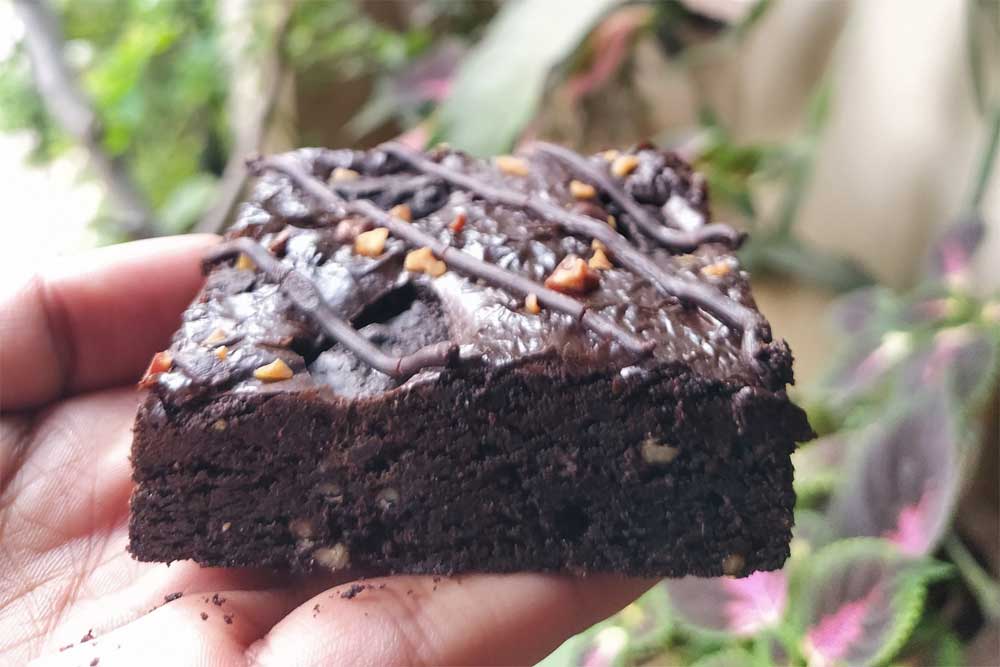 What’s been the biggest obstacle?

Few people know about the deliciousness of Spent grain! Being able to share this product I think is an exciting yet tedious process as there is so much confusing information on food to process already out there!

How will Saving Grains change the negative impact created on the environment by the beer industry?

“Food Waste” is a global issue. One-third of food produced for human consumption is lost or wasted globally. By upcycling existing resources and creating a market for by-products  like spent grain,  we aim to reduce the costs, resources and reliance that go into making newer resources for our nourishment. 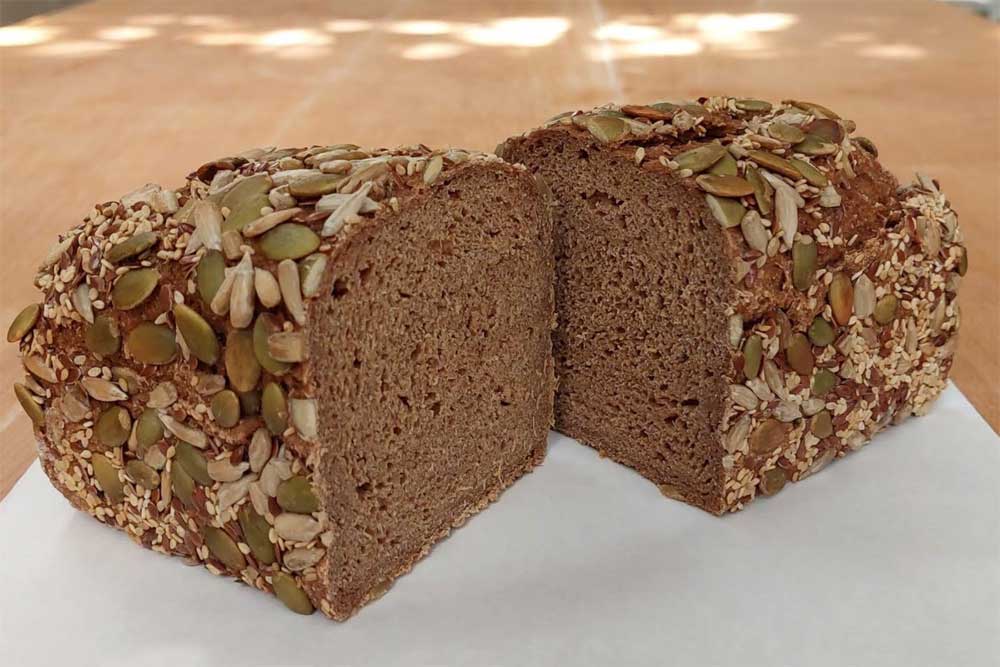 What are the products Saving Grains has been successful in producing?

At Saving Grains, we are currently making a spent grain flour that we call a “Good Flour” – because it’s delicious and has all that nutrition. As mentioned above we have also worked with some home and professional bakers to produce bread, brownies and more.

Sustainability is transforming into a competitive landscape. What do you have to say about this?

Increasingly the words sustainable, circular economy, responsible, are being used by small brands, individuals, and large organisations to communicate that they are invested in building better food systems. And that is really fantastic that people are listening and thinking about this.

But when we stop to ask the how’s and why’s we find more questions than answers. We sometimes see blind adoption of certain concepts or ideas that could do more harm than good, or in some cases just words and no grounded action. We find ourselves lost in the sea of literature and studies around the food system which are based on principles derived from Western philosophy that often overlooks the rich and varied cultural component that a country like India brings.

So, how do we understand sustainability in the Indian food system? What good practices traditionally exist? What global principles can be adopted? What are our constraints considering our context and how can we overcome them to build more resilient food futures?

We’re asking ourselves these questions and consciously trying to build a model that can nurture and nourish the community and the environment. 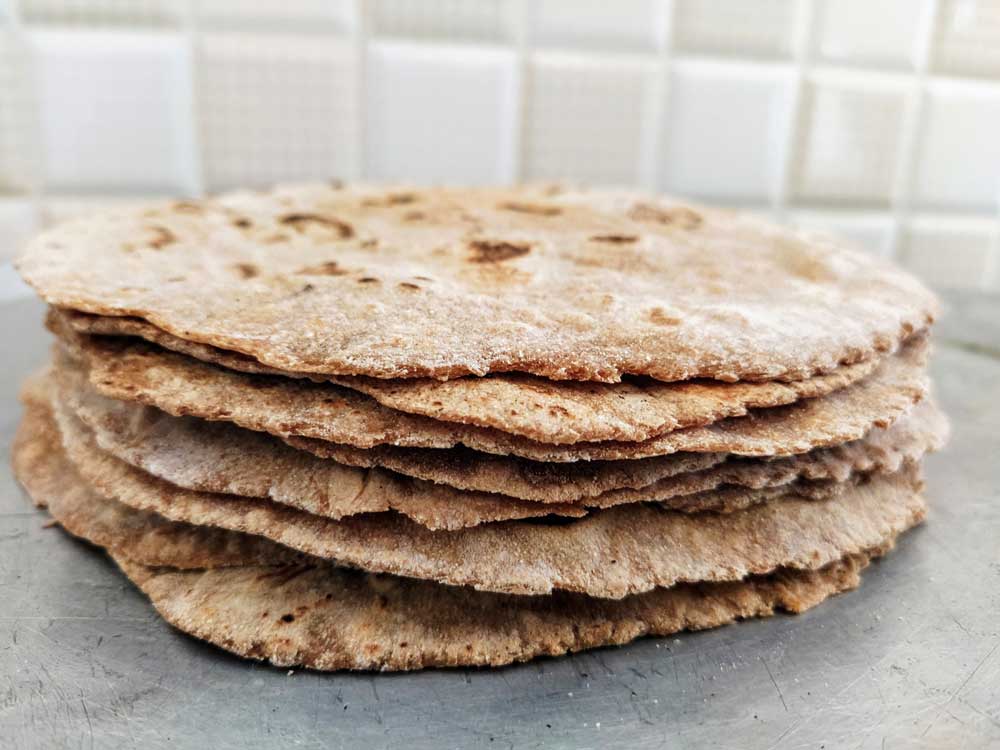 How do you think “circular economy” in the beer industry can be achieved?

There’s so much I don’t know about the beer industry. But what I do know is that both the by-products of spent grain and spent yeast are insanely delicious. I also know that chefs or food businesses are always in search of ingredients with great flavour.

I think circularity in any industry can be achieved by collaborations and looking at how other industries can also participate and benefit.

Geist brewing is a great example of how partnerships with other spaces can create robust circular systems. They have created various partnerships with local farmers who use leftover material from our factory, like spent grain and denatured yeast, to supplement poultry and livestock diets. Even the RO reject water from the plant is converted into agricultural grade water and supplied to farmers in the neighbouring property, where they use it to grow vegetables.

Geist works to repurpose wooden pallets  into usable furniture for the factory and are currently working with an incredible sustainable materials designer – Khushboo Gandhi who runs Go Do Good – to create usable products from spent grains.

To be able to work with Narayan Manepally and Vidya Kubher has been really wonderful. Their support as we test out the waters with new ideas is incredible. That’s the kind of support and collaboration needed to build circular models in our food system!