This interview is a part of Brewer Talks, a continuing series of interviews with the Brewers of the beer industry and community from across the world. Brewer World will share business and personal insights from Brew-masters, Head Brewers, Brewing Managers each week to help build the industry network and consumers understand beer well.

India and many countries throughout Asia, like Thailand, Hong Kong, and South Korea, have experienced a boom in craft beer sales as consumers switch from the mainstream beer that has long dominated the local market to palate-expanding imports and microbrews. The laws governing India’s 29 states have tightened in some regions and loosened in others, making it difficult for an actual craft takeover to take place. Several states (including Gujarat, Manipur, and Nagaland) have even implemented strict prohibition policies, contrasting starkly with the growth of craft beer in cities like Mumbai, Bangalore, and Pune. Adding to the list is Pondicherry. The Paris of East recently saw its first brewery, Catamaran. The beers at Catamaran are receiving much love from the beer community. The man behind the beers getting so much love is Suryakant Balgovind Singh.

Suryakant, the 28-year-old Head Brewer at Catamaran, has worked with various Breweries to date. Before Catamaran, he worked with Doolally, Pune, for four years. Before which he has worked with breweries like Effingut Brewerkz and Smokies Brewing Company. Suryakant spoke to Brewer World to share insights about brewing and his journey as a brewer. Below are the excerpts… 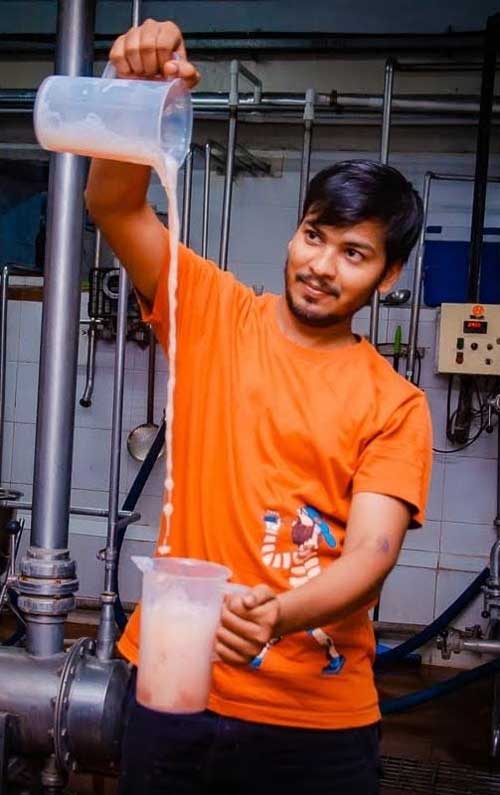 When did you start brewing?

I brewed my first batch of 500lit Hefeweizen in July 2016. Usually, people start by homebrewing the beers, but in my case, it was different, and that is all because of my mentor Hrishi Sasane, Head Brewer, Effingut, Pune. He always wanted me to push the boundaries and said, “Don’t follow the SOP’s blindly, do things differently if you feel it can be done better, you will get a lesson at the end, that may be a good one or a bad one.”

Are you formally trained?

Yes. I did my Bachelor’s in Biotechnology, and after that, I wanted to choose to do something that every other student would not do. So after a lot of narrowing down on the courses available, I got into VSI, Pune, to pursue Masters in Wine, Brewing, and Alcohol technology, which specialises in winemaking. But, soon after completing my first year, I got an internship opportunity at Effingut, which changed the whole perspective. I decided to take up winemaking as a hobby as brewing beer had become my passion.

How would you describe what you do?

Now that is quite a complicated question. As a brewer, we have to conduct research, process development, brewery management, purchase of raw material, beer sales, staff training, electrical and mechanical instruments maintenance, brewery cleaning, and more. I do anything and everything in the brewery space. Sometimes, I will also have to design and plan for expansion and installation, and excise bookkeeping. 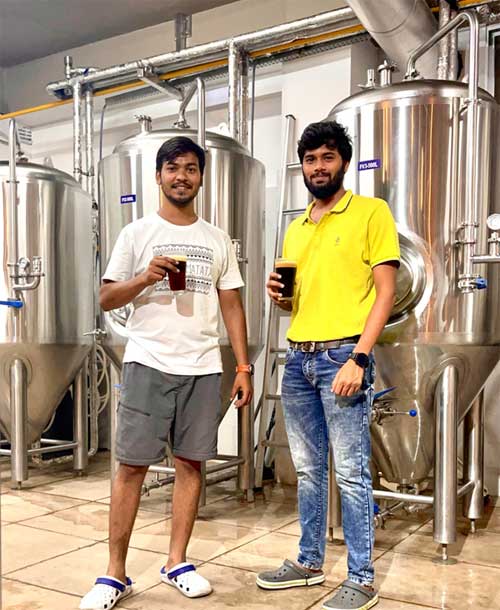 Suryakant with Abhishek Ukarde, his fellow brewer at Catamaran

You brew at Pondicherry’s first microbrewery. What’s the vibe like?

Catamaran Brewing Company is my first independent project. Being here from ground zero is such a proud feeling. Oliver Schauf has been the best guide and a great support system and motivation. Pondicherry has its own drinking culture but into Brandy and similar forms of liquor. And to my surprise, they have been supporting craft beer in a very similar manner. So the vibe is matching here!!!

What is the crowd’s reaction to the new craft beer scene in Pondicherry?

Pondy has a mixed crowd of Indo-French and other European populations; hence, they know craft beers. So they are pleased to get craft beers in Pondicherry. Especially the Belgian Witbier, Stout, and IPA. Now, they don’t miss home a lot and have become a family for Catamaran.

Which beer is Catamaran’s most popular?

Like any other microbrewery wheat-based beer, Belgian Witbier leads the sales, followed by Cider. After that, Helles Lager, Smoked Porter, Oatmeal Stout, Märzen, Black magic Lager, and Hybrid Dark Lager are others people like. But to my surprise, Pondy is also ready for IPA, so we are giving them some nice Hoppy-ness.

How do you develop new beer recipes?

Usually, it’s a motivation from one or the other thing around. Sometimes a random communication with brew buddies or news articles or a walk in the market leads to an idea of making certain styles of beer. Once I have the statistics desired in the beer, I formulate a basic recipe and brew a pilot batch to check at what level the beer stands. Then I note down the changes and brew another batch to fine tune it. Once I get the desired characteristics, I scale up the recipe and brew it in bigger batches. 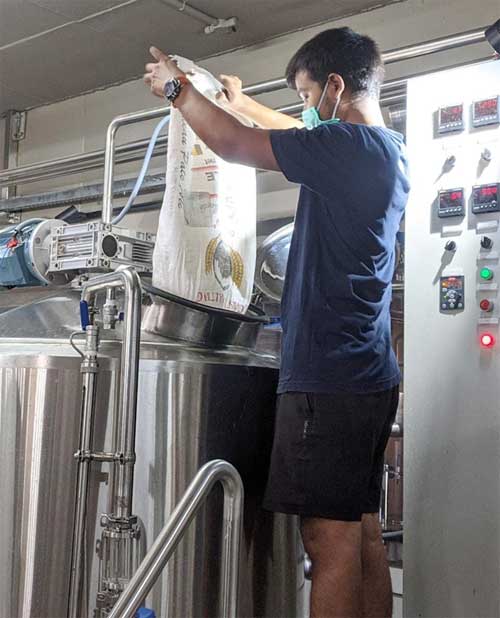 Which beers do you plan to brew over the next few months for Christmas and New Year?

This time I will be following Pondy’s brewing tradition by making a Hot Mulled Cider. Besides this, we have concluded our trials for Spiced Strong Ales for the cold and festive season. “Single for 60 min” is one beer I’m looking forward to brewing. It is the single hop version of 60min IPA from my original recipe.

Do you have a favourite beer and food pairing?

I don’t go drinking beer alone. So, I choose the beer, and my friend, a food expert, picks the food. Wood-fired Pizzas have been the go-to pair with any style of beer. Sausage platter at Toit, Spiced Namak para at Bira taproom, Pretzel bread basket at Seven Rivers, and the delicious Pizzas at Byg Brewsky, Hennur, and Bier Library have some of the best dishes that I love to pair my beers with. Of course, salted Peanuts have been the best pair for beer and any other alcoholic beverage if nothing is available.

In the brewing industry, who do you admire?

I admire Amar Shrivastava the most. He chose the Ministry Of Beers to change people’s perspective on beer. Narpat Singh at Gurgaon is on fire. Sandeep Malvi and Kapil Srivastava have made great beers at Big Pitcher, Gurgaon. Harshvardhan is changing the face of Bira.

In your opinion, which brewery is the best in the World?

It’s not the brewery but the team that makes it the best. Effingut and Doolally top my list of the best.

What would you drink if you could have just one drink, one last time?

Snake Venom, from Scottish brewery Brewmeister. It is the world’s strongest beer. I will die after drinking it, so let the culprit be beer, not my age or health. (Giggles) 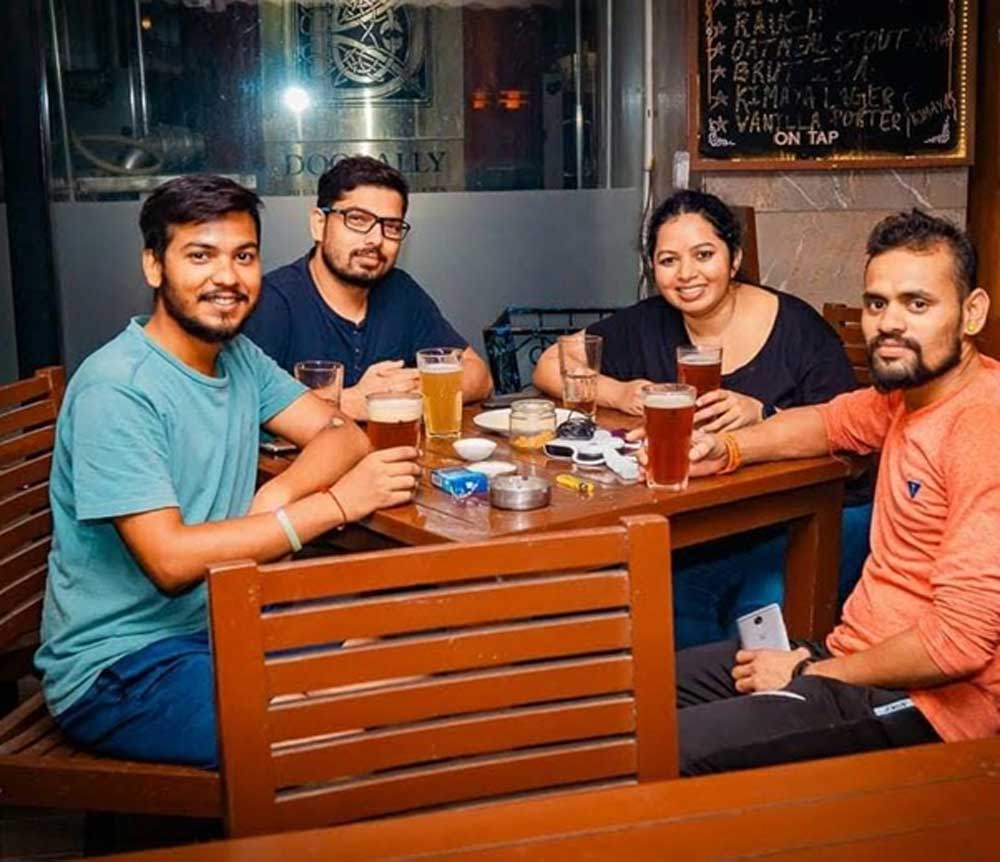 Tell us about yourself.

I was born in Lucknow but grew up in Pune. I wanted to become a Pilot, but Breaking Bad had different plans. The web series Breaking Bad inspired me to take up Biotechnology. Lab research in DNA hybridization and Gene sequencing excites me.

When you’re not brewing, what else do you like to do?

Traveling, painting, and hanging out with friends is all I do when I am not brewing.

How excited are you about the Beer Of India Awards?

I am very much excited to be a part of the Beer of India Awards and looking forward to participating and marking the presence of Pondicherry in the Craft beer world.