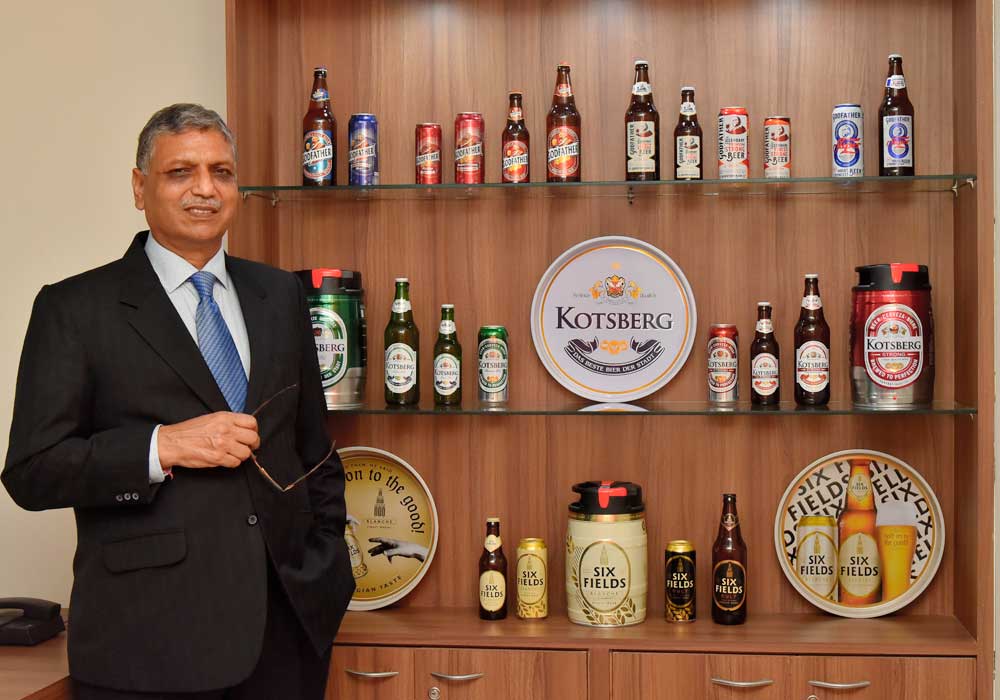 Since the last two decades, beer has played an integral role in elevating India’s social and cultural status. A number of favourable factors have worked in tandem to bring about this shift in preference from the traditionally consumed high alcoholic hard liquor to a lighter, low alcohol choice like beer. Over 30 per cent of the country’s total population comprises youth, and beer consumption is increasingly becoming part of their social interactions. Higher disposable income amongst India’s middle-class segments and an increase in more working women who have also started leaning towards beer as their drink of choice as social drinking becomes a more adaptable lifestyle in metropolitan cities and tier 2 cities.

At present, there are over 60 beer brands available in India. Together, with the 200 plus microbreweries which have sprung up over the last ten years and the opening up of higher export potentials for Indian beer brands with increasing support from the government – India’s beer market stood at a value of nearly INR 371 billion in 2020 and is further expected to reach approximately INR 662 billion by 2026, exhibiting an estimated CAGR of about 9.2 percent in the next six years. 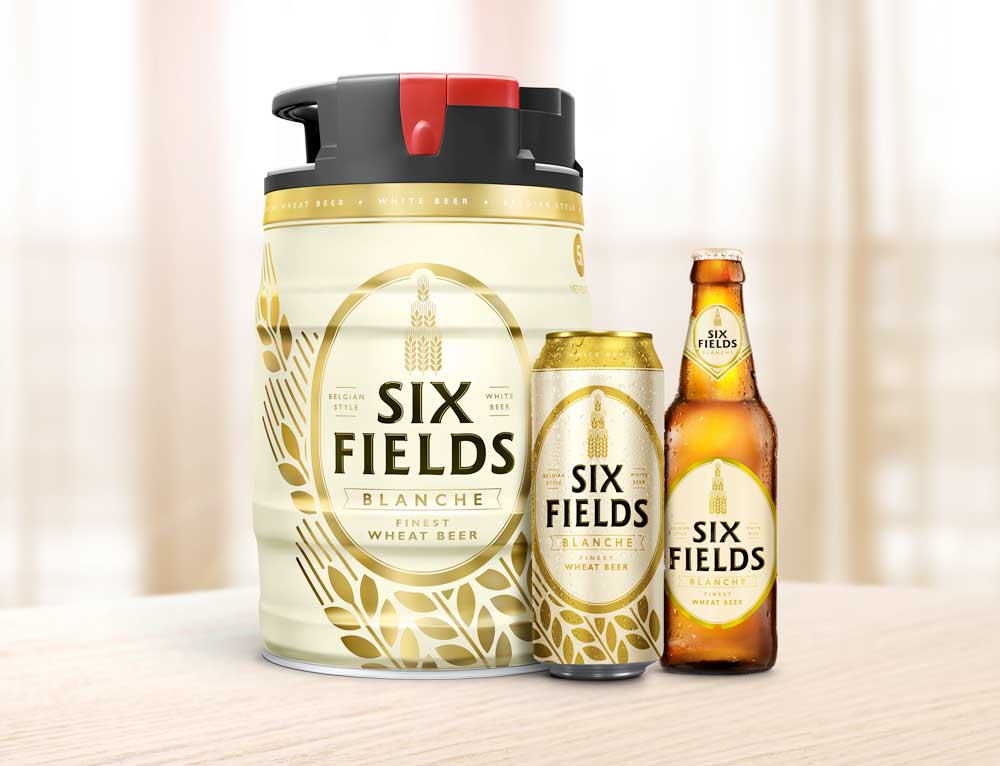 That being said, setting up a beer business in India’s heavily regulated alcohol market with excise laws that vary from state to state is no easy task. According to Mr. Prem Narain Dewan, Managing Director of DeVANS Modern Breweries Ltd., establishing and running a brewery is more challenging particularly in North India where the bulk of the country’s beer sales take place in summer between the months of March to June.

“Beer is a high-volume low margin product and breweries require huge investments. It is also a very technical product and minor negligence can make major differences to the quality of beers. Quality has been our major focus in both our breweries at Rajasthan and Samba (Jammu). In fact, we scrapped our old Jammu brewery in 2014 only because we were not happy with the quality of the beers which we were brewing at that facility and there was no scope of improvement there, though the quality was much in keeping with the normal beer quality during those times.”

Additionally, with alcohol falling under the state list, all of India’s states have their own state-specific excise policies. As such, the Indian beer business scenario is not easy to navigate. Despite this, DeVANS Modern Breweries Ltd. – the manufacturer of not just one, but three well-established beer brands – Godfather, Kotsberg and Six Fields, maintains a flawlessly smooth distribution and supply to over 20 Indian states as well as managing exports to many Eastern, Mid-Eastern and South Asian countries.

“It does sound complicated but the pieces do fall in place as you expand,” says Mr. Dewan. “Different States follow different policies for marketing of liquor. While some decree that the manufacturer has to have its own warehouse in the State, several States do not have this requirement. As such we have our own warehouses in Himachal Pradesh, Uttar Pradesh, Jharkhand etc. while we depend on distributors in the States which do not have this requirement. The main challenge really comes in sales and marketing and we have quite a big team for this purpose.”

When asked about how he found his way into India’s beer business, Mr. Dewan reveals that he comes from a family with decades of experience in running  the liquor trade in Jammu & Kashmir. Dewan Gian Chand, his father, entered the liquor trade in 1942 with wholesale depots and a couple of retail shops in Jammu and Srinagar. “I was destined to take the route of manufacturing beer and liquor,” he chuckles. 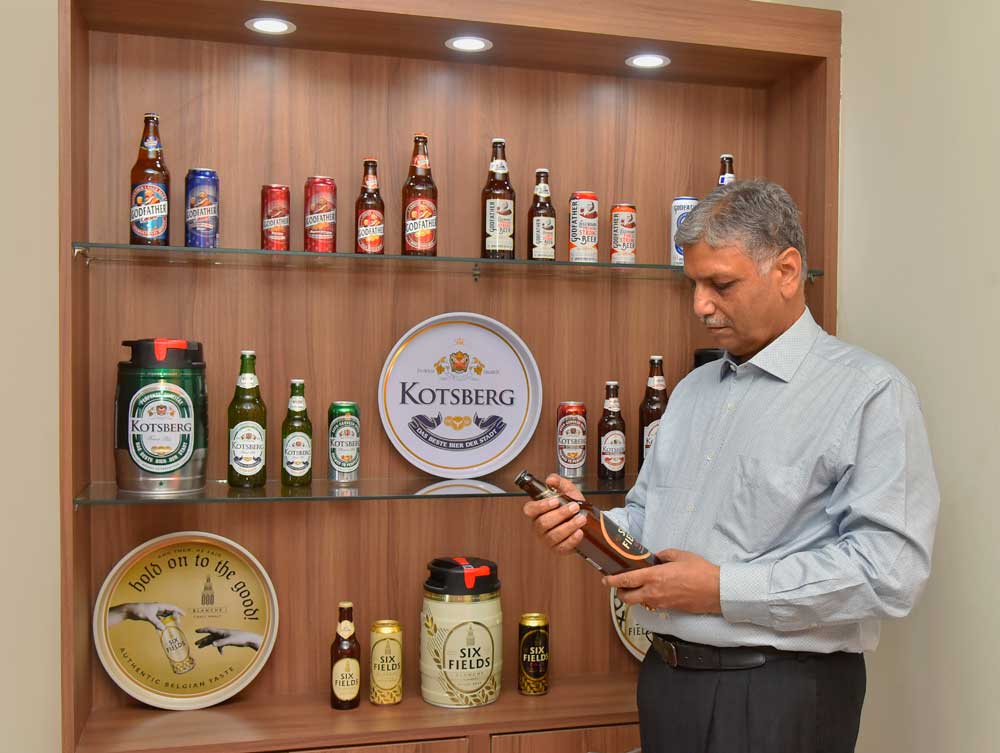 After walking away from a career in engineering during the counselling stage at IITD, Mr. Dewan graduated with a Commerce degree and completed his academic journey with a postgraduate degree in Law.

“I have no regrets, walking away from the engineering show. I joined my family’s business in liquor manufacturing and trade immediately after completing my graduation in 1976 and there has been no looking back since then” – Mr. Dewan.

DeVANS was established in 1961 at Jammu as a small liquor bottling plant. A small brewery was added to this set up in 1967 with the objective of producing quality  beers. “There were only two brewing companies in India at that time- Dyer Meakin Breweries and United Breweries; with Dyer Meakin having the major share of beer sales in the country,” says Mr.Dewan. “As such the know-how to make beer was very limited. However, the plunge was taken in 1967 and we started bottling beer with a soda water filling machine! The rest, as they say, is history.

We had a brewery license to manufacture beers. My father Sh. Gian Chand Dewan, is rightfully the pioneer of industries in Jammu & Kashmir as he took the bold step of putting up the twin liquor and brewing units in Jammu when there were hardly any industries in the area. He was adamant to have someone come and make beer for him in the lab after which he would go about setting up the unit. It was only after Mr. Satish Kohli, a brewer from Dyer Meakins, Solan who came and made the beer in the lab that the actual process of putting up the initial small brewery was put in place.”

Interestingly, while DeVANS started beer production in 1967, it was not until 1978 that the company installed its first boiler which was a must-have for the production of beers.

“We had finalized a brewmaster in the early ’70s, who after the interview, went around the factory and never came back as he could not reconcile with the fact that a brewery could be run without a boiler” – says Mr.Dewan. 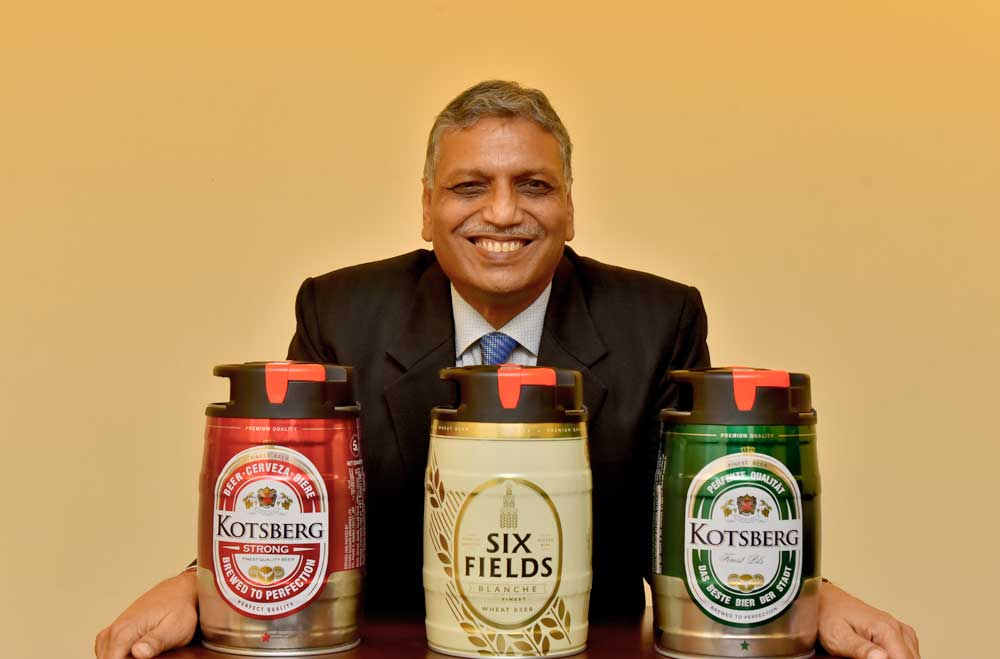 Today, DeVANS has two successful world-class breweries – one in Rajasthan (commissioned in 2006) and another at Jammu (commissioned in 2014). “The new Jammu brewery was set up after shutting down the old brewery due to quality issues. A huge malt spirit manufacturing and maturation facility has also been set up at Jammu. There is a complete focus of the group on quality and we now have premium products in both the beer and liquor segments,” says Mr. Dewan.

Between Godfather, Kotsberg and Six Fields – DeVANS’ beers address India’s huge youth population of beer drinkers. “All our brands are now targeted at the younger segment of the population which is the reason why we have now launched our flagship brand, Godfather – The Legendary Beer. It would be interesting to note that Godfather was originally launched as Rajguru but was initially marketed only in J&K. However, the name Rajguru was replaced with Godfather after a couple of years and there has been no looking back since then. Consequently, the visual look and feel of the brand has also evolved to take on a new packaging with a fresher, more modern, youthful look.

We have also recently launched our Six Fields Strong Wheat Beer which is a genuine Belgian Style Wheat Beer with 7.2% alcohol which is, once again, targeted at the younger generation. Despite this beer’s high alcohol content, we are confident of its success amongst the youth because of the sheer faith we have in the recipe we have created for this brand. 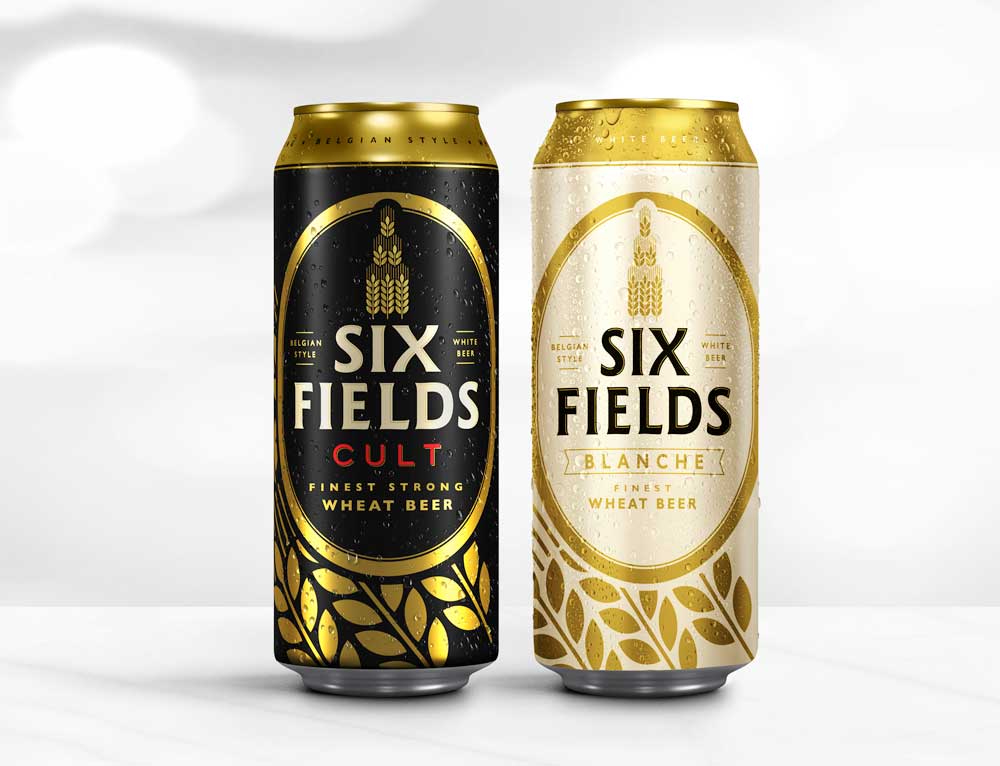 Kotsberg, our premium craft beer, is brewed only with malted barley and quality German hops and no added sugar. This brand was launched from our brewery in Kotputli, Rajasthan – since there is a hillock behind it as well, we decided to call it Kotsberg as “berg” is German for “mountain”. 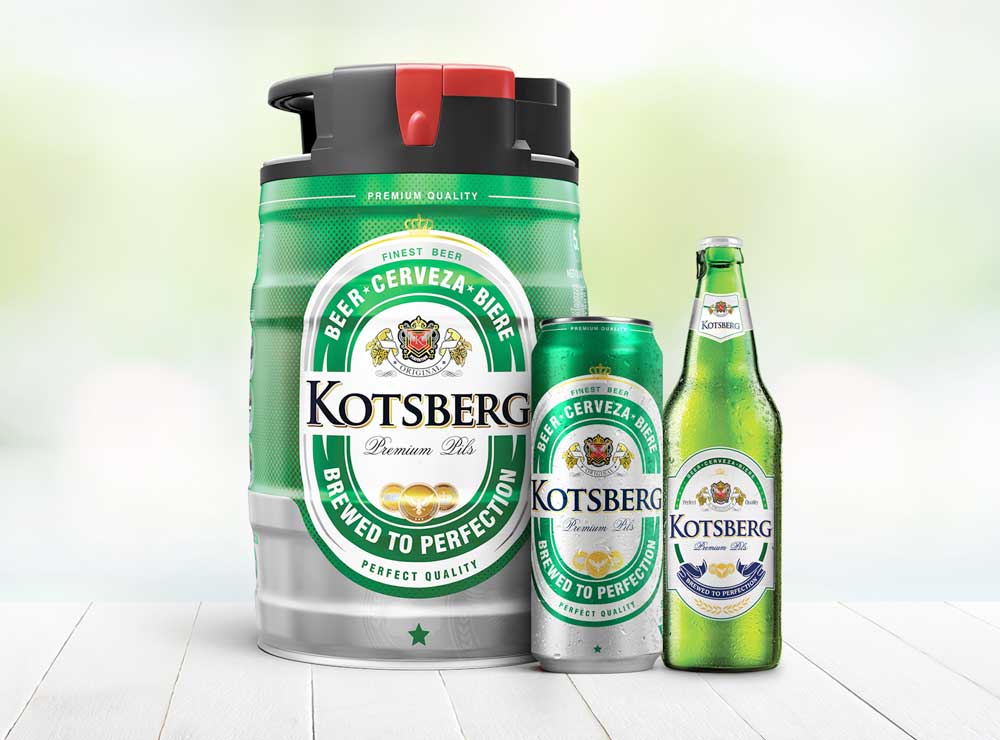 “Wasn’t it daunting to make the step over from commercial to premium?” we asked Mr. Dewan.

“We have evolved! And for this, we have to thank our consultants and our Quality Control staff at our two world-class breweries. Our unwavering attention to quality has helped us in launching new quality products into the market. We are still quite small even by Indian standards and as such venturing into the premium beer segment was a necessary corollary. It’s important to note that all our beers are made with natural ingredients and we do not use aroma in any of our brands.

Both DeVANS and its brands have received significant accolades, both on a national and international level. In 2008, DeVANS Modern Breweries Ltd. became the recipient of the International Star Award for Quality in Geneva. “It was indeed a big win and a great boost for us and proof of our total commitment to quality,” says Mr. Dewan proudly.

In 2020 – Godfather, The Legendary Beer and Kotsberg PILS – bagged the Gold awards in the strong and light beer segments respectively while the wheat beer-Six Fields won the Silver in the Spiritz Selection Awards, Delhi where all beer tastings were conducted blindly i.e. nobody knew the brands they were tasting.

With super-mild beers making an entry as a separate category in the Indian beer market landscape, and NOLO (no and low alcohol) beers slowly trickling into grocery aisles as well, where does India’s love for strong beer currently stand? Do today’s young Indian beer consumers still have a palate for high-ABV beers?

“In India the majority of the Indian beer drinkers still lean towards strong beer. The figures are there for all to see. Strong beers form a major production volume of all breweries and the trend percolates to all States without any exception. Yes, you probably get only the normal light beers in most of the star hotels in the country or even in restaurants, but they form a very insignificant part of our total beer consumption,” explains Mr. Dewan. 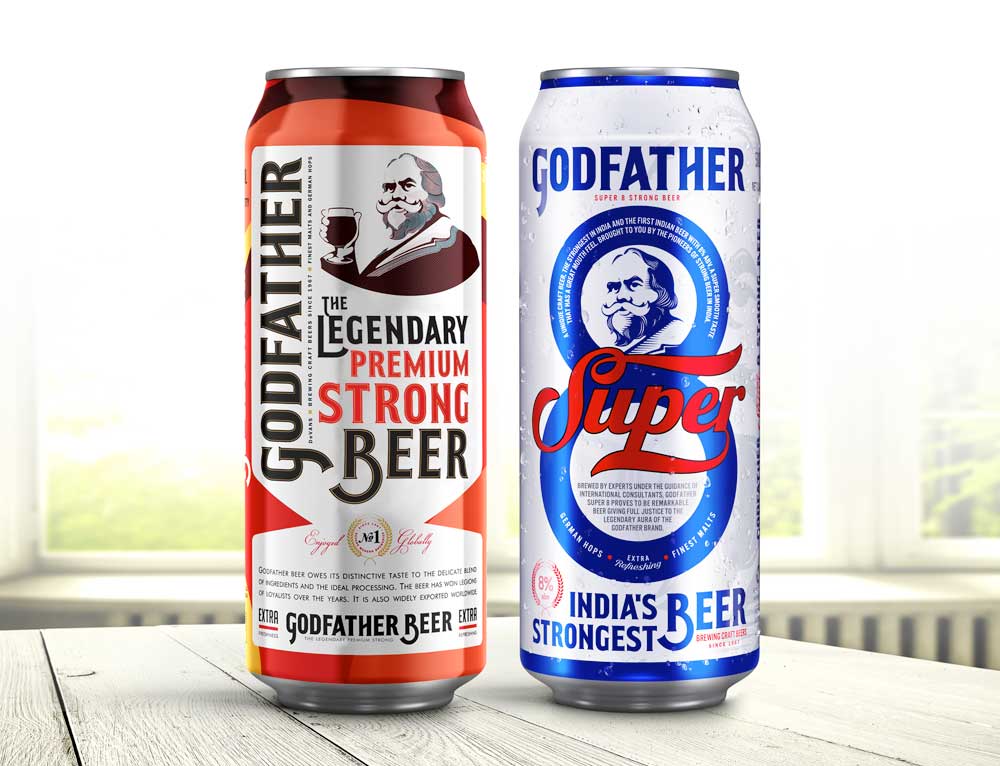 “In addition to our strong wheat beer from Six Fields, our newly launched Godfather Super 8 – a beer with 8% alcohol has also been a hit with our audience. We would also have loved to produce beers with even higher alcohol but unfortunately, the beer specifications in our country do not allow for that. We are not afraid to experiment and are sure this will hold us in good stead in future.” – Mr. Dewan.

As far as the palate for beers is concerned, Mr. Dewan is of the firm opinion that while cuisine could vary from state to state, drinking culture remains the same. “We believe that when the quality of the beer is top-notch, the palate becomes inconsequential. The preference could vary in SKUs but not in the palate as such. A good beer is appreciated everywhere,” he says.

“And just how lucrative is the Indian beer market today?” we ask.

“As mentioned earlier, beer production is a high investment, low-margin business and as such breweries have to depend on volumes in order to achieve economies of scale and generate profits,” says Mr. Dewan. “We are running two breweries at the moment and unfortunately, both are located in the North where the major sale window is just about 4 months only and it’s all high competition after that. As such the regional breweries do not really make much profits in the North. The position is even worse for new breweries who have to come up with new brands of their own. However, the situation seems to be much better for breweries in other areas of the Country.

The silver lining is, we are a huge country with a high percentage of a young, educated population willing to experiment with new beer styles. We already see this trend in the micro-breweries that serve different styles of beer. Some of which are available in the Country for the first time. However, quality is going to play a big role and breweries would have to lay full focus on quality if they wish for new beer styles to be successful.”