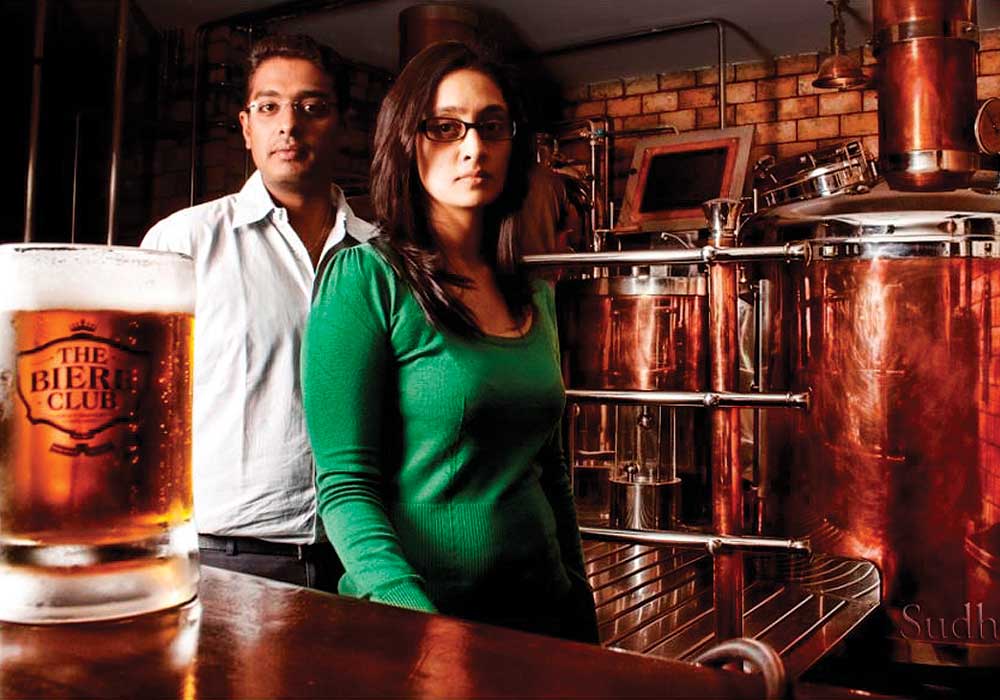 One of the earliest brands to set up a micro brewery in Bangalore, in Karnataka, The Biere Club’s  founder duo Arvind Raju and sister Meenakshi Raju have  an interesting tale of struggle, hard work and  success to share with newcomers in the industry.

Bangalore, with its tag of India’s first “Pub City” should have been the first city in the country to set up a micro brewery. But Gurgaon beat Bangalore to it, due to many operational and policy reasons. However, The Biere Club today is one of the city’s and India’s best known brands for craft beer.

The story started in 2008, when Arvind, a graduate of Hotel Management from Christ University, planned to return from his job in the United Kingdom, and set up something interesting in Bangalore. With a family background that covered all aspects of hospitality-star hotels, and resorts, there was little doubt on the industry to invest in. But there was something else needed. The plan clicked when his sister Meenakshi
also decided to return to India from her corporate alliances abroad. Meenakshi wanted to bring craft beer to India, and had ideas of a franchise. But the market was not big enough for a global brand to make inroads, so they decided to go on their own–and create the market.

Research revealed that there was no policy on brewing and microbreweries that would regulate the business. The Rajus made a presentation to the government of Karnataka, “it was very well received. We had actually made a whole presentation on what was needed and how it should work, to get the policies in place,” Arvind recollects.

Two years and innumerable meets later, the policy regulations for setting up and running a microbrewery were created. The team took these two years to prepare for the task of identifying equipment and experts, getting the base work done. There is a regret though,” If Karnataka was faster we would be the first microbrewery in the country. But Gurgaon was faster, we got delayed in Bangalore, so we were the second to set up.” 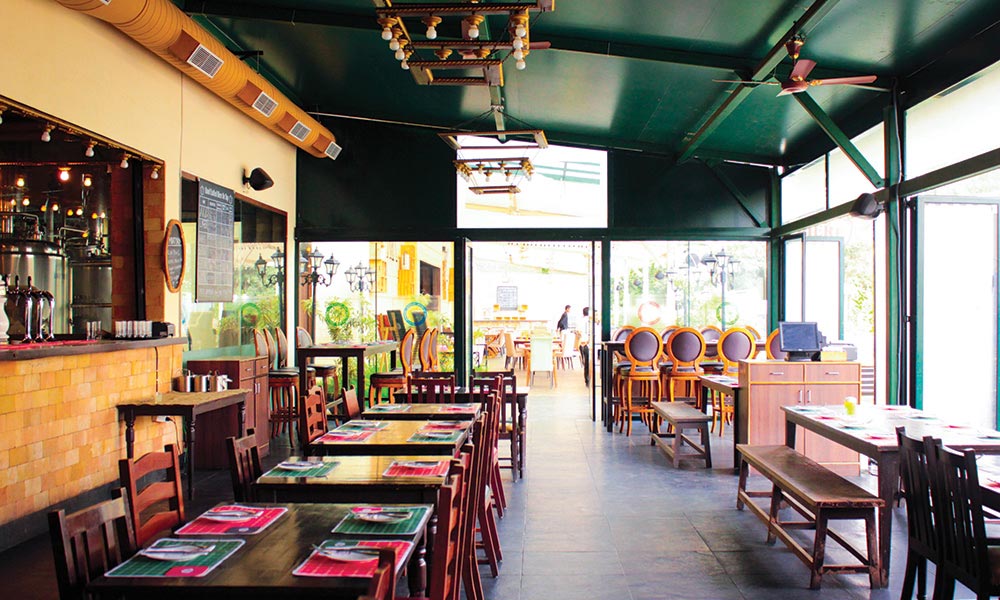 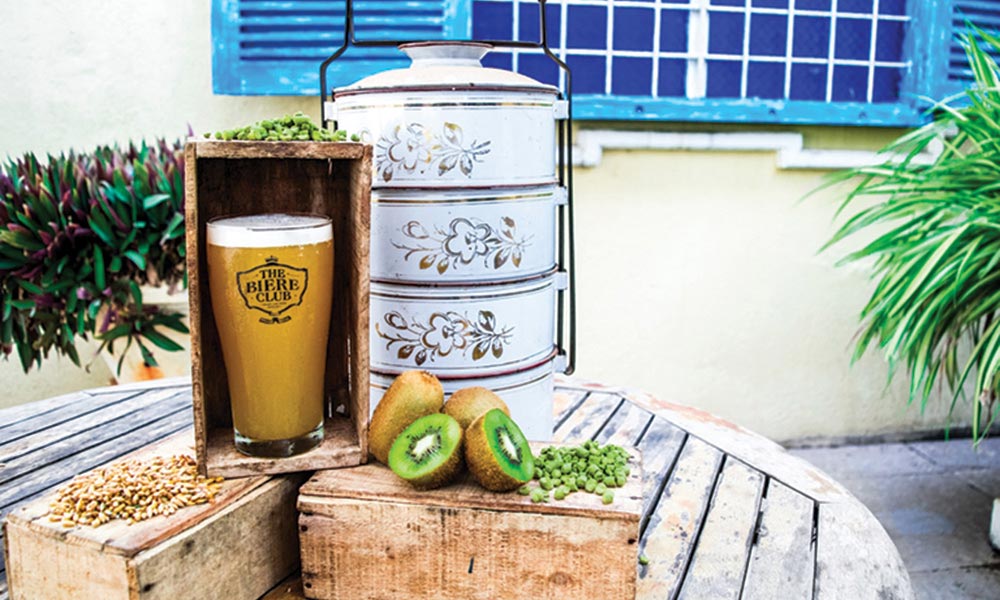 Today there are very clear lists of documents,  processes and permissions. There is nothing under handed, everything you need to get is above board, and that is a relief for the people who are planning to get into the industry now.

At that point there were a few entrepreneurs in Bangalore, who decided to work together in creating the regulations where there were none, to create an industry of microbrewing in Karnataka, and succeeded. “It was money, hard work and a long wait,” Arvind says. But it was worth it, because the group was opening the doors for an entire industry- that would create a lifestyle statement, provide employment and add to revenues.

This was the biggest challenge to the birth of The Biere Club. But it was only the processes to be created, because once those were in place, the growth started well. Today there are very clear list of documents, processes and permissions. There is nothing under handed, everything you need to get is above board, and that is a relief for the people who are planning to get into the industry now.

The Biere Club opened its doors in May, 2011, and Bangalore had a hip new place to hang out with the first mugs of crafted beer the city would see! The capital costs were not small, nor was the effort. The brand boasts of Chef Shaun Kenworthy as F&B head, showing they do not take their F&B lightly, even if craft beer is the focus. Equipment was the key to a good beer, so there could be no compromises. “Back then India had no equipment manufacturers, so we chose German brewery equipment, and the cost worked out to be pretty steep. But yes, over the years, there are many entrants to the field of equipment manufacture, and all are selling well. You can get equipment from China, or Europe or even US, but what’s critical is maintenance. Most good brands, also from China, offer good after-sales service support as well. But we learnt the pioneer way, for the second brewery, we got the designs and got the equipment manufactured in India at almost half the cost,” Arvind tells us.

With the Lavelle Road brewery being a learning every step of the way, the second outlet was easier to set up. From taking the property on lease to installing the micro brewery and kitchen, every step had been a learning. Being pioneers has its challenges, after all, but it gave them a chance to understand and navigate the market much better.

Two years after stabilising the brand in the heart of the CBD, the Whitefield outlet was launched, along with a restaurant- Mustard and Cress and a patisserie– Everything Stops For Tea.

Today,Raju is an experienced person for brewery laws, and willing to help any new entrants. “The complete list of licences is clear, the official licence is Rs.2.30 lakhs. One needs to pay Rs.17.5 per litre as taxes every year and at the beginning of the year, the Excise duty. For that the brewer needs to identify the sales planned and pay upfront. It’s smart to plan for average consumption and pay, then, if the consumption increases, the balance can be paid late,” Arvind advises. 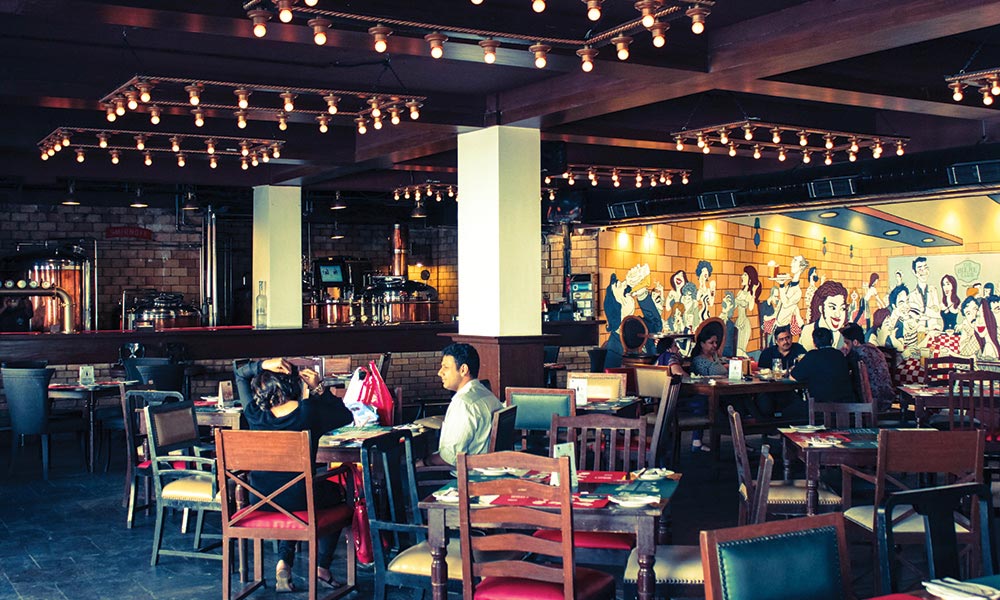 There are regular inspections, and data has to be maintained on the quantity manufactured, quantity sold, the pH levels and such information. But that’s all clear now. The company has a dedicated person who takes care of the constant regulatory requirements, leaving the brewers and Rajus free to focus on innovation, taste and how to keep the market loyal.

Competition?Raju shrugs it away,” There is space for everyone,” he smiles,”the Indian consumer has just started tasting craft beer. In other countries there are more than a thousand flavours of craft beer, and constantly increasing, India has about ten at the most, there is so much that can be done, and so much space for growth.”

As a new entrant in the craft beer appreciation, the Indian tastes are pretty mild, he says, and wheat beer is the highest selling. Bitter beers, that are enjoyed abroad, are yet to catch up in India. Brewers are people with a passion for tastes and flavours, and most experiment to get better and more innovative combinations. But that is a very small market in India. Its largely wheat beer and IPA (Indian Pale Ale).

The Biere club’s tagline is interesting- “Discover Better”. Having manufactured more than 400 flavours of beer over the last 5 years, innovation is high on the brew master Rohit’s list of priorities.  The craft beer varieties also have an interesting range from Ale, Lager, Stout, Wheat, Seasonal or Club special. Seasonal flavours rule and the Mango Beer is in high demand, as a favourite of the summers. In 2012, The Biere Club was the first microbrewery in the world to make Mango Beer!  Arvind mentions more new concepts-ragi beer for instance.

The base needs to be strong, flavours are a part of the creativity that rules craft beer. Robusta coffee beans also became a creative concept-coffee beer!

The Biere Club is established in Bangalore now, and the plans are only on how to climb up! The second outlet is up and prospering in Whitefield. Plans are about expanding to a third outlet then start bottling and retailing in Maharashtra where it is legally allowed. Craft beer is like music, in Rohit’sopinion, the acceptance is a matter of personal taste. But The Biere  club has provided for all tastes-from the regular beers to seasonal specialities like Orange Thyme Lager, Coconut Porter, Cucumber Coriander Lager, Smoked Pineapple Ale, Orangina Lager, and their  signature brew-The Mango Ale, to name some. The food at the Biere club complements the beers and the décor-easy on the senses, laid back for a relaxing experience and yet, distinctive. It’s been great going all the way for ArvindRaju and MeenakshiRaju – the trailblazers of the brewery revolution in India.

Having manufactured more than 400 flavours of beer over the last 5 years, innovation is high on the brew master Rohit’s list of priorities. The craft beer varieties also have an interesting range from Ale, Lager, Stout, Wheat, Seasonal or Club special.