The dazzling lure of pristine beaches by the Indian Ocean, exotic wildlife safaris and sprawling ancient edifices steeped in rich history is enough to keep wanderlusts from coming back to Sri Lanka for more. Fondly referred to as ‘The Pearl of The Indian Ocean’ and packing a whopping eight World Heritage Sites in such a small area, it’s hard to not fall in love with the many wonders this tiny island has to offer – and that includes its food culture. 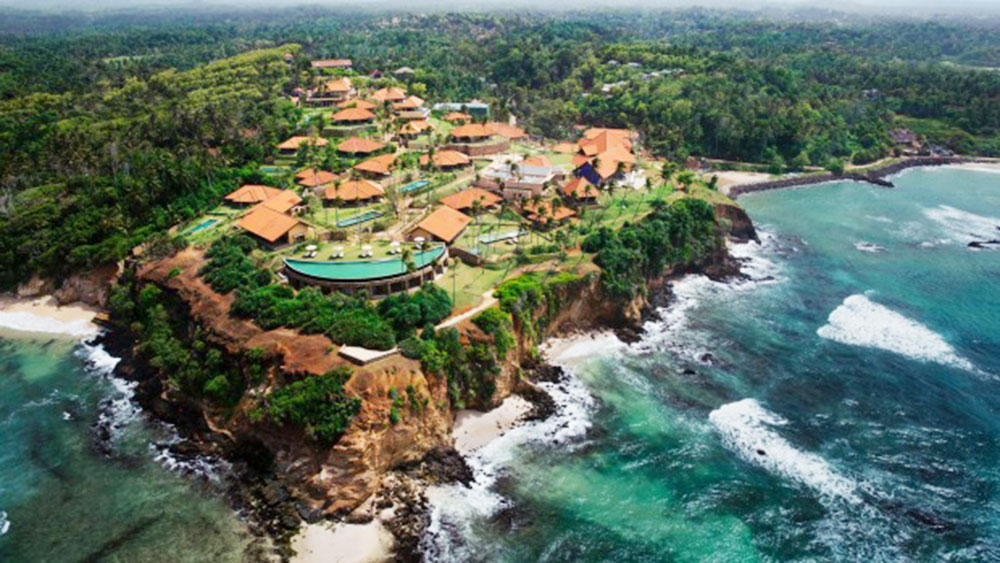 Arguably one of the best cuisines in South Asia, Sri Lanka’s food is not for the timid-hearted and stands out thanks to the use of the myriad spices that the island is so prized for. As such, the flavours tend to be all the more complex and nuanced. 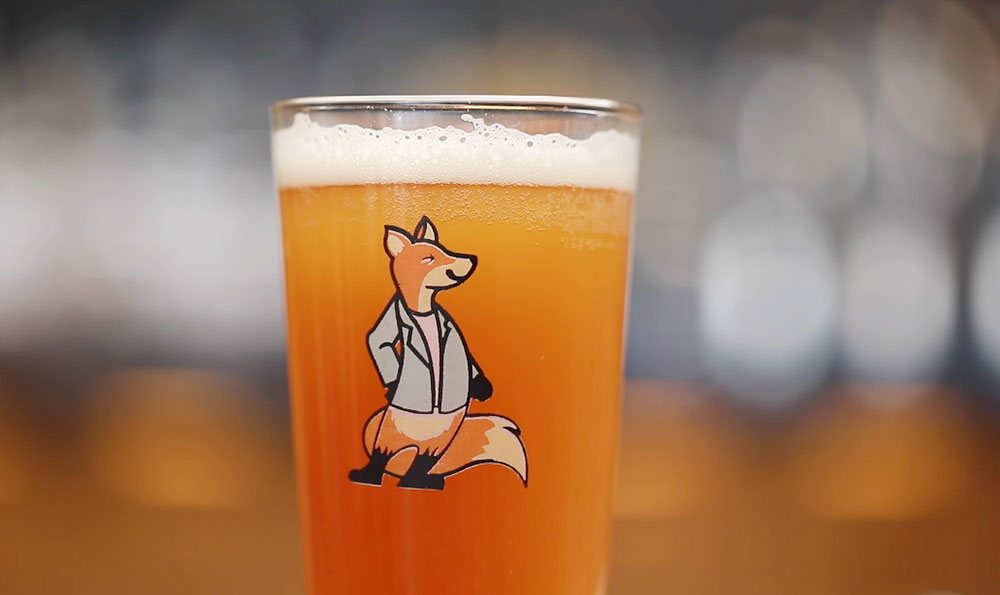 Fox In The Field, Whitefield, Bengaluru

Fox In The Field, a Whitefield-based microbrewery recently held a Sri Lankan Food Festival where the Brewer World team had a rare chance to interact with seasoned food writer and restaurant critic – Priya Bala. While Priya believes her career in food writing was a little bit of serendipity, this bon vivant has been interested in food and cooking since she was a child. “I come from a family where all the women are splendid cooks! I started baking when I was 7 or 8 years old. Fast forward to when I joined Times of India, and Bombay Times was launched: we were in between food critics and my editor, Bachi Karkaria, suggested I write the reviews. It was very daunting for me as a newbie in my early twenties to be entrusted with commenting on restaurants but I did that and went on to enjoy it!” Priya told us when asked about how her passion for food writing was born. 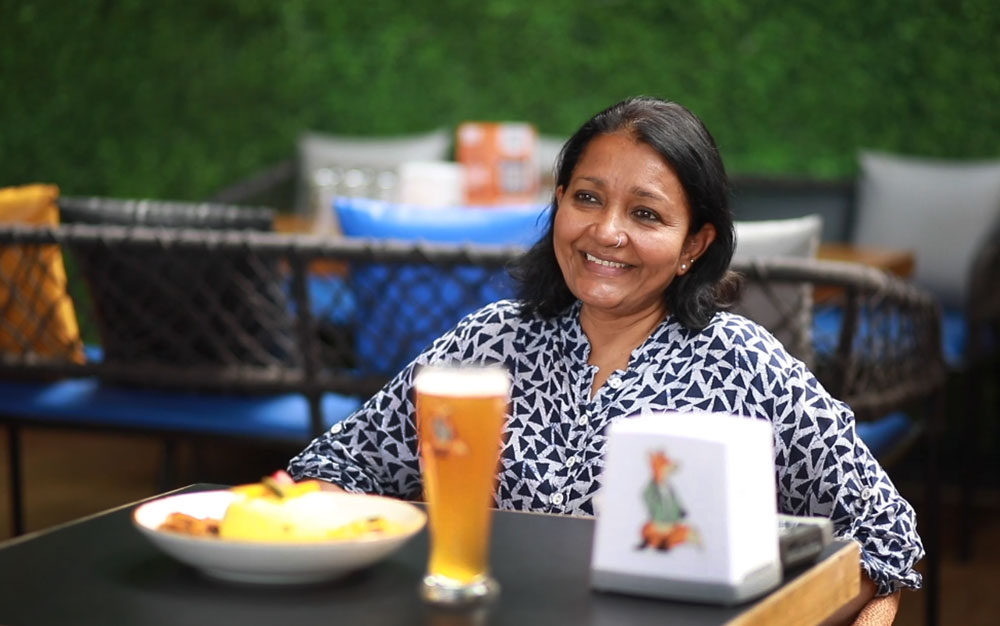 Priya Bala at the Sri Lankan Food Festival at Fox In The Field, Whitefield, Bengaluru

Today, Priya is hailed for her insightful anecdotes on regional cuisines. She has also edited several Food Guides for Bengaluru in addition to authoring a number of books such as Food Prints – A Trail of Food and Memories, Secret Sauce: Inspiring Stories of Great Indian Restaurants and Start Up Your Own Restaurant: The Definitive Guide for Anyone Who Dreams of Running Their Own Restaurant.

At Fox In The Field, we were greeted with a sumptuous spread of authentic Sri Lankan bar foods, exclusively curated by Priya Bala, which were also paired with beers that have been crafted under the guidance of Head Brewer, Mr. Roop. 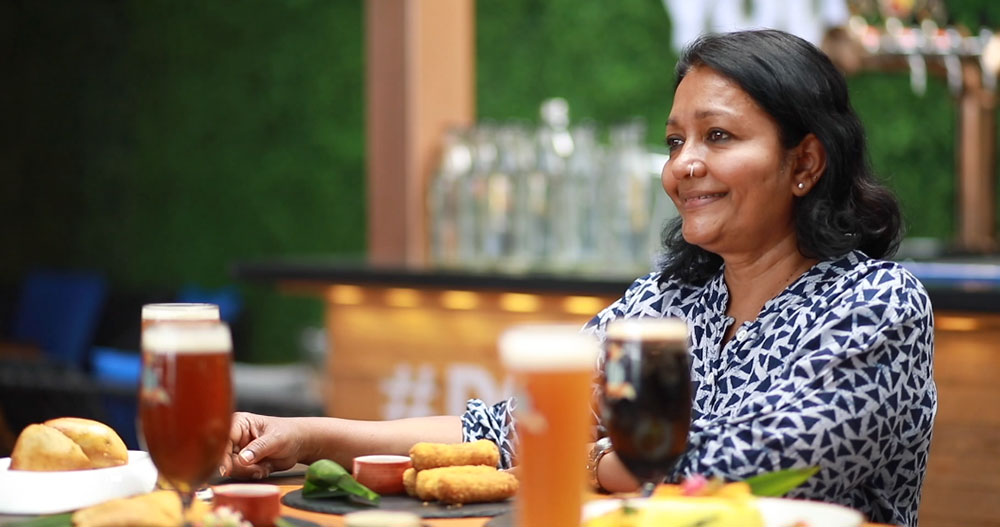 Priya Bala at the Sri Lankan Food Festival at Fox In The Field, Whitefield, Bengaluru

We couldn’t help but ask Priya the inevitable question that crops up in the mind of anyone who is new to Sri Lankan cuisine: Is it similar to the food we get in South India? “Well, yes and no,” she replied. “There are just some similarities with Kerala cuisine in the sense that there is a lot of coconut milk used and that it’s seafood-centred, which all coastal cuisines kind of have in common. But it is also very distinct in the use of the spices we use such as cinnamon. The indigenous veggies and greens are also very distinct and there’s also the use of lots of dry fish. We use a condiment called Maldive fish which is super dried tuna and could probably be like the balachung of South Asia. So yes, Sri Lankan food is certainly unique and when I think of home or Sri Lanka, there are certain flavours that stand out that sort of symbolise Sri Lankan food.” 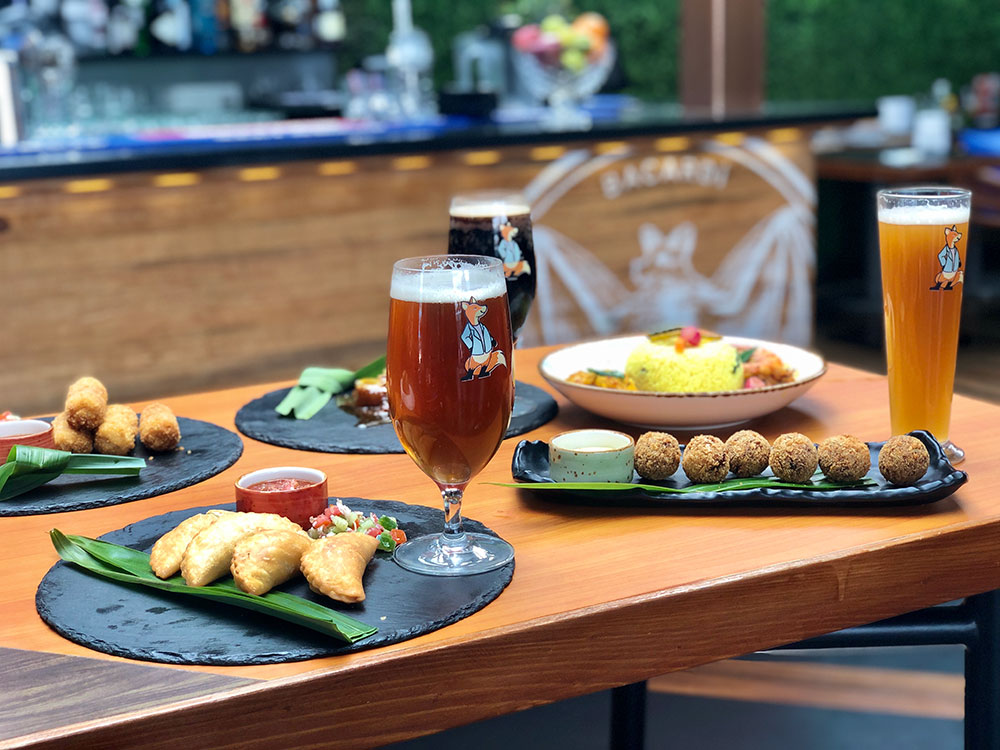 For the Sri Lankan Food Festival curation, Priya drew inspiration from a repertoire of what she likes to call Sri Lankan Short Eats. These can be anything between little snacks to something that can be served at a high tea to something that pairs really well with beer and arrack.

The entire fare was a collection of mouth-watering caramelised onion-infused savoury Seeni Sambol patties and crispy Chinese rolls filled with seasoned chicken, followed by Priya’s very own take on the Malu Pang and finally, some crumb-fried Fish Cutlets.

Being a fond beer drinker herself, Priya also offered us some great tips on pairing these short eats with beer styles that we all love!

Check out the full video below:

“The patties are a very popular snack in Sri Lanka and we’ve decided to pair it with Fox In The Field’s Lager,” explained Priya. “The Chinese Roll is honestly one of my favourites and so is the Hefeweizen. The Chinese Roll is also crumb-fried; you can never go wrong with crumb-fried,” she added. “So I’m just pairing two of my favourites together here.” 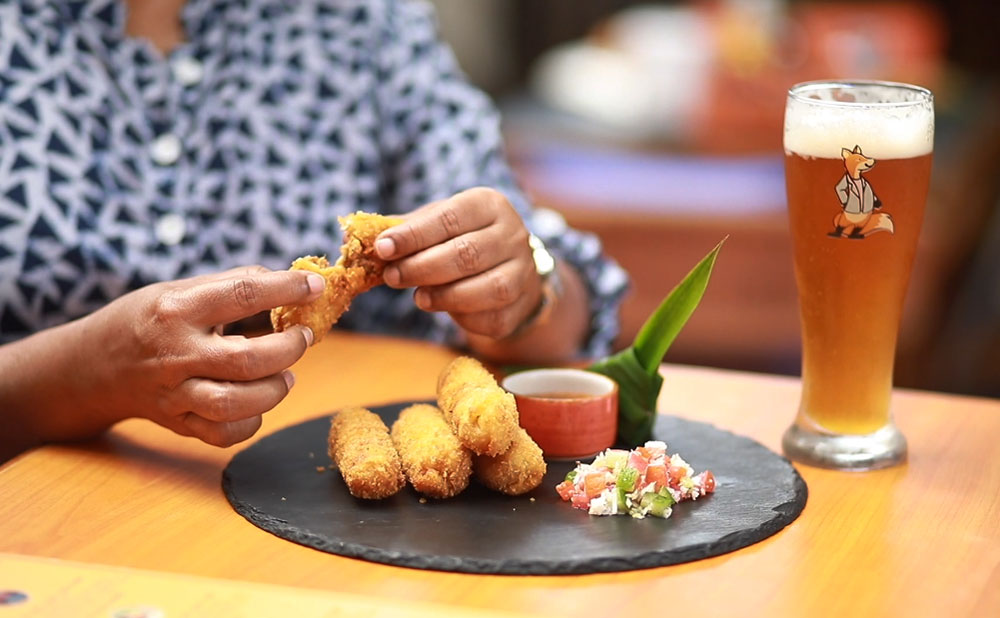 Crispy Chinese Rolls stuffed with seasoned chicken and wrapped in pancakes, paired with the refreshing Hefeweizen

“The Malu Pang, which also means ‘fish bread’ in Sinhala is also a very popular snack that’s mostly filled with fish,” she continued. “This is my reinterpretation; I’ve put some slightly sweet pork into it and we decided this would go well with the Tripel IPA.” 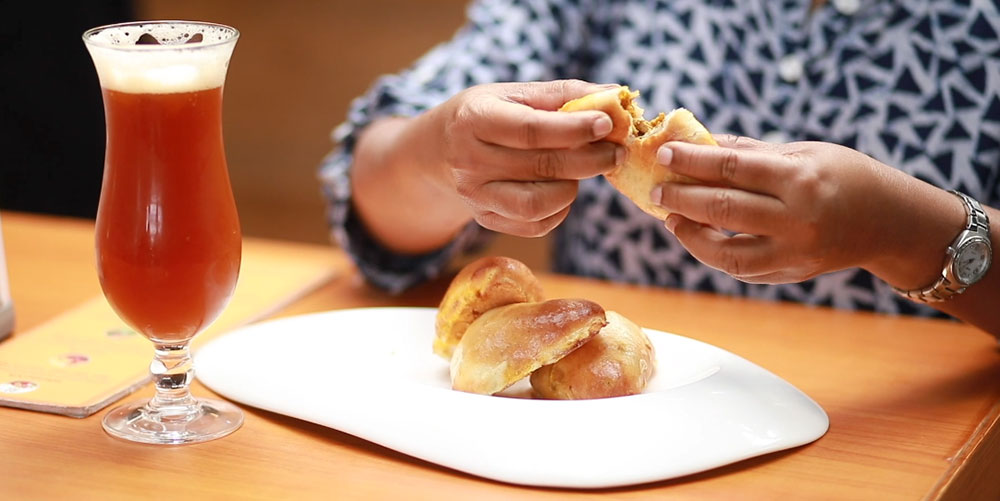 “The fish cutlet is an absolute favourite of mine,” revealed Priya as she moved onto her fourth pairing. “In Sri Lanka this is made with canned fish for some reason, but here we are using fresh fish. It’s very mildly spiced with a hint of green chilli and pepper and is again, crumb-fried, obviously! This one’s served with a side of some very interesting mustard mayonnaise and we thought it would go really well with the Saison Farmhouse. I think this pairing works really well because this is just something you can keep popping into your mouth and the beer washes it down really beautifully.” 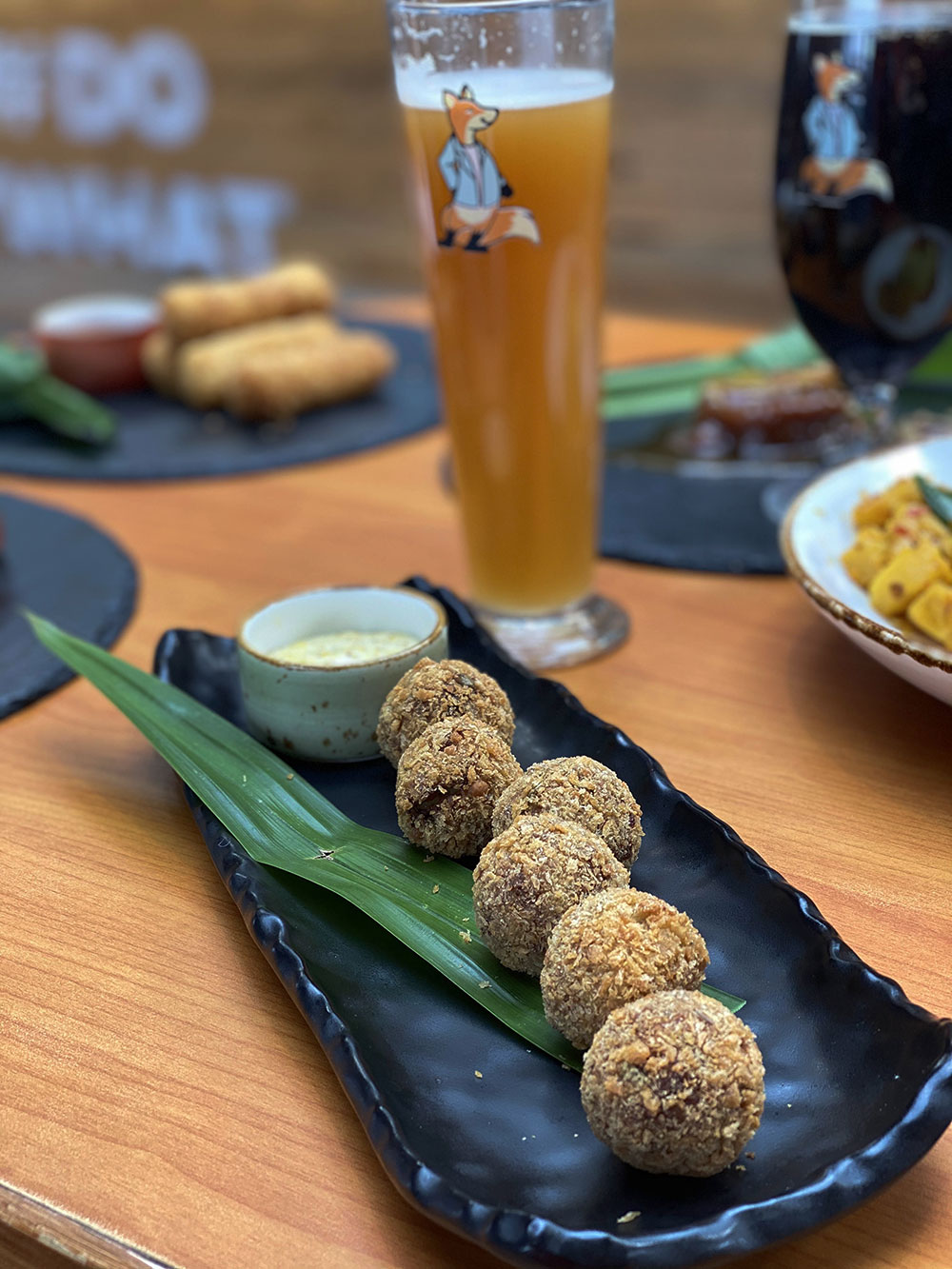 For those who are visiting Fox In The Field and want to drink through till dessert, Priya has the perfect pairing for that too! For her fifth and final pairing, Priya introduces us to the Watalappam, which is Sri Lanka’s most popular, most common, ubiquitous dessert. “It’s made with some of the ingredients the island is most well-known for like coconut and palm jaggery and is also scented with cardamom and nutmeg. This one, is being paired with the Chocolate Stout.” 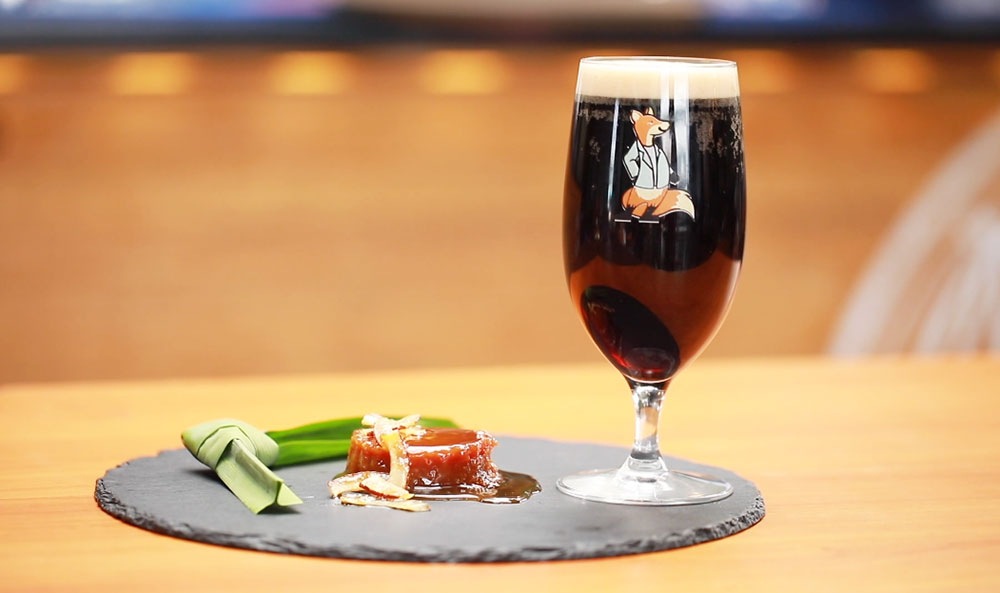 Finishing on a sweet note: the sticky, sweet wattalappam paired with the Chocolate Stout

“What is it about beer and food that makes people want to come together to share as an experience?” we asked Priya.

“More than wanting to come together, I think eating and drinking together is one of the most communal things we can do for sheer pleasure and joy and I really believe in that,” Priya said. “Especially during the lockdown when all of us were so isolated and missed human contact – the thing I certainly missed the most was beer and conversations with friends.”

Of course, this is just a gist of our experience with Priya at Fox In The Field. To get a closer look, check out our video and tell us which pairing appeals to you the most and why!