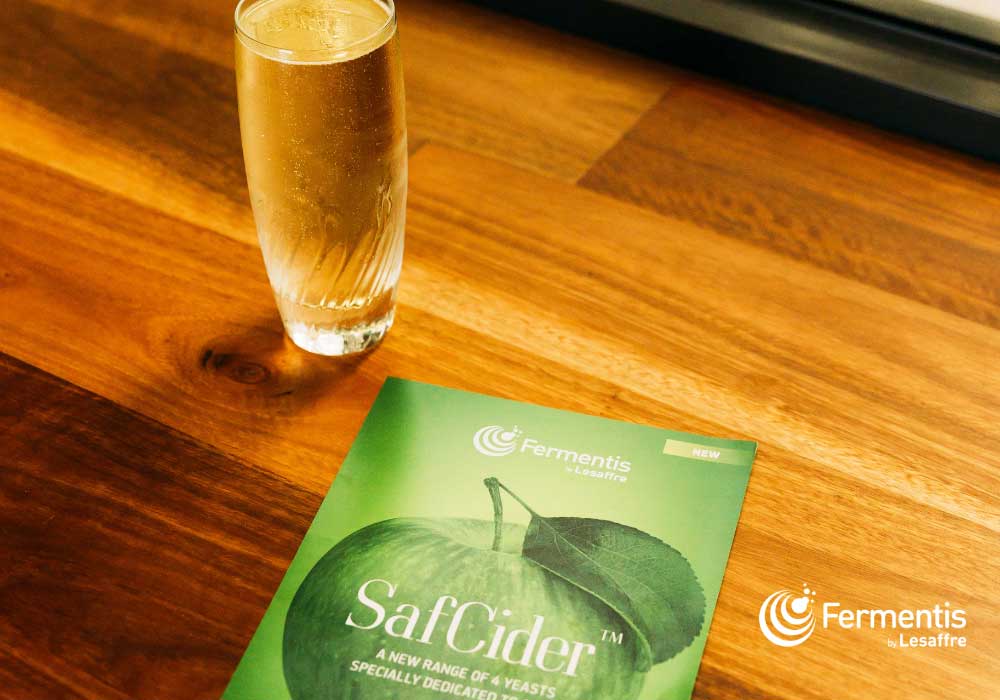 Although the global cider market has been constantly growing over the past 15 years, the growth rate has progressively slowed down in the last 5 years. In fact, we see from the last data published (AICV) that the significant increase of consumption observed between 2005 and 2015, from 13.5 million hectoliters (MhL) to 24 MhLs, mainly driven by new regions such as North America, Australasia and Africa versus older markets such as West Europe and Latin America, progressively flattened out to reach about 26 MhLs in 2019.  In addition, the distribution between regions has not been changing much in recent years… In this context, cidermakers are facing competition challenges and need to find new ways to boost their market by standing apart from each other. Among the main diversification tools they have in hands, the choice of the raw materials and the recipe; but also the selection of the yeast strain and the conditions applied to carry out the fermentation can drastically affect cider organoleptic profiles. In this way, Fermentis R&D selected 4 new yeast strains dedicated to ciders whose characterization will be presented in this article.

Evaluation of different yeast strains through different types of cidermaking

What could be considered as a “cider” is actually very variable depending on the countries and the substrates: 100% apples, types of apples, addition of other fruits such as pears, usage of juice, concentrates or external sugars,…In addition, the number of recipes can hugely differ, what makes a standard study almost impossible.

As a consequence, the characterization was based on 4 major recipes that could embrace the main problematics faced by cidermakers around the world: types of apples used, source and quantity of sugars, completion or voluntary stop of fermentation (to eventually leave some residual sugars) and fermentation temperature.

The different recipes are detailed in Table 1.

All fermentations have been carried out at the experimental cellar of the Institut Français des Productions Cidricoles (IFPC), French research institute specialized in cidermaking; in 15L glass vessels, with a standardized oxygen rate addition (1.5mg/L) and under inert atmosphere (N2).

It is easily understandable that, from the traditional French sweet cider to the American hard dry cider, most of the fermentation conditions are becoming increasingly difficult even though higher pitching rate, nutrition and temperature were adjusted. It was then interesting to try different yeast strains through all these recipes in order to select the most diverse and interesting ones. From more than 20 strains evaluated, we’ll highlight the main results  for 4 of them (SafCider™ AB-1, SafCider™ TF-6, SafCider™ AS-2 and SafCider™ AC-4) , more specifically as it relates to their robustness; and their analytical and aromatic profiles.

To assess the robustness of the strains towards difficult fermentation conditions, i.e. high sugar concentration (and content in the most difficult to assimilate fermentable sugars, i.e. fructose), low pH, nutrient deficiency, low temperature… Figure 1 shows the kinetics as well as the remaining sugars at the end of the fermentation in the hard cider.

The strain SafCider™ TF-6 clearly stands apart from the other strains as it was not able to finish the fermentation and typically left ~25 g/L of sugars, among which fructose was a major part. This feature was observed in most of all matrices, as TF-6 was only able to finish the fermentation till dryness in the English cider (high YAN, low tannicity, then less inhibition and more O2 availability, high pitching rate and temperature), highlighting the bigger needs of this particular strain and the fact that the selection can be crucial depending on the cidermaker target. A higher sensitivity to high concentration of SO2 (50 mg/L maximum) is as well to be noticed for this strain. 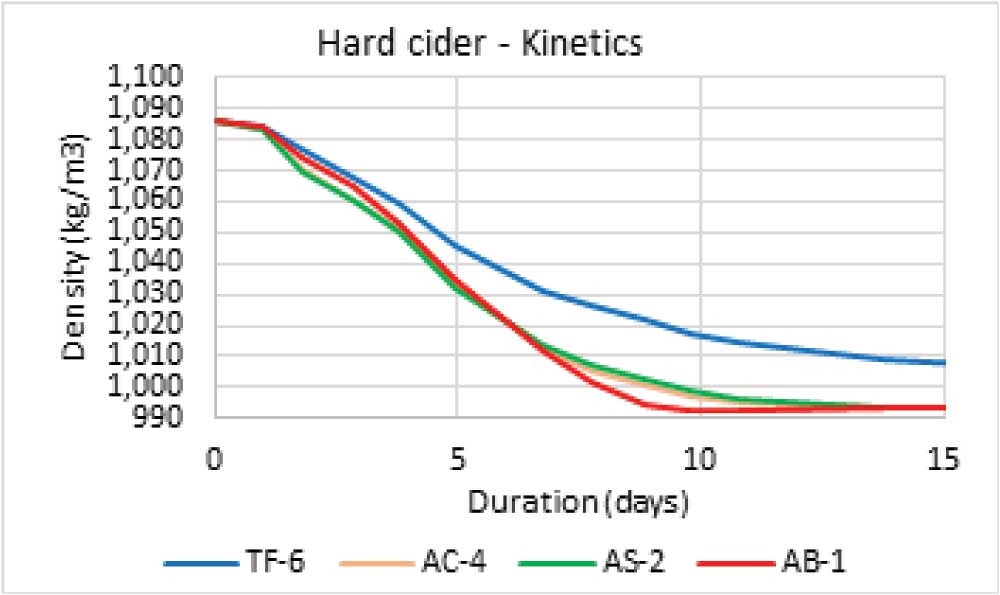 All basic analytical parameters at the end of the fermentation have been determined. Among the most interesting ones, the acidity profile is of particular interest as it reflects the metabolic behavior of the strain that could have a real impact on the organoleptic profile. Figure 2 shows the acidity profiles of strains in the English cider recipe. Most significant with SafCider™ AB-1 and maybe not as much with the other strains, we could see that some strains are able to consume the major organic acid present in apples, i.e. the malic acid, in significant amount through the malo-ethanolic pathway; and thus decreasing the total acidity and its feeling. On the contrary, some strains, such as SafCider™ AC-4, are preserving this acidity and maintain a crispy feeling (observed but not shown here). Moreover, the ability of strains to produce acetic acid during fermentation from the glycolysis pathway can also affect the aromatic profile, degrading its quality at too high a concentration (vinegar flavors). For this attribute, all strains were selected for their low production with always the SafCider™ TF-6 being a “clean” strain towards deviations like SO2 and acetaldehyde production as well. 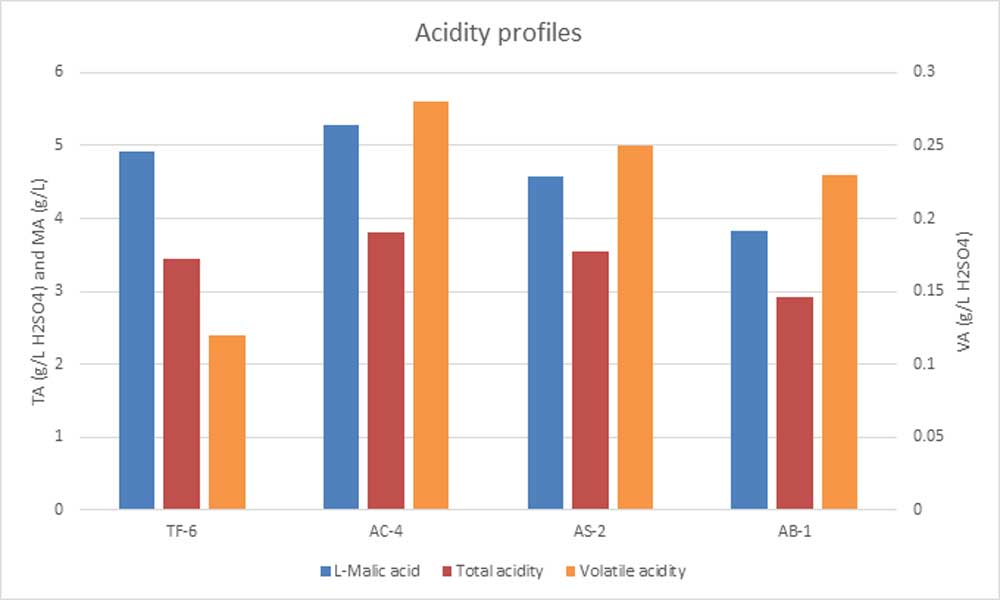 In addition to higher alcohols, two major types of aromatic compounds are produced by yeast strains during fermentation and have a significant impact on the aromatic profile of all beverages: (1) the acetate esters, whose most famous and abundant one is the isoamyl acetate with its distinctive banana and candy notes and which is recognized as an overall aroma enhancer; and (2) the ethyl esters, whose most abundant ones are the linear chain ethyl esters from 4 to 10 carbons (C4- butanoate, C6-hexanoate, C8-octanoate and C-10-decanoate) and which confer more discrete but more complex floral and fruity characters. Huge differences in the release of these compounds can drastically affect the flavor perceptions of beverages, the same applying for ciders. In Figure 3, all matrices have been taken to compare the aromatic behavior of the strains in different conditions.

We noticed big differences between strains; and even if aromatic compound concentrations were of course impacted by the recipe and more specifically the number of sugars fermented (especially for isoamyl acetate whose acetate part is directly linked to the glycolysis pathway), we could extract common trends. Except for the English cider, SafCider™ TF-6 showed always higher production of isoamyl acetate than others. This will be illustrated in terms of flavor but also aromatic intensity in the last paragraph of this article. For the English cider only, SafCider™ TF-6 was indeed able to dry the sugars and not leave any residual sugars, suggesting a strong relationship between the stress generated at the end of the fermentation and the aroma produced. SafCider™ AC-4 showed particularly high but quite stable ethyl esters production (driven by ethyl octanoate – fruity/floral), hypothesizing a reliable complexity in the flavors. SafCider™ AB-1 and particularly SafCider™ AS-2 increased their ester production along with the difficulty of the recipe with SafCider™ AB-1 being on the low values, more respecting the raw material. 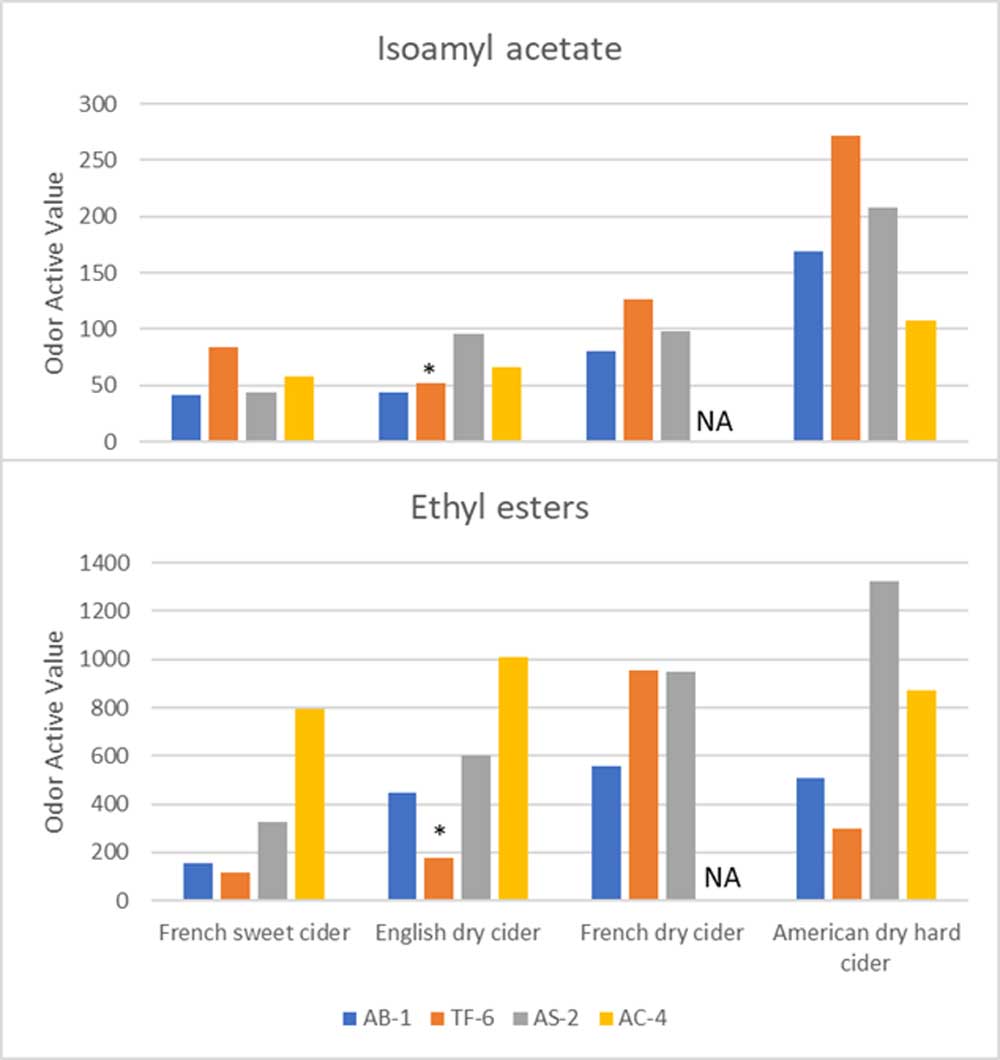 Relying on the expertise of IFPC and their trained taste panel specialized on French traditional sweet ciders, professional tastings have been carried out on French cider experiments, both stopped with around ~30 g/L of residual sugars (called “Brut” ciders in French). The specificity of this tasting was to assess first the global fruitiness of the ciders with two major descriptors: (1) “Fruity/Floral” corresponding to fresh fruit (apple, pear, banana…) feeling; and (2) “Cooked fruits” related to ripe or processed fruits (like compote), aromas that are not necessarily looked for but adding complexity to the final cider. After this evaluation, it was then asked to tasters to detail fresh and cooked fruit notes to identify the aromatic drivers for each strain and to evaluate off-flavors as well, such as phenolic and sulfury aromas. Finally, a simple evaluation of the basic  tastes was done: Sweet, acid, bitter and astringent

From these tastings, SafCider™ TF-6 (especially) and SafCider™ AS-2 were scored as the highest in fresh but also cooked fruits, whereas SafCider™ AC-4 was judged less expressive and predominantly oriented towards freshness; and SafCider™ AB-1 was more discrete (data not shown).

More interesting were the detailed fresh fruits perceived by tasters as shown in Figure 4.  Obviously, sensory characterization of all ciders was driven by detection of apple notes, but SafCider™ TF-6 scored high for most of the fruits, especially banana-pear and red fruits. SafCider™ AS-2 and SafCider™ AC-4 respectively exhibited more citrus and floral notes, whereas SafCider™ AB-1 was mainly centered on apple. 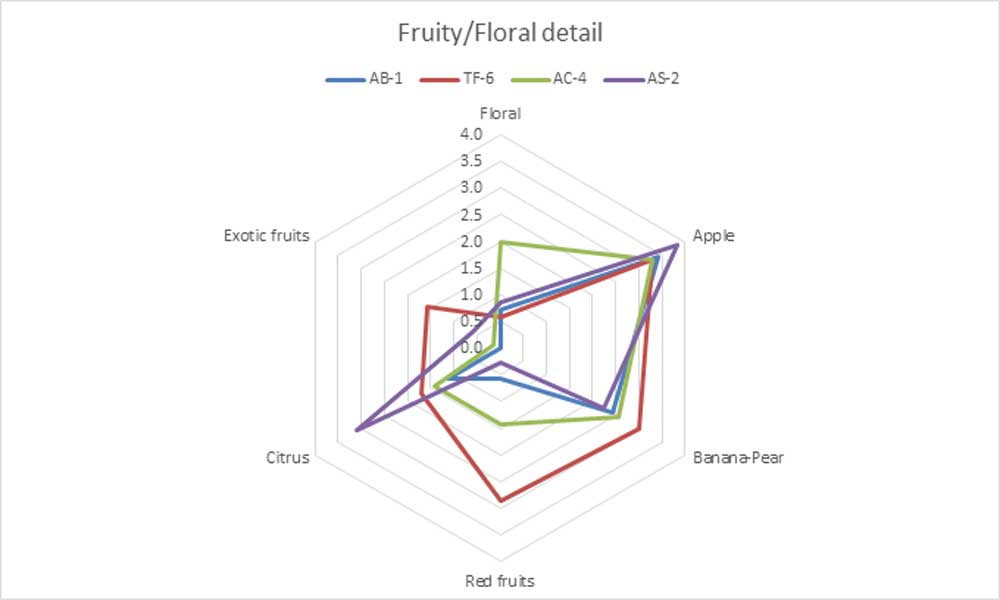 Fig.4 Detail of fruity/floral notes for the French sweet cider.

Both these general and detailed notes are actually quite well related with the production of aromatic compounds highlighted in the previous paragraph; with higher production of isoamyl acetate by SafCider™ TF-6, offering thus more aromatic intensity but enhanced aromatic complexity towards the other fruits as well; followed by SafCider™ AS-2 and SafCider™ AC-4, the latter producing mainly ethyl esters such as ethyl octanoate;  which could explain these red fruits and specifically floral notes. SafCider™ AB-1 was the less exuberant and expressing more the raw material thanks to its quite discrete aroma production.

Together with mouthfeel attributes assessment (data not shown) confirming higher acidity feeling for SafCider™ AC-4 in line with its acidity maintenance and the sweetness feelings for SafCider™ TF-6 and SafCider™ AS-2 possibly linked to their high candy-like aromatic intensity and their higher remaining fructose level (higher sweetening power than glucose or saccharose), Fermentis suggested the map in Figure 5 to describe the impact of these 4 yeast strains and to serve as a baseline for cidermakers in their choices. 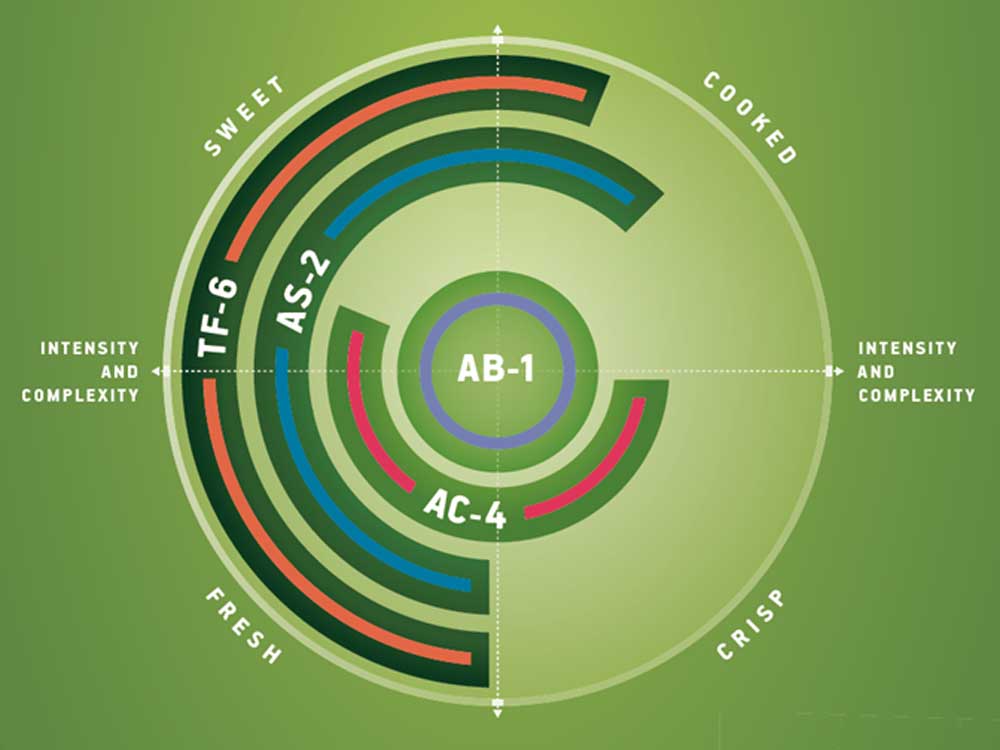 Yeast strains may have a huge impact on cider profiles, not only in terms of fermentation performances and analytics but for sure also from a sensory perception standpoint. As such, they can be considered as a powerful tool to diversify the cider offer in the market and cidermakers can play with them to achieve their final product target. For this purpose, Fermentis focused its research on the selection of valuable strains dedicated for ciders. SafCider™ AB-1 (Apple Balanced) will suit for all types of balanced ciders even under difficult fermentation conditions. SafCider™ AS-2 (Apple Sweet) will bring to sweet and dry ciders complex aromatic profile between fresh and cooked fruits and a rounder mouthfeel. SafCider™ AC-4 (Apple Crisp) will be applied for highly fresh and crisp sweet or dry ciders. SafCider™ TF-6 (Tutti Fruiti) will be dedicated to intensely fruity but rather sweet and round ciders!