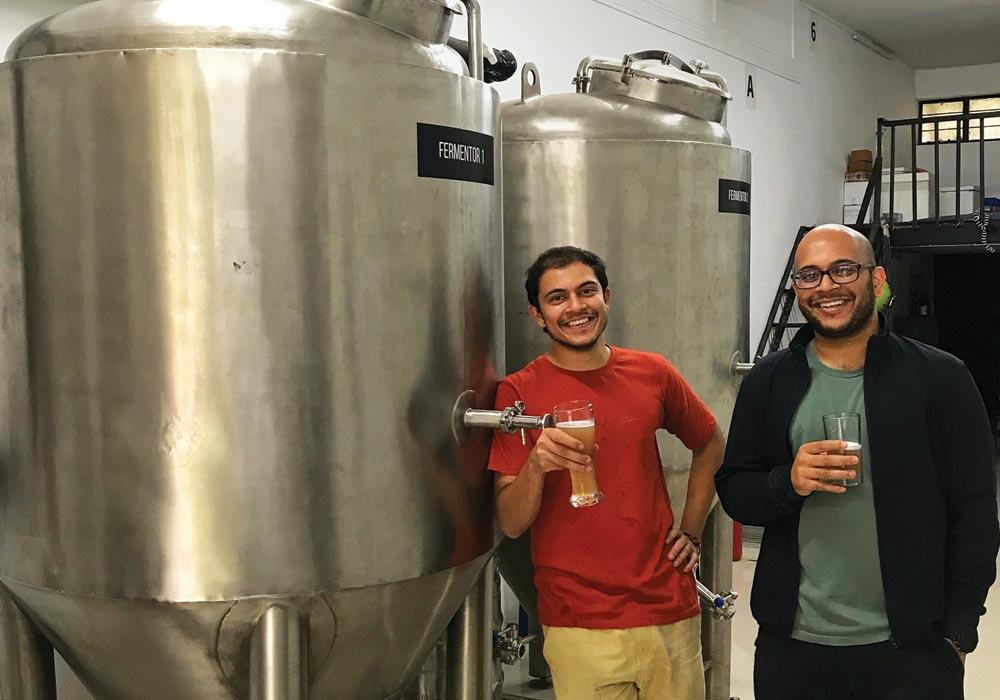 With India becoming a melting pot of beer, in terms of flavour, aromas, ingredients, craft, draught, or bottled comes another venture set up in Pune – Yavasura. Yavasura means a barley-based alcohol (beer) in Sanskrit and their logo is a Y, which also represents a beer glass. Driven by their love of beer, brother’s Ameya & Partha Mehendale started Yavasura purely as a passion project. Partha Mehendale in conversation with Divyesh Patil & Sonika Choudhury.

How did you start brewing? What’s your story?

Yavasura’s brewing story began in Boston, where Ameya was studying as an engineering graduate. During that period, he was introduced to the vast world of craft beers. Soon, it became an obsession and he and a few other graduates started homebrewing in Boston. Weekends became busy after that- brewing, bottling and of course, drinking homebrewed beer!

In the year 2013, Ameya returned back to India. Around the same time, I had just gotten done with my engineering. We still reminisce the day sitting on the couch by the window overlooking a neem tree, sipping tea on a gray monsoon day when Yavasura was born. We decided to try our hand at small batch brewing first. We began brewing, many-a-times waking up at 3 in the morning to brew before heading out to work at 9. The initial struggle was real-from sourcing ingredients to downright using alternates (we malted our own grains, used baker’s yeast and medicinal hops powder). It was a good learning curve! The passion for great beer kept us going, and we pushed on!

Why did you get in this industry? And in particular why did you open a production brewery?

Honestly, it is for the love of beer. Yavasura is a complete passion project. As we gradually became familiar with the craft, we were in no doubts that this is what we wanted to do. We had decided early on to take slow and thoughtful steps. We both come from an engineering background, with no experience of running a brewery nor a restaurant. Instead of dealing with two unknowns-we thought of starting just a production brewery and then expanding to have our own taproom later on.

The idea was conceived almost naturally. We kept getting better and better at personal brewing, and finally in 2015, we applied for the excise license. The process was time-consuming to say the least, but what we took back home from the long wait was patience and resilience. We held on to our day jobs till 2018, and any free time was used to either refine recipes for different beers or understanding the nitty-gritties of running a business. We finally got our license after almost 3 years. We served our beers for the first time in September at a fest, and the response we received was overwhelming. We’re truly grateful for the support we received!

What was your experience before getting in this industry?

We knew from the beginning that we had a long way ahead of us. We started gathering as much information as possible. We read books, we visited other breweries, we went to Europe to know more about beers and techniques, we gleaned information off the internet and so on. During all this, we were personal brewing continuously on the side and honing our skills. Eventually, we fell in love with the process of making beer, as much as beer itself. Over time, we divided responsibilities with Ameya handling the business aspect and I started handling the brewing operations. In 2016, I got the opportunity to intern for 2 months in a craft brewery in Colorado. This was just the kind of hands-on experience I wanted, and I made the most of my time over there.

How do you differentiate yourself from other breweries?

Craft beer is still a niche product. In such a huge market, a product like this will be a differentiator in itself. We are still a small business, started out as a result of passion and love for good beers. We are a local, homegrown brand. We do not like to follow the status quo. Our journey is that of turning passion into profession. We like to do things a little differently and we believe that reflects in the beers that we brew.

What is your brand’s ideology?

We believe that a lot of memories are created around beer or drinking in general. Such moments are always cherished-be it your first beer, or a celebratory moment in one’s life. We want to play our part by offering good beer to help craft these memories.

Secondly, we want to help people understand beer better. It is too overwhelming a world for craft beers- with the variety of styles to the jargon used. We want to build a community while demystifying craft beer and making it more accessible.

How do you come up with new brews?

Inspiration for flavour and aroma are always right in front of you; you just need to be looking at it right. Ameya and I, spend a lot of time on our terrace garden, growing and tending to plants. We spend a lot of time obsessing over the taste and fragrance of our produce, tweaking the process to get just the right result. This has reflected a lot in our beers-the Basil Peppercorn is a direct inspiration of this. We used three different kinds of homegrown basil and paired it with a balancing black peppercorn to get the perfect balance. Similarly, we spent almost two years designing and tweaking our traditional Belgian Witbier recipe till it matched our expectations. All of this is possible due to a small pilot system that we have.

What according to you is the most crucial process in the production of beer?

What do you think is the future of this industry? What according to you is the next big thing happening in craft beer industry in India?

One can say that the journey of craft beer in India has only just begun. The craft beer community is close-knit. A few changes that we would like to see for the industry are ease of getting the license, changes in the tax structure, access to other markets, etc. The community as a whole is pushing for these and a few other changes. The future looks really promising!

Who do you think is the consumer of craft beer in India?

Beer, especially craft beer, is a very democratic drink-anyone can enjoy it, without it being prohibitively expensive or inaccessible. There is such a large variety of craft beers that can be made here in India that one can easily find their preferred style. We, as Indians, have only been exposed to standardised and limited styles of beer. With the dawn of craft beers, people now have access to a lot of different flavour and styles. I firmly believe that once a person tries craft beer, it is difficult for them to not come back to it.

Where do you see your brand in 10 years?

There are a few milestones that we’ve set for ourselves. The plans include having one or more Yavasura taprooms, entering the retail market, having a national presence, etc. We want our brand to grow organically.