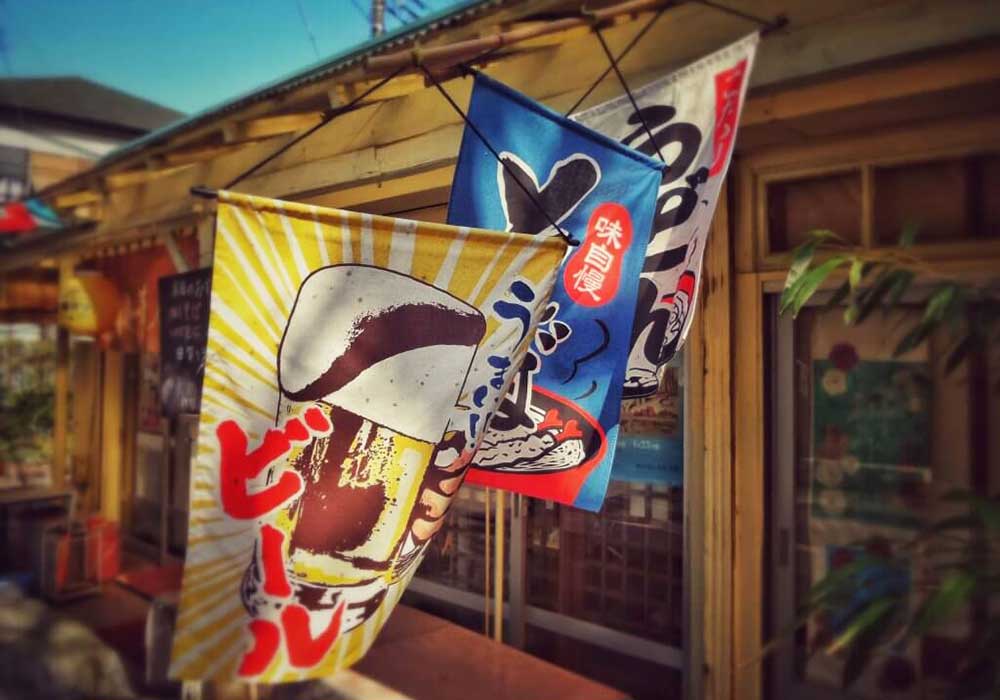 “A civilization stands or falls by the degree to which drink has entered the lives of its people, and from that point of view Japan must rank very high among the civilizations of the world.”

Kenichi Yoshida — “Japan is a Circle”

The Japanese view their drinking very seriously. To them, having a drink is a unique opportunity to explore relationships beyond their formal boundaries – especially when it comes to work colleagues. 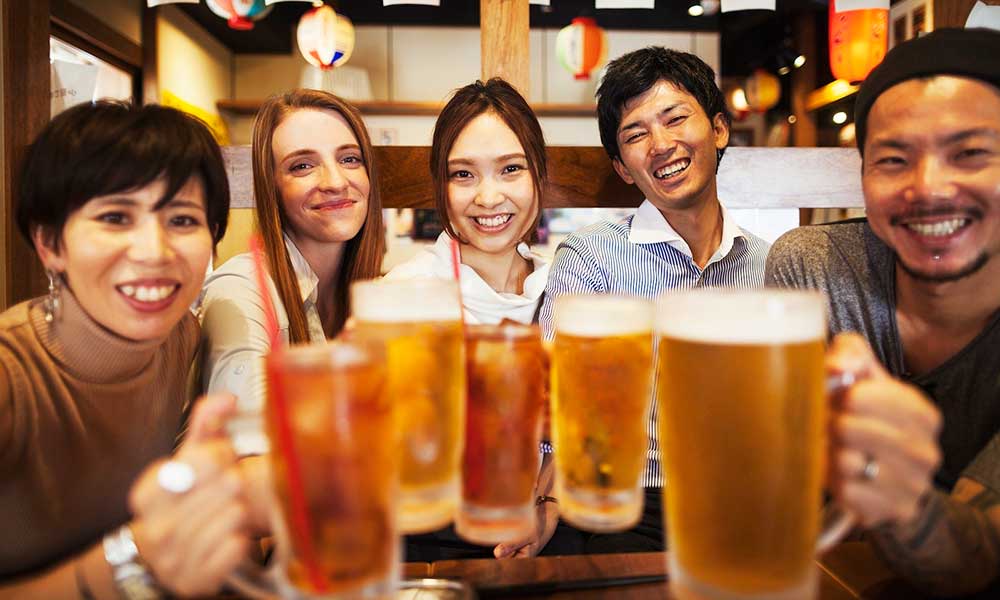 Though not a hard and fast rule, one will often find that most Japanese, when they go out drinking, start off with beer for the first round. A real drinking party in Japan never starts until everyone clinks their glasses together to raise a toast – known as kanpai (‘cheers’ in Japanese, also sometimes transliterated as kampai). There is of course, also that added sense of unity knowing that everyone starts with the same choice of drink. That’s not to say that the people involved in the merrymaking won’t branch out to other liquors during subsequent rounds but because beer is a simple drink to prepare from just four basic ingredients, it became the de facto choice of first beverage at any Japanese drinking feast. 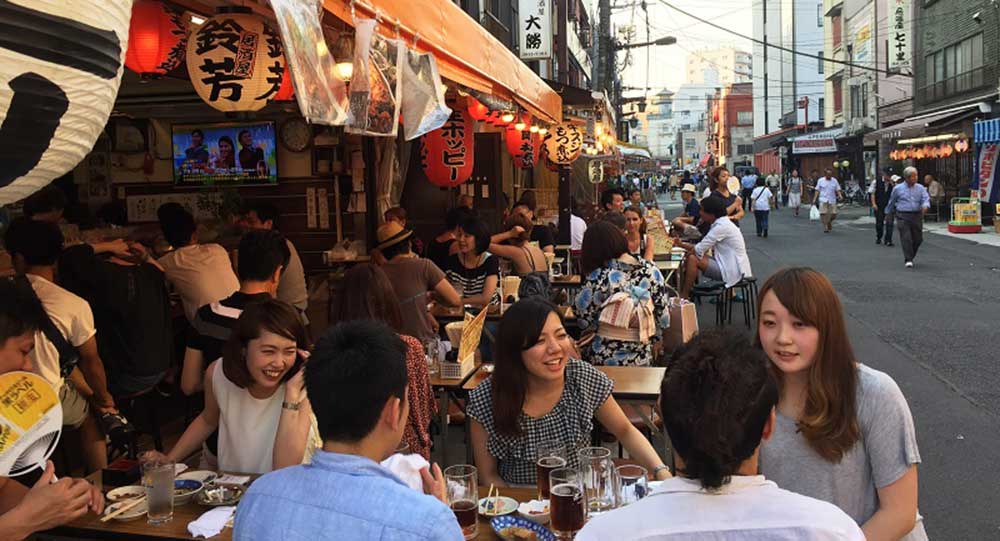 Japan’s love affair with fermented beverages goes a long way. While saké (fermented rice beverage) and shochu (Japanese clear liquor) have enjoyed a long history, the procedures of beer brewing and selling only began in the last centuries. But despite a relatively short history in Japan, beer is today, the top seller in the domestic market of this archipelago. Along with liquor, it is beer that makes up for around half of the country’s alcoholic sales, dethroning saké and shochu to a secondary position.

Arrival of Beer in Japan 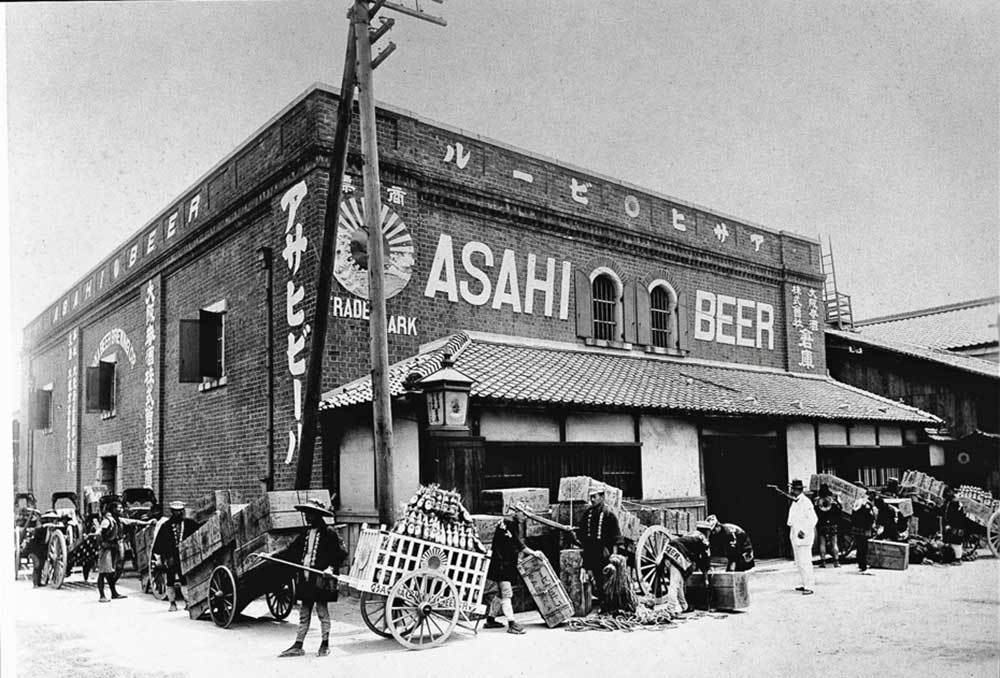 A historic image of The Osaka Beer Brewing Company in Japan. Photo: Asahi 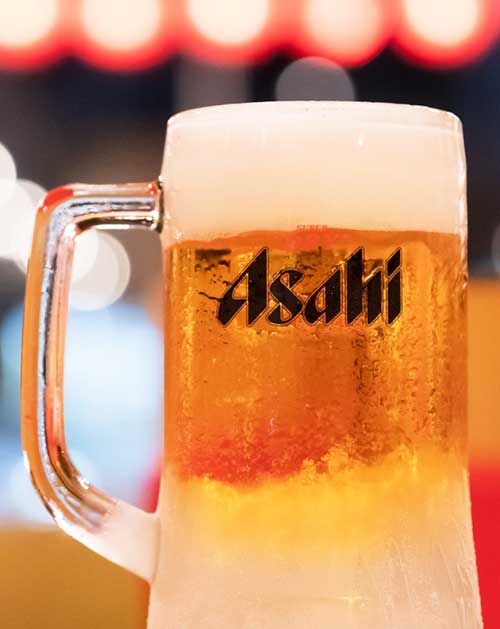 It is said that beer arrived in Japan several hundreds of years ago thanks to the Dutch traders who set up a ‘beer hall’ in Nagasaki for sailors during the Edo period (17th century). But it was only until the latter half of the 1800s when the establishment of breweries became common. A Norwegian-American by the name of William Copeland established Spring Valley Brewery in Yokohama in 1869, a private company that would eventually go on to becoming Kirin Brewery Company – one of the cornerstones of the Japanese beer market. Around the same time, a brewery in Sapporo opened up, establishing Sapporo Beer in 1876. That is why, until today, there is still a debate as to whether the birthplace of Japanese beer was Yokohama or Sapporo. 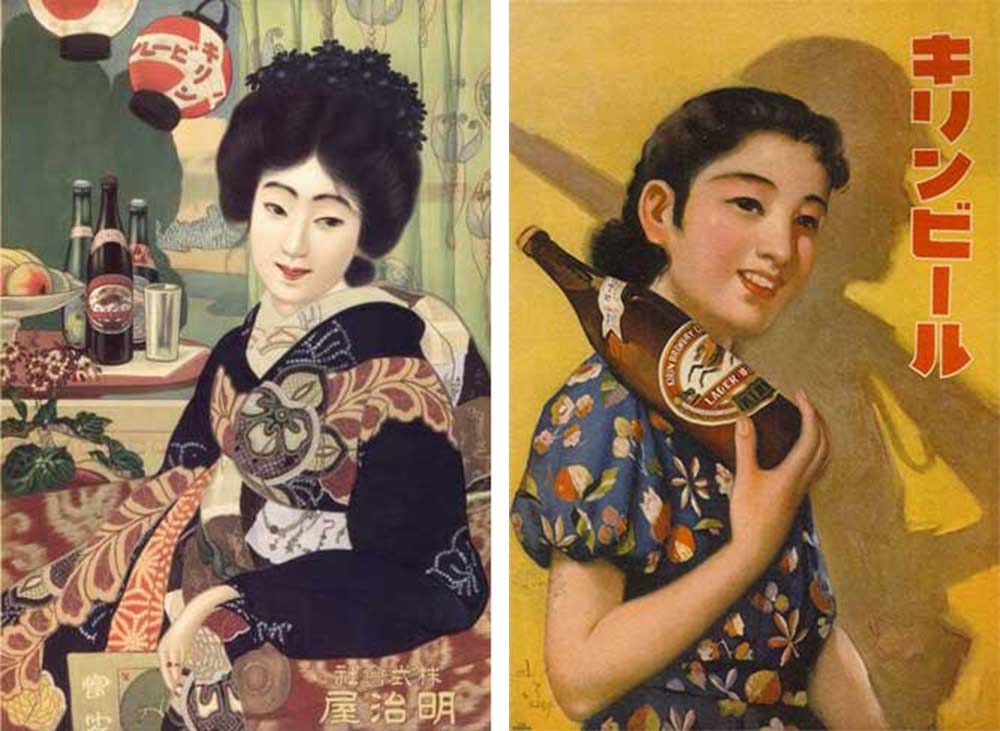 One of the curiosities that are so unique to Japanese beer is the three different ‘species’ of beer.

A market that was once dominated by large players like ‘Big Beer’ brands like Asai, Kirin, Suntory and Sapporo – Japan’s beer choices were primarily limited to commercially produced light lagers. Regular beers like Asahi Super Dry and Sapporo Premium, contain normal malt content and are taxed domestically at the highest rate. The alcohol content of these beers is typically around 5 per cent.

But beer producers in Japan have played it very smart. Due to an archaic taxation system that only measures malt content, not alcohol – Japanese brewers have devised a category of much more inexpensive ‘beer-type’ beverages that are not legally classified as a beer, but nonetheless, circumvent this excise. These are Happoushu (low-malt beer) and Daisan no bīru (third beer) or Shin-janru (new genre) – also popularly known as ‘sort-of-beers’.

Happoshu which translates to ‘sparkling alcohol’, is a recent recipe which has far less malt content as compared to Asahi and as such, is lighter in taste and cheaper on the pockets. Daisan no bīru on the other hand, is the so-called ‘new genre beer’ known for its innovative brewing. It is completely malt-free and the recipe uses pea, soy or wheat instead, earning it the title of ‘diet’ or ‘draft’ beer. 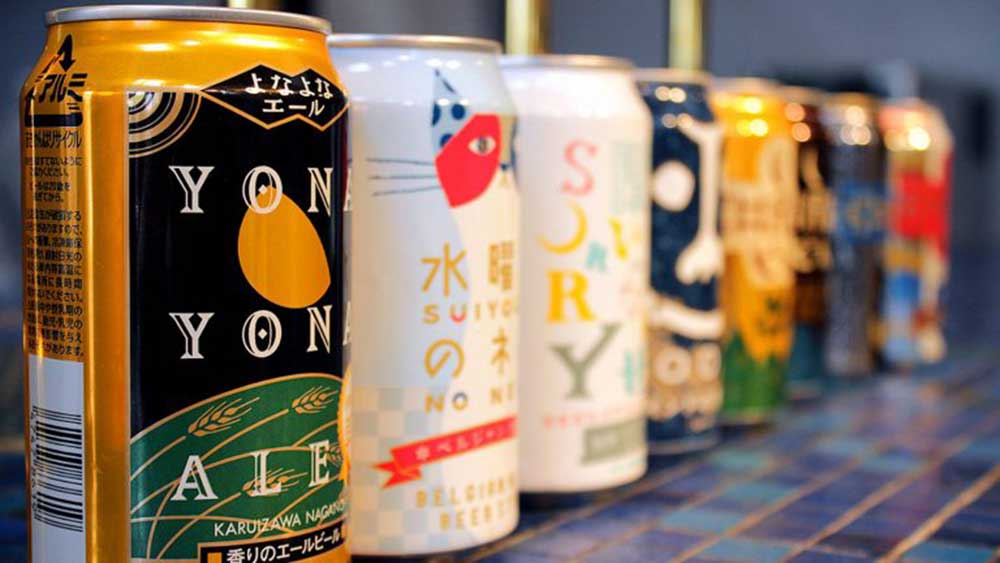 The price of a 350 ml can of regular beer in Japan is priced somewhere around 220 Yen on average. In comparison, the price of a can of Daisan no bīru or Happoushu is between 110 Yen and 160 Yen. Get the difference?

Of course, you can’t expect a Daisan no bīru or a Happoshuto match the taste of regular Japanese beer. However, if you ever find yourself in the middle of a hot summer under the Tokyo sun, chances are you’ll embrace the difference in taste most welcomingly! 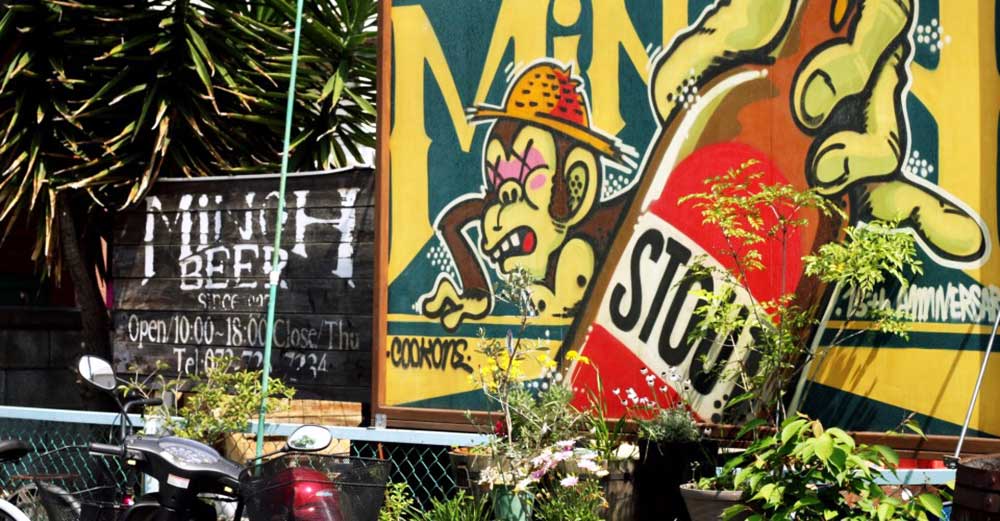 Until about 25 years ago, Japanese law prohibited anyone but the biggest commercial brands from brewing and selling beer. But with the relaxation of that outdated regulation, the country has witnessed the opening of several small craft breweries catering to both domestic and export markets. With the country’s major cities like Tokyo and Osaka emerging as the dominant centres for craft beer and a national calendar blocked with festivals dedicated to craft beer such as the Saitama-based Keyaki Beer Festival, the Tokyo-based Oedo Beer Festival and the Osaka-based Craft Beer Picnic — the sheer strength of Japan’s beer scene today is truly spectacular. 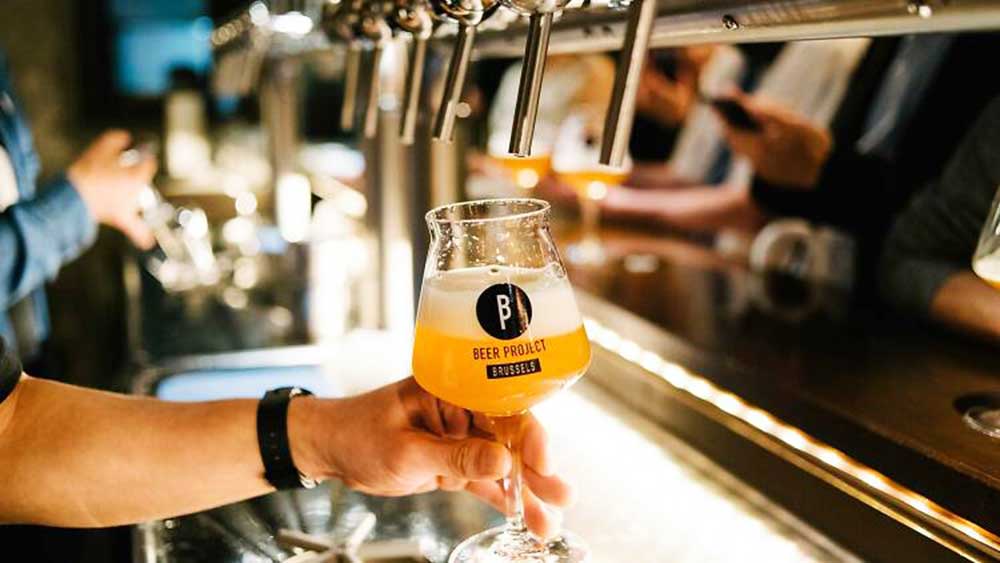 In response, the country’s two mega-brands, Kirin and Sapporo, have also launched their own craft lines. Kirin revived the ‘Spring Valley Brewing’ brand while Sapporo purchased the US craft brand ‘Anchor Brewing’. 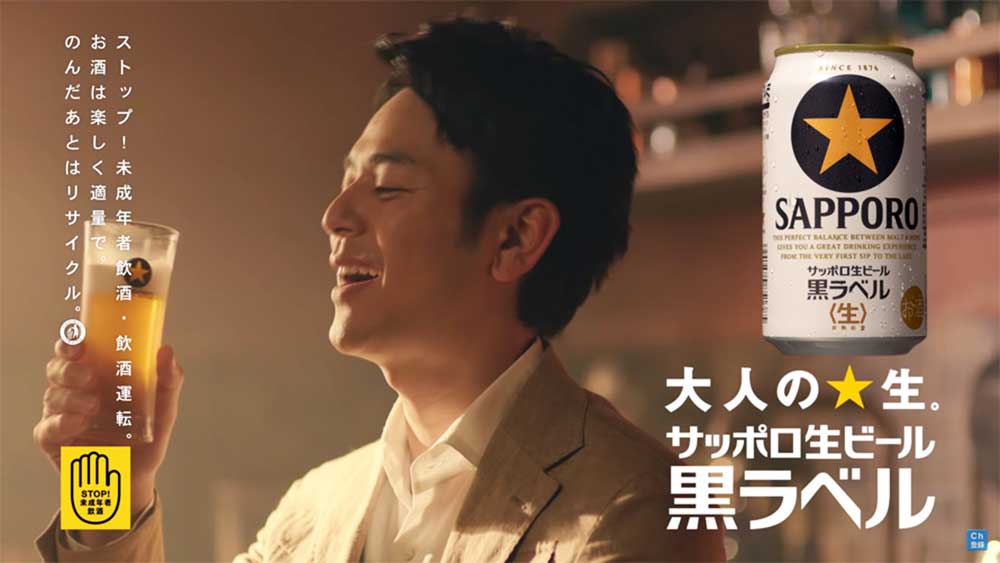 If you ever visit the country, you’ll find it hard to miss the life-sized billboards and advertisements featuring sharply dressed Japanese men admiring their pints of frothy beer. One almost immediately notices the unfettered, inexpensive access to beer; from local ramen-serving inns to vending machines to convenience stores – at any given point of time, you’re always just an arm’s reach away from a refreshing can or pint and cracking open a cold one over a quick lunch seems to be the standard norm for business-suit-clad workers. 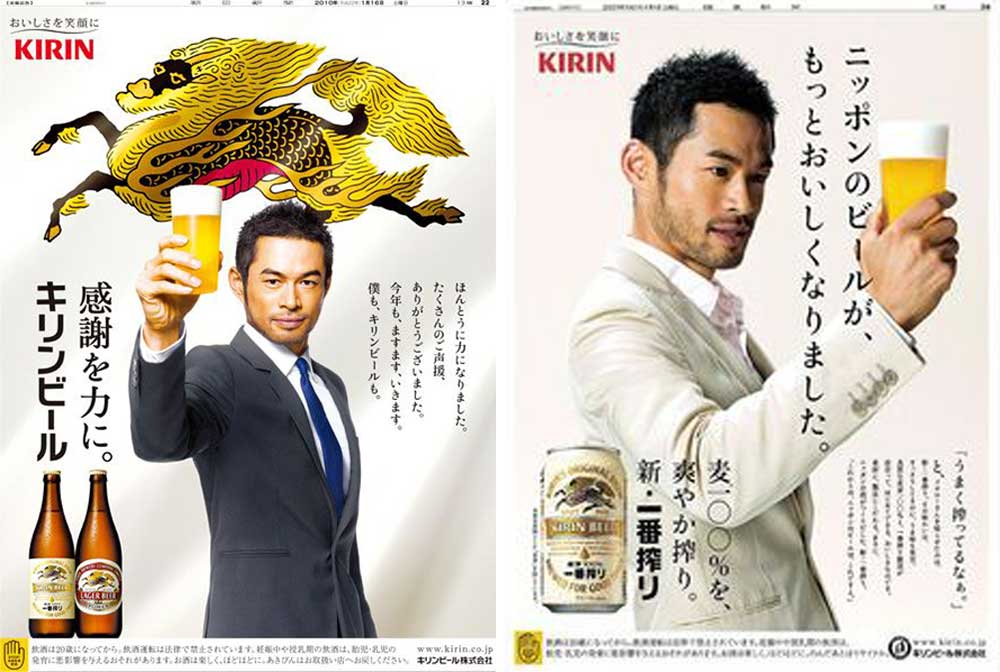 Which brings us to Japan’s surprisingly liberal outlook towards when or where a beer can be enjoyed. Drinking on the streets is perfectly legal in Japan; it is just as normal to see someone taking a sip from a freshly opened can of Asahi on a bullet train at 11 in the morning as it is to see someone chugging some beer in the park after sunset. Many even argue that the Japanese perceive beer as a soft drink rather than an alcoholic beverage – more than the people in the West. While some criticise these liberal drinking policies – many are also of the opinion that this relaxed view of public drinking plays an important role in promoting a healthy socialising atmosphere for both the young and the old alike. So no hiding away beers in brown bags or slinking away into the private corners of your apartment to enjoy a cold brew! Cracking into a cold one under the beautiful sakura-studded trees during hanami parties every spring and breaking into cheers of ‘kanpai‘ is the way to do it here in this country! 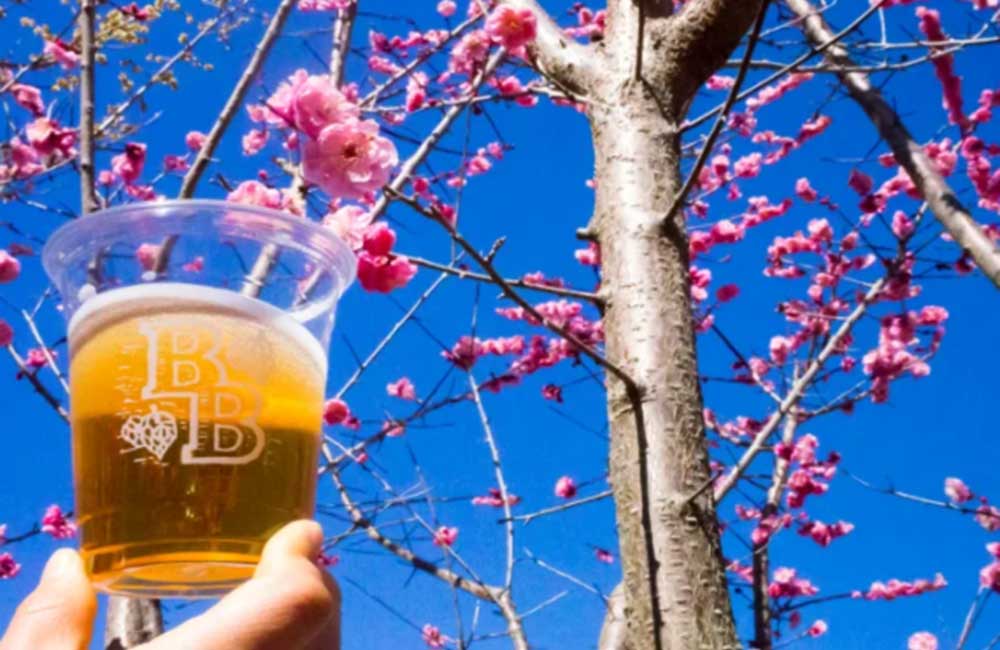 And last but not the least, when out drinking with Japanese, always remember to bring your manners! The Japanese are very particular about drinking etiquette but a few tips will help you get by. First off: never drink directly from a larger bottle that’s shared amongst the guests. Instead, drink out of a smaller glass. And second: never fill your own glass because the Japanese consider it to be both impolite and ominous. Rather, let your drinking companions pour your beer first, followed by them doing the same for you. Third and most important: wait for everyone to be ready with their filled glasses – and then raise your glass and toast ‘kanpai’ (pronounced ‘gahn-pie’). Once everyone joins in the toast, only then should you start drinking!