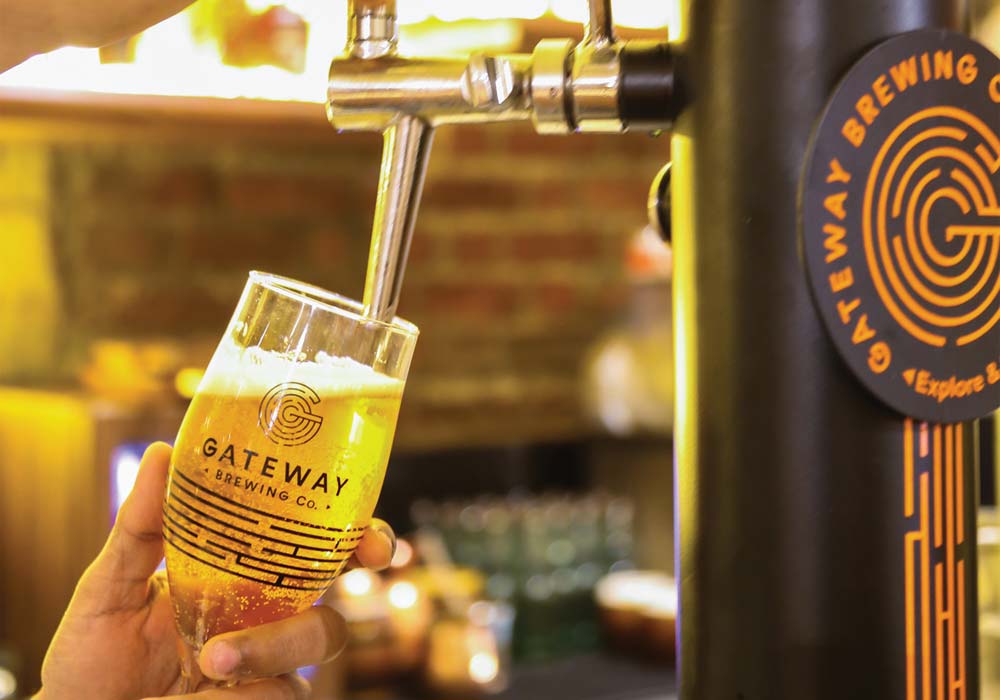 Beer enthusiasts say craft beer is a style statement. And a subjective one at that! Most people, who have a deep passion for beer will appreciate craft much more than regular beers. Those with even more passion set up a brewery!

At least Navin Mittal did just that.

With a Master’s degree in Business from Clark University, USA, Navin learnt brewing at Brewlab.co.uk. But after returning from the US, where he had been a home brewer, he missed his craft beer in India.”The only option we had for beer was kingfisher, when I got back in 2006,” he recalls. At that time, the laws in Maharashtra had nothing about setting up microbreweries–no laws, no regulations, and no future either.

Navin researched online vociferously for any indication of what could be done with the market, beer had to be a focus. “There were a million people in the US who make beer as a hobby,” he says,”but it is illegal in India.” So he started reading up and maintained a blog about beer and brewing. That is how his current partners Rahul Mehra (with a degree from IHM Aurangabad and the University of Hudderfield UK). & Krishna Naik (a techie with a Master’s Degree in Business from IE Business School, Madrid), reached out to him. They were all interested in this work, but didn’t know where and how to start.

The first plan was to set up a brew pub, but there were policy restrictions on a brewery and pub in Mumbai. So the next best thing was to manufacture beer and sell it on tap.  Along with his partners he decided to brew classic beers using ingredients locally available, keg and sell it. They would have the freedom to try various tastes and the pleasure of brewing new flavours. The name would be on the city of its birth Mumbai
– Gateway Brewing.

At that time, the laws in Maharashtra had nothing about setting up microbreweries-no laws, no regulations, and no future either. 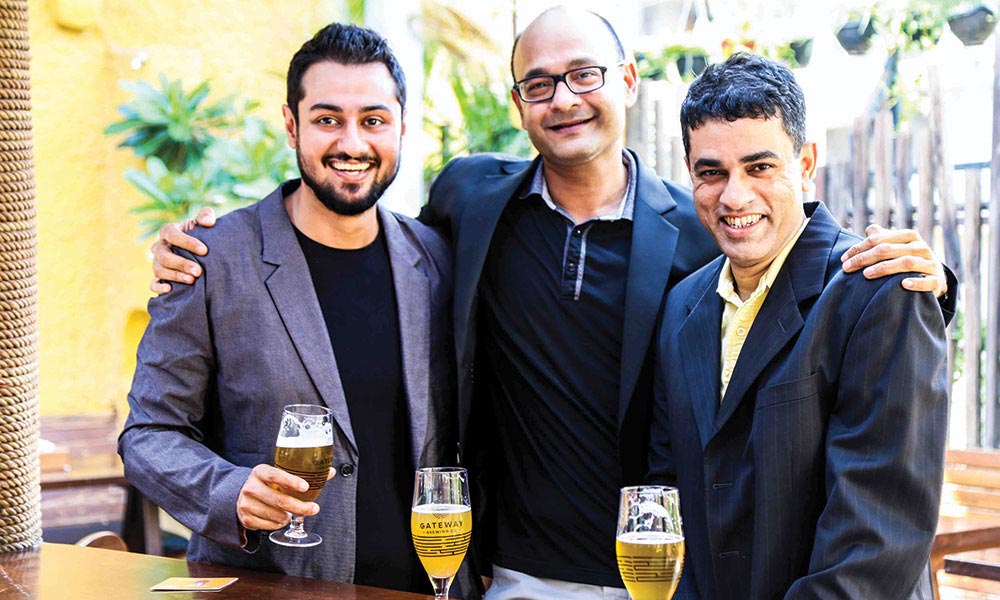 Approaching the Excise department, they explained the process, met with government officials and administrators to explain the concept. They made applications and presentations and were told that they would get a decision after ten days–which lasted a whole two years!

Starting in 2011, they worked relentlessly to create the industry in Maharashtra. While the policy existed, no other department allowed permissions-after all it was alcohol, and these were permissions required from pollution board, industries department, even BMC. Since this was by fermentation, the laws were also about pollution control! The fight was not only for regulations, but to also explain to the law makers that the micro-brewing industry wasn’t polluting or hazardous, and needed to be deregulated from these laws. “We needed a strong policy on brewing industry itself, and then taxes and duties,” says Mittal. Approaching the excise department, they requested to allow manufacturing in areas where all these permissions can be given.

Sale could be elsewhere.

Finally in 2014, the permissions came through. Gateway brand could now be manufactured and kegged and sold in other pubs and outlets. “We were over the moon, since we had already invested in real estate, equipment and other things,” Navin says. After having invested about Rs.3.5 crores, this was welcome news!

Gateway has some distinctive styles- German style wheat beer-White Zen, Indian Pale Ale (IPA), Doppelganger, a dark wheat beer and Sidecar, an apple cider beer. Gateway Beer is now available at about 70-75 bars in Mumbai. Gateway as a brand launches a new beer every month, after consulting with chefs, brew masters and the client bars. There is constant innovation – consumers get something exciting to taste and brewers get something exciting to create. A good example is the Kaapi Stout that was released on their second anniversary- brewed with roasted black barley and single estate coffee from the south. 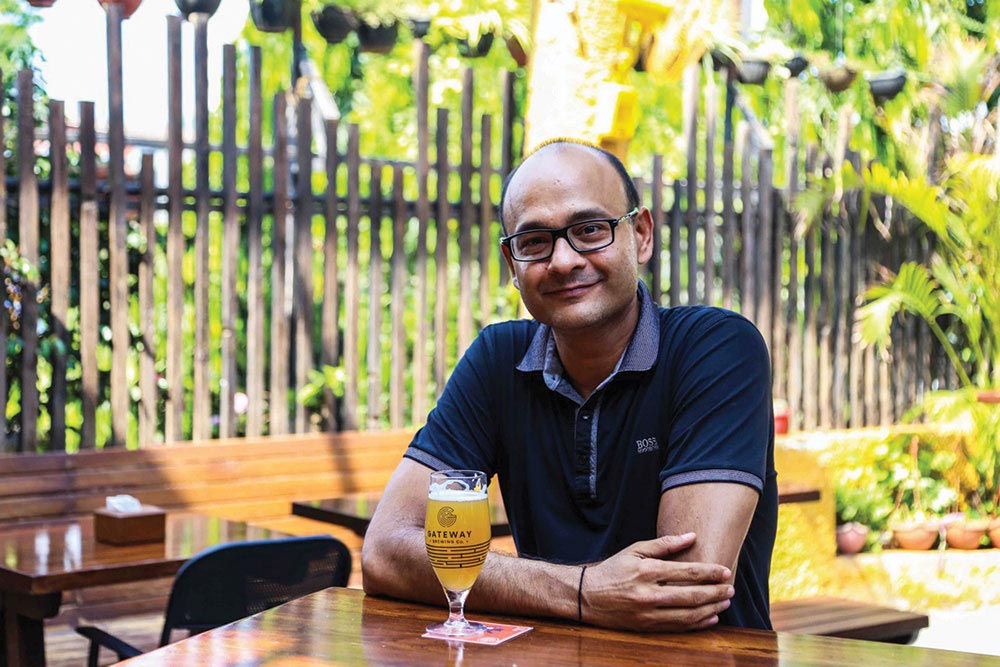 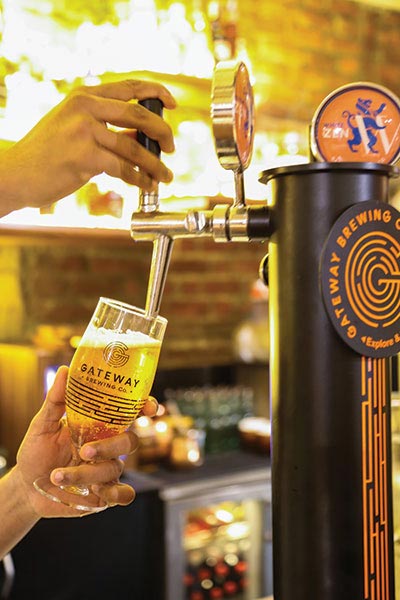 The market, Navin says, has grown over the last two years. Along with it, the base market has developed as well. Earlier, there were no equipment manufacturers, but today, breweries have a wide choice.Today, people love the craft which we give. They are loving the unique, different tastes which are far better than which you would get five years ago. There are a number of vendors for all other things-glasses, coasters, and business is growing. Gateway buys almost 500 glasses every two or three months and coasters on a regular basis. Every supporting industry-equipment, raw material, interiors, accessories, glasses; crockery-is growing with it.

Today, Gateway Brewing  has maxed out its installed capacity, “Initially we had capped out at 2 lakhs litres a year, and then we met the excise department and asked for an increase allowance for capacity, and now it is 5 lakh litres a year,” says Navin.

In Maharashtra, the brewery licence has been there for some time, and a manufacturer can sell it anywhere. They choose to manufacture and sell within the state to escape taxes and transport. While movement of beer is allowed in kegs, microbrewers cannot sell in bottles while bigger brands can. “There are restrictions for no reason, maybe due to no proper understanding by department of the industry,” he adds.

Gateway Beer is fast reaching its highest point, says Navin, who is a craft beer enthusiast himself,” and I believe that people who like craft beer like to explore new tastes.  We know people embrace new tastes, so the markets want a choice and a number of varieties to choose from. A few years ago, you could order Kingfisher, Ultra or Strong, Hayward’s, and they all tasted the same. Now there is a choice and people prefer that. That should be the growth path.”