Home / Brands & People  / Bringing back the joy with the Grid

Bringing back the joy with the Grid 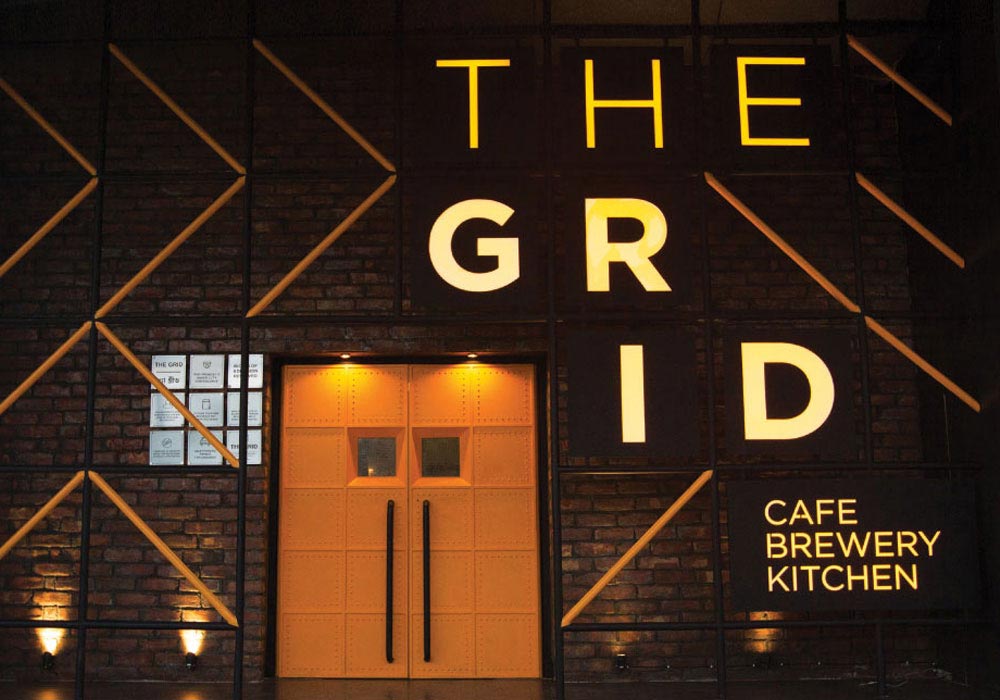 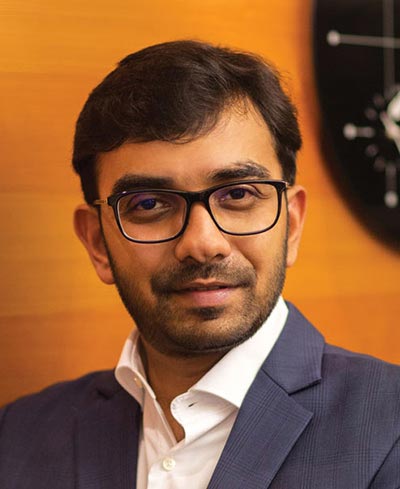 Tucked away in the centre of Calcutta, lies its precious treasure – The GRID.

Various elements across the corners of the world have united for the love of great beer, good food and everything in between to bring alive the hottest Brewpub in the city. As night dawns upon the city, the gastropub, spread over a humungous space of 10,000 sq. ft, becomes a beautiful time-lapse of loud music, great vibes, warm smiles & friendly greets. For the love of beer and only great beers, Gaurav Karnani started the brewpub in 2016 to share his passion with the fellow citizens. Taking a breather from his corporate companies, he pursued curiosity and The GRID was born.

Tourists see, and travellers seek. And that is how Gaurav Karnani fell in love with craft beers, while embarking on a travelling spree across the world. From Germany to Belgium, and Mumbai to Bangalore, he left no brewery undiscovered. Being a beer connoisseur by now and having read about the beauty of craft beers, the thought of building one was already brewing! One fine January evening, while he was enjoying his favourite pint craft in Bangalore, he met the Brew Head and was thrilled to discover the beauty of crafting beer. At that very moment, he decided to set up a brewpub in Calcutta, his hometown and produce beers that would inspire, awe and entice all the beer lovers in the city!

The GRID is the flagship project of the parent company, Karnani F&B Specialties LLP. The CEO, Mr. Gaurav Karnani wants to redefine the F&B scenario in Kolkata and thus, founded the company along with wife Ritika Karnani, who handles the F&B department of The GRID. We spoke with Mr Karnani on his venture into the F&B industry and the journey till date.

What is the concept behind The Grid?

Constructed on the concept of an Un-finished Warehouse, The GRID exudes the charm of a large Industrial workplace. As the name suggests, the 10,000 sq. ft. conventional space is subdivided into a framework of 8×8 square grids and then mixed up, like a Rubik’s cube. The resto-bar is microcosm of amazement and chic industrial space subdivided into nine interesting sections; each bewilderingly different from the other, giving the attendants a fresh experience, each time they visit.

The mad genius behind the nine sections is the thought to give the audiences a multi-layered, fresh experience, each time they visit the place. 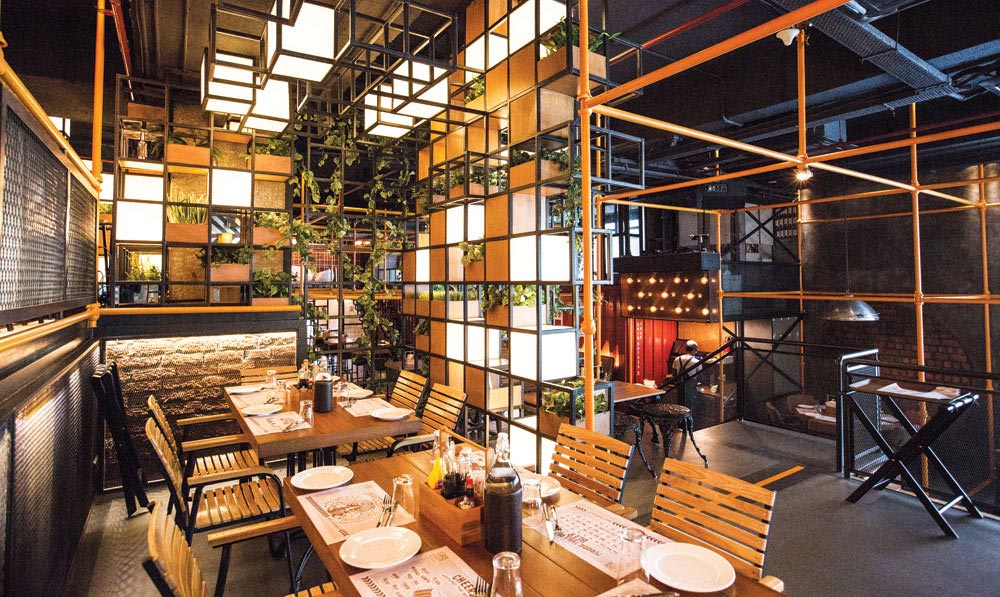 Is this your first venture into the world of F&B?

The GRID is our first venture in the F&B world and the experience has been euphoric. Being absolutely awed by the response of the city, we are working our ways to expand laterally.

Talk to us about the interiors at your microbrewery? Does the design reflect the theme?

The interiors of The GRID literally are an inception of grids. Mad, eccentric elements sourced from across the nation make the interior design marvel, The GRID. The huge scaffolding structure and the 92 ft. Lego bar are two of the main attractions at The GRID. The clear, industrial glass walls and the lights sourced from ship yards and old ships give The GRID a rustic vibe. The double-heighted, mezzanine marvel gives every individual enough space to let their hair loose.

How did you settle on the name? Is there a meaning behind the same?

We were so engrossed in the making of the brewery that the name somehow slipped our mind. Owing to our interiors, we took the structures too literally and that is how we named it The GRID. And now when we ponder, the name just makes so much sense.

We planned on making different styles which an Indian palate can appreciate. The balance has to be dialled in appropriately and after hard work, we finally achieved the same. We have four beers on tap – Caldera (Hefeweizen), Estuary (Witbier with berries), Piedmont (Blonde) and Tombolo (Stout). We have two more taps – one for the experimental beer and second for Eskar (Apple Cider).

Koushika V, our Head Brewer started his journey into craft brewing a few years ago as a hobby and then pursued as a full-time profession. After completing his Master’s from Scotland, his interest in handcrafted spirits also started budding along with craft brewing. There weren’t many craft brewing companies back in the time (Circa 2012), so he joined Geist and helped them setup 2 brewpubs namely – Brewsky J.P. Nagar and Byg Brewsky and did a small gig with Big Pitcher before landing here.

When he got an opportunity to influence the craft drinking culture of Eastern India, he was extremely thrilled. The diverse culinary experience in Calcutta helped him formulate local twists to different styles of beer.

He was holding an experimental amber ale while narrating his story, “Brewing beer is like taking care of an infant. The batches are cranky, you have to take good care of it. It’s important to keep a check on it at all times, so it doesn’t deviate from the actual style guidelines too much. Brewing is the easiest part, but the anticipation and the pressure increases when it’s fermenting, and once done the maturation can take a while. Only a true brewer or a well-travelled enthusiast can distinguish between a finished beer and a green beer, which is vital. Once it’s ready, the joy is unparalleled. Brewing is a continuous cycle where hygiene plays a key role along with other operational challenges, excise laws, inventory management, equipment maintenance etc.”

Our brewing team is well versed in the art of brewing and are working round the clock, ensuring the customers are always happy with the product. As brewers, we are constantly innovating and we want the whole India to develop a craft beer drinking culture without making it into a taboo, where self-control and moderation is key.

As a proud member of the brewing team at THE GRID, we strive for excellence, maintain international standards, ensure CIP regimes are appropriate and hygiene is maintained throughout the brewery. All these steps help us give consistent products. 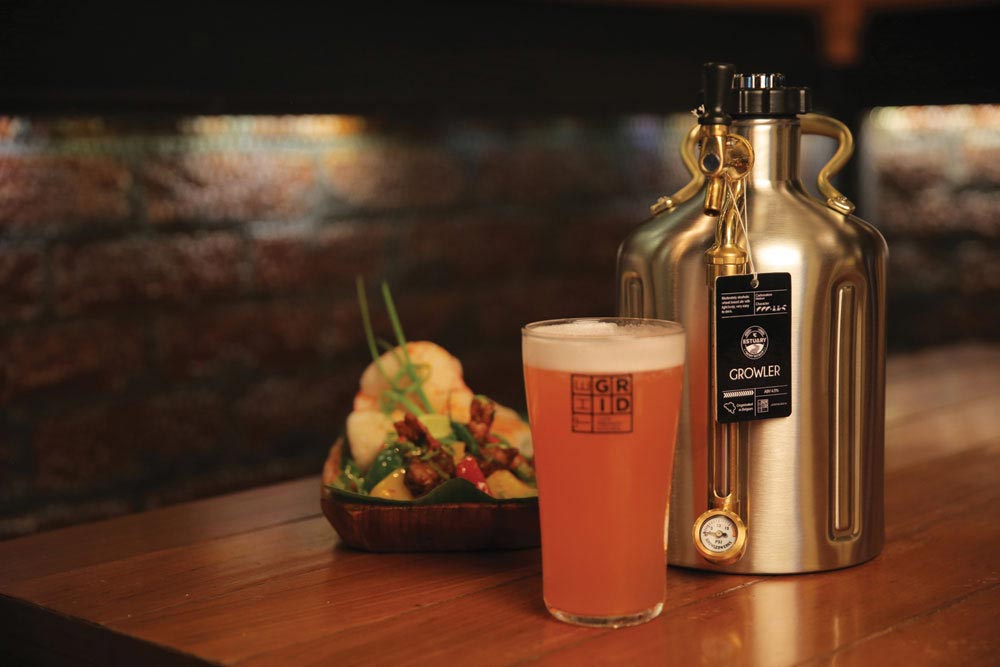 What are the challenges affecting the production of a good beer?

Well, we take our beer production too religiously to affect the quality and consistency of the beers. But the above is dependent on factors like sourcing the raw materials, logistics, ever increasing demand, extended man hours, etc are some which can affect our production of quality craft beer.

We have an exhaustive procedure that we follow to maintain our quality. Our hygiene parameters are not to be messed with. The entire team abide by their duties – cleaning the tap lines often, keeping the keg clean and contamination free. We are sticklers for perfection and that is when we designed our own Keg washing machine. In crux, our eccentricity helps us sail through all the challenges.

What would you say the difference is between the beers produced at The Grid and somewhere similar? 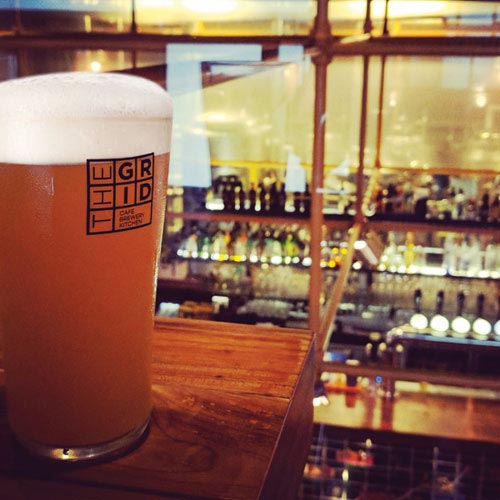 When it comes to our beer line-up, each one of them are showstoppText Block Shortcode Settingsers! Distinct and different, our beers connect with people at different levels. Having said that, our beers – Stout, Hefeweizen, Wit Beer, Ales and experimental beer with local twists, are inspired by the greatest beers we have tasted, sampled across the world. Within five months of our inception, Piedmont, one of our bestselling beers, won the Best Hybrid Beer Award at the Blind-Beer Tasting Competition organisText Block Shortcode Settingsed in Pune.

Our beers do the standing out as the matter of fact. A good brew owes its existence to a good crew. The consistency in our products is maintained by the constant efforts of the brilliant team. Apart from excellent brewing aesthetics and quality of craft beers, we believe we have fostered a culture that empowers people to be independent. People who enjoy our beers are responsible and the ones behind the mechanism, are independent enough to make the right decisions.

How has the market reacted to your establishment?

The response has been overwhelming and is increasing with every passing day. What makes us the crowd puller is our unbiased dedication towards food, brewery, service, eclectic atmosphere and music. To keep up with the demand, we have increased our cold side by adding fermenters. We have recently launched Growlers on our second anniversary for the beer enthusiasts to rejoice!

Talk to us about the challenges that affect The Grid on a daily basis?

Operating a brewpub brings along a long list of responsibilities and challenges, and given the virtue of our footfall, it makes our job a lot more demanding.

Synching the crowd with the pace of kitchen and brewery is one of our chief challenges as we do not compromise with our quality. But with the dedication of our brilliant team, we overcome these challenges quite efficiently.

The evolution has been humongous and the ones in the market are thrilled. The consumption of beer is becoming socially acceptable and is helping people to develop a wider palette. In the present scenario, I believe the more, the merrier. No amount of craft breweries would be too many craft breweries as they would contribute to further expansion of the market. 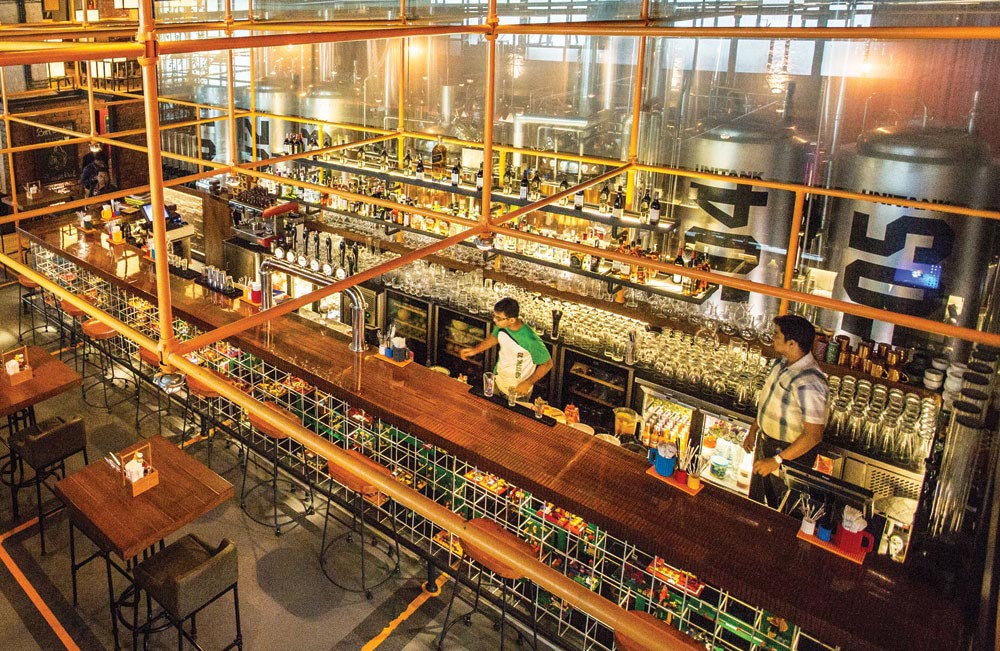 There are mainly two rules to follow – Abide by the rules and Go berserk! The first step would be getting all the licensing and excise norms in place and once it is done, experimenting is the key.

Also, having a supportive team adds feather to the crown.

And lastly – Have fun, travel, get samples and when you freeze on the perfect style, the feeling is ecstatic.