Bira 91 Partners With Warner Bros. To Launch House Of The Dragon Merchandise

Bira 91, the world’s fastest-growing beer brand, in collaboration with Warner Bros. Consumer Products, announced today the launch of an exclusive merchandise collection inspired by the newly released HBO Original series House of the Dragon, the successor series to Game of Thrones.

The exclusive House of the Dragon x Bira 91 merchandise celebrates the season of Fire and Blood and is dedicated to fans across India. The collection includes products inspired by the Seven Kingdoms and is perfect for fans to display their love for the world of Targaryens, such as limited-edition glassware, graphic t-shirts, and collectibles like bar blades and coasters. Just in time for the festive gifting season, the exciting collection will be available to Indian fans for pre-order starting 19th September on the Bira 91 Merch Shop.

“Bira 91 and the House of the Dragon coming together is the perfect recipe for a blockbuster! We are thrilled to partner with Warner Bros. Consumer Products and celebrate the release of House of the Dragon with the launch of our exclusive merchandise collection. As a lifestyle brand, we strive to build unique consumer experience across many touchpoints and this collaboration does just that. As fans of the Game of Thrones franchise, we are really excited for the new show and are sure that this season, fire will truly rein” – Ankur Jain, Founder and CEO, Bira 91 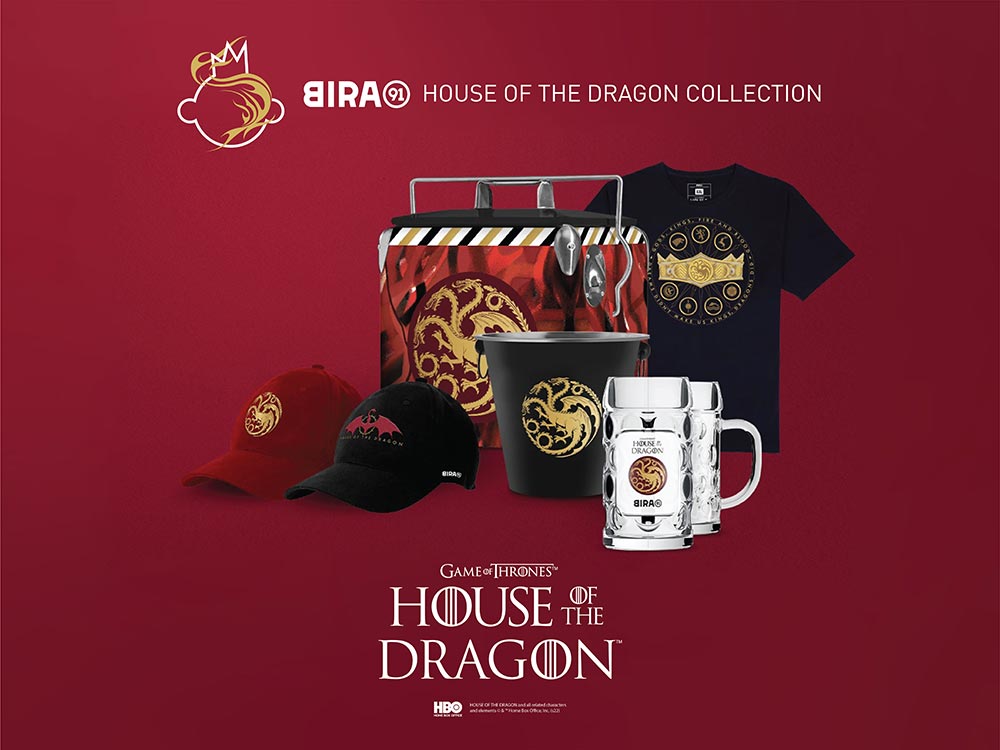 “Already ‘House of the Dragon’ has received a tremendous response from fans across the world. To continue to build the excitement, this unique association with Bira 91 will bring the show even closer to the fans in India, giving them yet another opportunity to enjoy and experience this legendary franchise.” – Vikram Sharma, Head of Consumer Products, Advertising & Partnerships, Warner Bros. Discovery India, Southeast Asia & Korea

To celebrate the Bira 91 x House of the Dragon collaboration, Bira 91 conceptualized a unique activation placing life-size dragon eggs at multiple partner restaurants and bars across Delhi, Mumbai, and Bengaluru. This was accompanied with a social media campaign wherein Game of Thrones and House of The Dragon fans stood a chance to win the limited release merchandise.

House of the Dragon streams on Disney+ Hotstar in India with new episodes available every Monday.

Warner Bros. Consumer Products (WBCP), part of Warner Bros. Discovery Global Brands and Experiences, extends the company’s powerful portfolio of entertainment brands and franchises into the lives of fans around the world. WBCP partners with best-in-class licensees globally on an award-winning range of toys, fashion, home décor, and publishing inspired by Warner Bros.’ biggest franchises from DC, Wizarding World, Looney Tunes, Hanna-Barbera, Game of Thrones, Cartoon Network and Adult Swim. With innovative global licensing and merchandising programs, retail initiatives, and promotional partnerships, WBCP is one of the leading licensing and retail merchandising organizations in the world.

A refreshingly modern beer brand, Imagined in India, Bira 91 aspires to bring flavorful beers to the new world. As one of the fastest growing brands in the world, Bira 91 has built a diverse portfolio of award-winning beers, one for every occasion, and aims to drive the global shift in beer towards more color and flavor. Bira 91 is now enjoyed in over 550 towns and cities spread across 18 countries and brews its beers across four breweries in India. Bira 91 has its flagship taproom in Bengaluru, where it releases one new experimental beer every week, paired with its curry-shop menu. Bira 91 also offers branded merchandise across categories such as glassware, apparel, and gifts, to make every day a lot more playful. Established in 2015, Bira 91 is driven by a dynamic team of over 600 passionate beer lovers and is backed by Sequoia Capital India, Sofina of Belgium, and Kirin Holding of Japan.