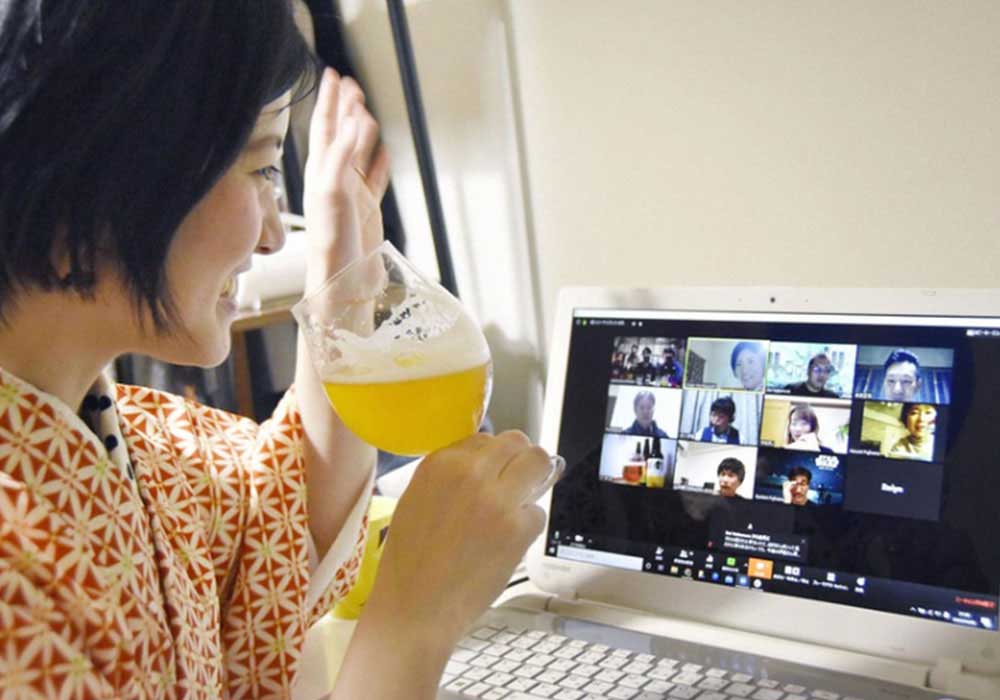 TOKYO (Kyodo) — Drinking parties are increasingly being held online in Japan as more people stay home in self-isolation to prevent the spread of the novel coronavirus and pubs operate for shorter hours at the request of local authorities.

Online parties are expected to become a new way of communication for those compelled to remain at home but who want to keep in touch and casually chat with friends as major Japanese cities remain under a state of emergency through May 6 due to the virus pandemic.

On the night of April 8, a day after Prime Minister Shinzo Abe declared a state of emergency to fight the virus, Chiaki Michibayashi, 31, held out a glass of beer toward her computer screen at her home in Funabashi, Chiba Prefecture near Tokyo, in a “toast” with other online party participants.

Chiba is among the seven prefectures placed under the state of emergency.

“This party was organized because you can’t easily go out now. So let’s enjoy,” said an organizer of the gathering.

Japandemic Co., a brewery in Matsuyama, the capital of western Japan’s Ehime Prefecture, organized the party via Zoom Video Communications Inc.’s online conferencing platform. It was attended by about 10 people from Tokyo, Kanagawa, Hiroshima and other parts of Japan.

The company delivered its DD4D craft beer to the participants before the event.

The party over Zoom was awkward at first, with bad voice quality at times, but as people talked about their favorite types of beer, conversation, laughter and drinks began to flow.

“Everyone drinks the same beer and enjoys the same taste and flavor,” said Michibayashi, an office worker who has joined similar virtual parties with her friends and coworkers. “(Zoom) is an interesting tool for people who really love drinking to come together,” she said.

A 36-year-old male office worker from Ichikawa, Chiba Prefecture, used to meet friends a few times a month for drinks but has been organizing online drinking parties since late March.

“I wanted to support my favorite bars as much as possible but it has become difficult,” he said.

Relaxing with alcohol at home, the parties can last more than five hours and as some people disappear from the screen, “it feels like we’re bar hopping” with the remaining members, he said.

To keep the mood light without being weighed down by stories about the COVID-19 disease, the man said he proposes chatting about such topics as “your favorite movies.”

“I think there is little resistance to these types of gatherings because we use online communication like texting every day. Instead of being a real replacement (for conventional drinking parties), it may become a new way” of sharing experiences, he said.