To all the fellow Mumbaikars stuck home because of the lockdown, here’s some great news to cheersing. All the beer buffs may want to put their hands up as Mumbai’s pioneering microbrewery that helped shape the craft beer policy, is all set to launch its retail store in town. As the guessing game plays along, here’s what it is – Gateway Brewing Co. launches their very first Retail store right here in Amchi Mumbai.

This shop is pleasingly stationed near Gateway of India, behind Taj to be precise, on Mandlik road, Ramnimi building. It is a small shop of 200 sq. ft. modelled after the look and feel of the taproom: chic, casual with exposed brick walls & iconic beer brand graffiti on the wall. It will serve as a shop for their beers in bottles & kegs for all the mighty liberationists trying to conquer the best beer out there. As a team, Gateway brewing Co. is keen on introducing the crowd with new flavours, while serving them the best quality beers.

They believe in maintaining cordial relationships with their fellow mates, hence, there will be a pin-up board in the store for promoting other local businesses, and to display their on-going offers. While hoping to leverage other locals, they are very keen on sequentially helping the friends with new offers, this in turn will also help them gain recognition and promote themselves as a brand in the midst of the pandemic. 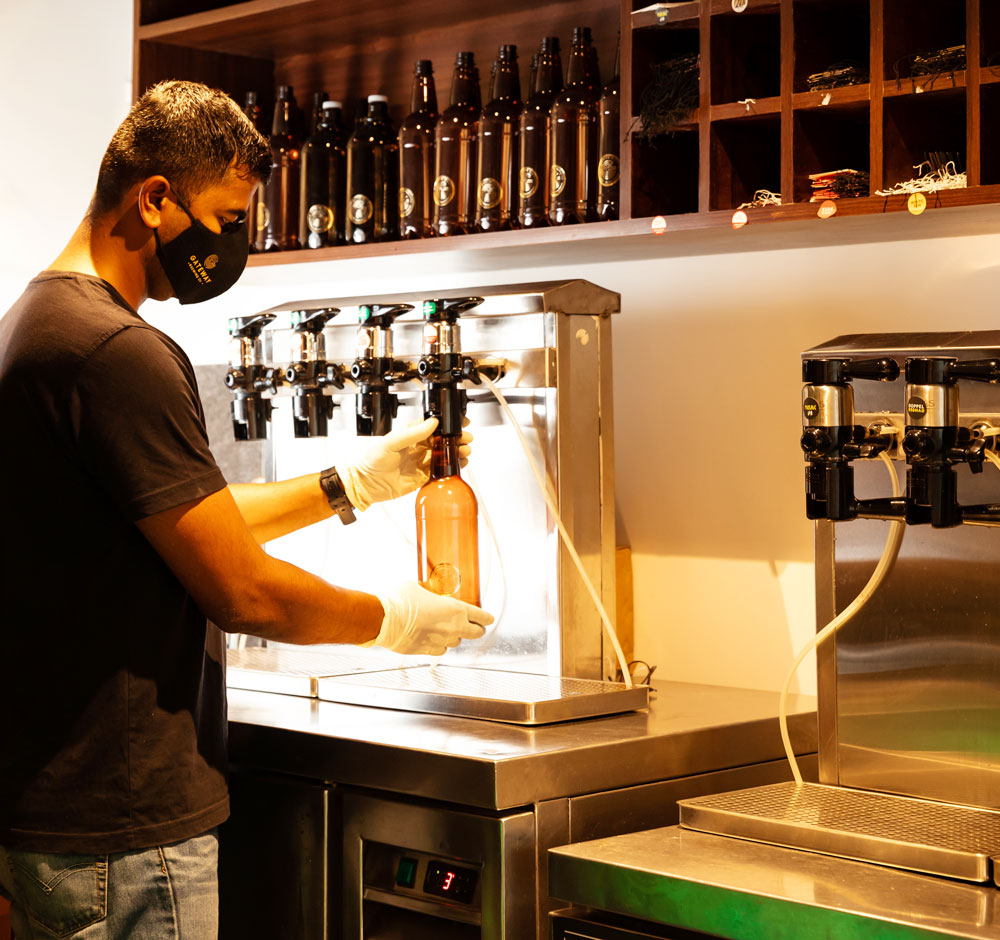 An anecdote for one such vision would be that, over the last 7 years comparing their sales, they have seen that white zen (all kinds of wheat beers) were at least 60% of their sales, and other micro-breweries as well. While restaurants and bars still show the same percentage of wheat beer consumption, their direct-to-consumer business shows 30% preference for wheat beers, and an astounding 30% preference for IPA which historically has been only 10%.

Founded by Navin Mittal a.k.a IndianBeerGeek, a pioneer in beer making, he started off with blogging about his home brewed beers which was recognised and appreciated by beer lovers. Not only did this make a way for the people to understand beers by heart, but it also helped two beer lovers (Krishna Naik & Rahul Mehra), come up with a humdinger of a start-up with the help of this pioneer. Their only collective vision was to serve fresh craft beers that brought people together. Owned by three Hearty Mumbaikars, founded in 2011 as the first microbrewery in Mumbai, and commercially launched in 2014, Gateway brewing Co. has come a long way and only plans on looking forward to growing more. Their motto is to serve fresh and flavourful beers to all the fellow Mumbaikars by bringing in a wide variety of quality beers. Navin, being a beer prodigy has brewed over 150 batches of beer himself, and most of what one drinks here at Gateway brewing co. could be one of his recipes (obviously with a lot of contribution from their brewers) tweaked to suit a 1000 litre batch size. 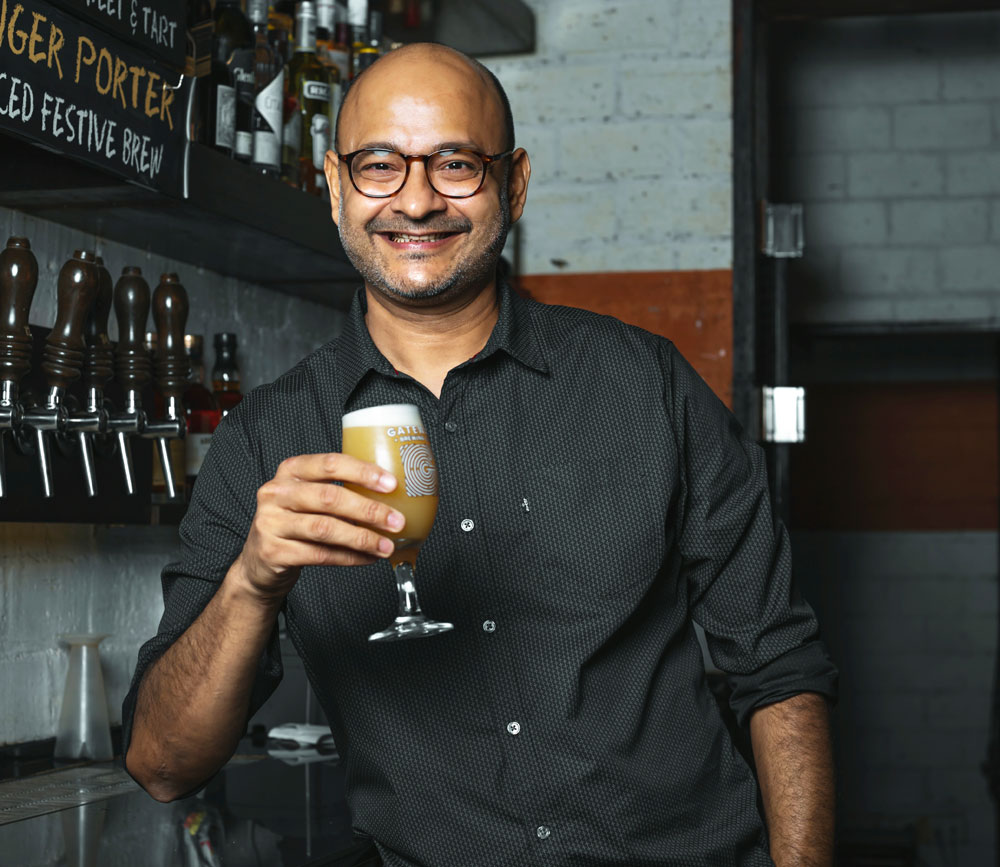 The team recognizes the wants of fresh & flavourful beers; they know that beer buffs will acknowledge the quality of craft brews Gateway Brewing Co. has to offer. Unlike other commercial brands, they don’t pasteurise and filter their beer, Hence, the goodness of yeast & other vitamins remains. They retain all the benefits of natural fermentation via traditional processes; therefore, they don’t use any colours and chemicals, which also means that now one can enjoy fresh beer right here.

Selling to 100+ bars pre-covid, now, they are directly interacting with the customer via growlers & party kegs. This has been a shot in the arm for the microbrewery businesses, which haven’t had the benefit of bottling and exporting like the big guys, or the other micro-breweries in Goa. They feel lucky to have been allowed to do so.

It is simple to order online; one can either order from their Instagram handle (@gatewaybrewery), or log on to their website which is very user-friendly and easy to understand. Just one click will do the trick.

One should also consider visiting the store once everything is settled to experience the exquisiteness of it all. The walls of the store have a story to tell, they are beautifully designed to show the brewing process and their timeline, all in cool graphics. The walls are going to be adorned with not only their heritage and timeline but also with their flagship brews & new releases. Which means an upgrade in décor every time something new is released, isn’t that fabulous?

Their flagship brews are classics and loved by all since 2014. White Zen – Mumbai’s Original Wheat beer, is light & refreshing with hints of clove & banana; Doppelganger is a dark & Malty beer with a luscious mouthfeel; Mosaic IPA is an India Pale Ale that contains the highly aromatic American Mosaic hops, and for those who love ciders, they also have Side Car, has sweet & tarty notes from the Kashmiri apples.

Their Explorer Series includes, Munich lager which is a classic German-style lager, that has soft malt character & is easily the most quaffed brew in Munich; Bombay porter is a roasty beer with caramel & toffee notes, that origins from London (1800’s); Zini lager is a light and crisp beer with a subtle aroma from the endangered Zini rice of Palghar. The newest member of these exclusive beers is the Hattrick, which was recently launched during the IPL season. Hattrick contains 3 hops (mosaic, talus & Magnum) that make the beer so unique.

All available in a 1 litre Pet bottle and their Party Kegs hold 5 litres, which can provide around 15 glasses of beer.