Everything You Need To Know About Expired Beer 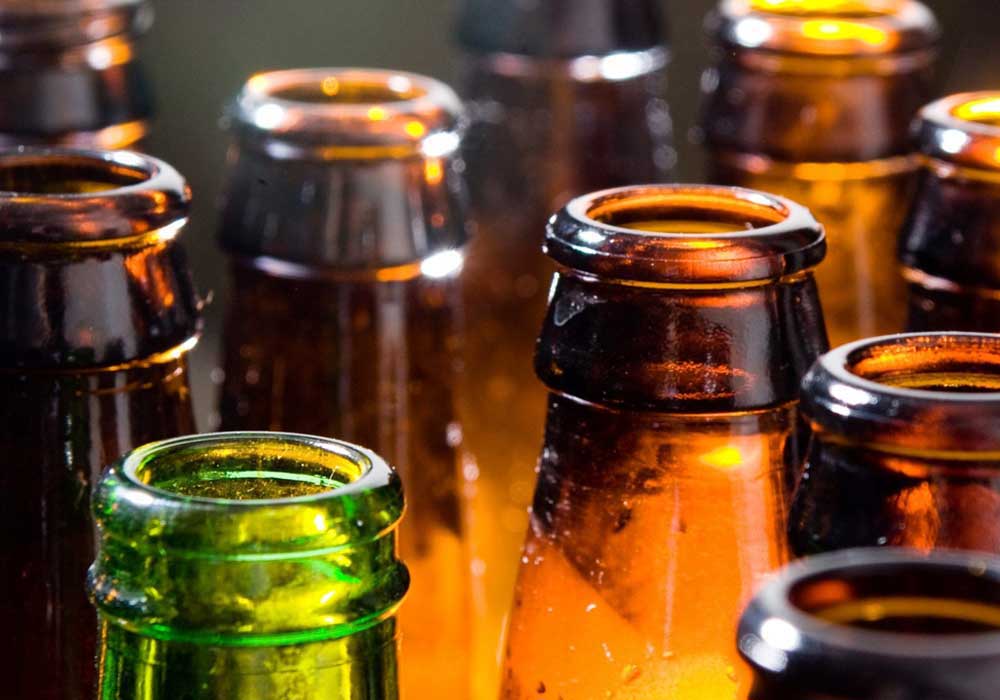 Ever stumbled upon a long-forgotten pint of beer? The first thing you most probably did was closely scrutinise the label for an expiry date. And then, to your disappointment, you found that your beer has indeed, crossed the standard six-month shelf life.

Like all hard-core beer lovers who can’t stand to see a bottle of their favourite beer being tossed away, you will find yourself contemplating whether beer is still safe to drink past its expiry date.

We understand this dilemma – we’ve all been there! So here’s a quick lowdown on what expired beer really means and why you shouldn’t be drinking it. 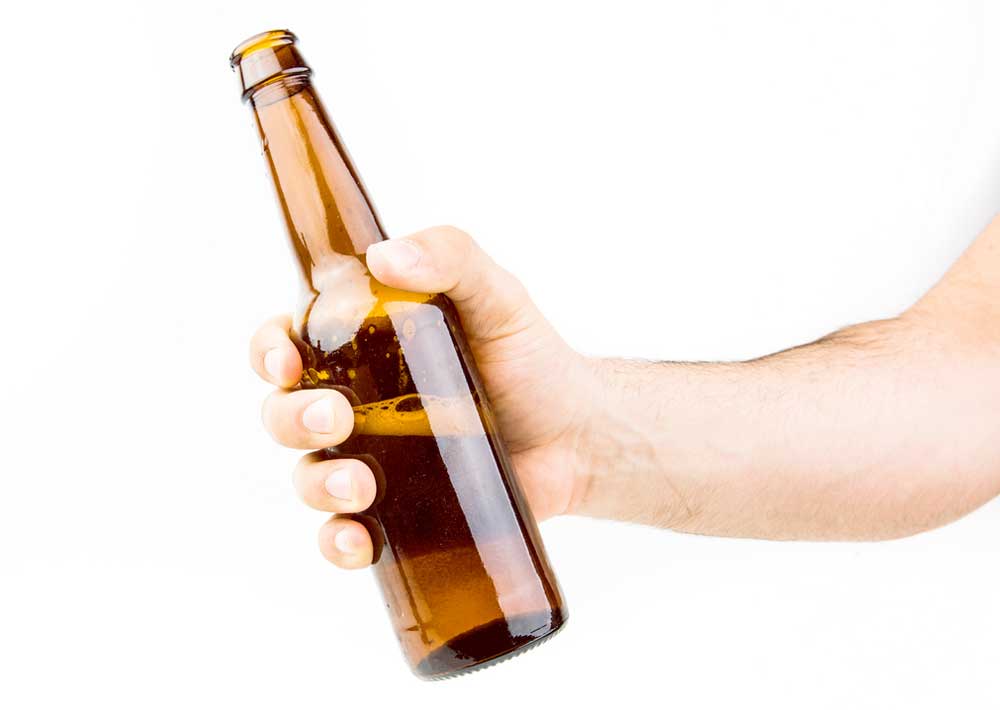 Beer is just like any other food. It’s made from all-natural, plant-based raw materials which naturally decay over time. No matter what extra steps brewers take to prevent beer from spoiling, there is nothing they can do to stop the natural growth of bacteria and chemical reactions as time passes.

Almost every commercially produced beer comes with an expiration date or a ‘best before’ date. Because no beer lasts forever, this date is more of a guideline set by government authorities to ensure the responsible selling and consumption of beer. It works out for brewers as well who want to keep their reputation intact by keeping customers satisfied with great-tasting quality beer. For this reason, an expiry date is added to your beer can or bottle to let liquor stores know when to stop selling beer that may no longer be at its best quality.

You can still buy a beer that’s closer to or past its expiration date but just know that it will have a comparatively shorter shelf life and will need to be consumed soon.

Expired Pasteurised Beer Is Not Toxic 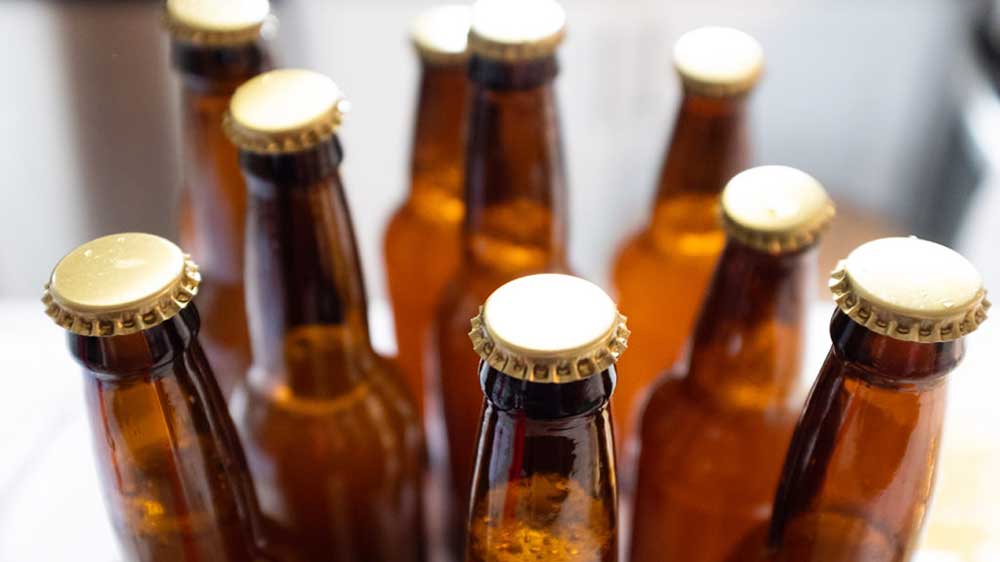 At the very most, you’ll experience a mild upset stomach after consuming pasteurised beer that’s expired.

Many commercial canned and bottled beers are pasteurized the same way as any other product. The cans and bottles are run through a hot water spray that’s around 140 degrees to kill any bacteria and stop any yeast still in the beer from growing.

Unpasteurised beer, on the other hand, is not subjected to this step. Many craft brewers decide to skip the pasteurisation process to retain their beers’ freshness and quality. Unpasteurised beer is meant to be consumed fresh and as close to the expiration date as possible. It should not be consumed stale under any costs as it most definitely can make you sick.

The Average Shelf Life Of Beer 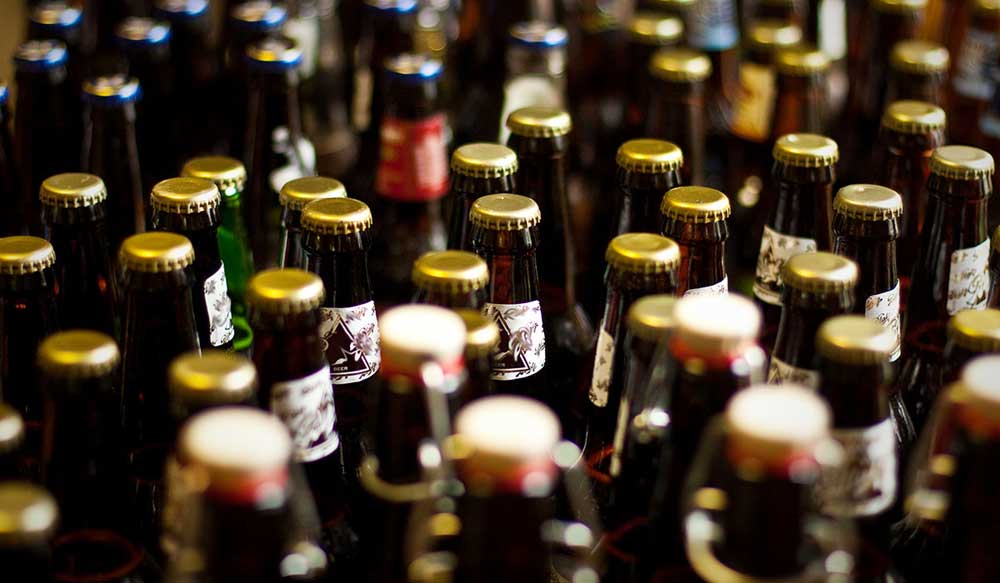 It is important to note that all beers don’t ‘expire’ the same way. It has a lot to do with the beer’s ABV composition and of course, how it has been packaged and stored.

Higher ABV beers (8% and above) like Stouts and Barleywines actually taste better with age so leaving them on the shelf for a few years is ideal, provided you take careful steps to store it properly. Lambics are also more suitable for ageing as they are wild-fermented and the Brettanomyces yeast consumes the complex sugars over a long period of time. This is why Lambics are aged in oak barrels for three to six months – and sometimes even a year!

Opened beer will naturally have a shorter lifespan as it goes flat the moment you break open the air-tight seal, even if you refrigerate it!

As a general rule of thumb, sealed beer is shelf-stable for 6 to 8 months without refrigeration. If stored and refrigerated properly, sealed beer can last beyond its expiration date up to 12 months.

How To Tell If Your Beer Has Gone Bad 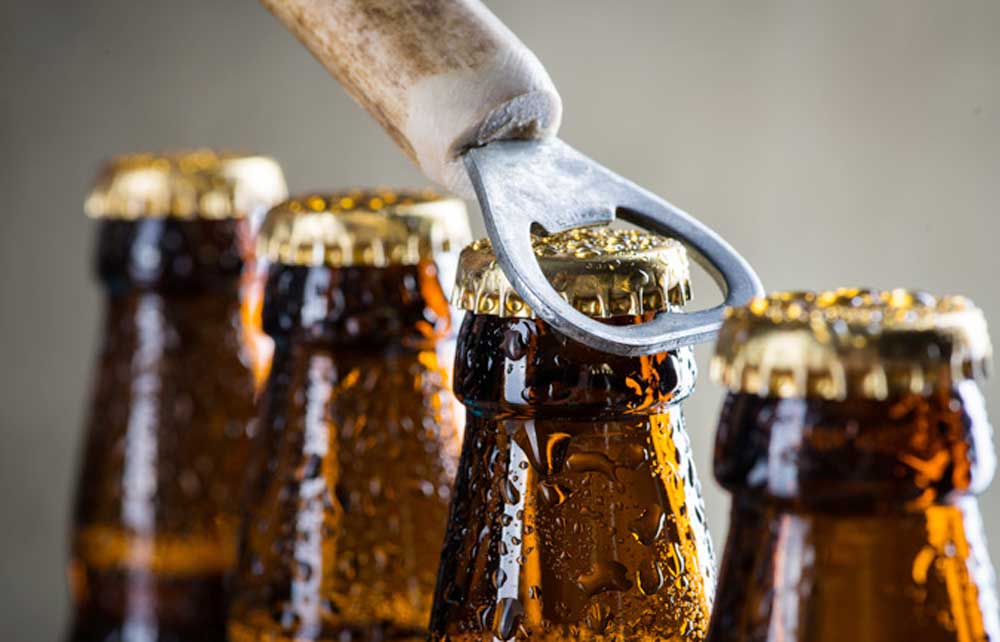 One of the first ways to tell whether your beer quality has deteriorated is by paying attention to the noise your beer makes when you crack open the bottle or can. If there’s an absence of that signature hissing sound when you open it, it means the beer has lost its carbonation.

If your beer is fresh, you’ll often notice white foam rising to the top and spilling over. If you don’t see this happening when you open your beer, chances are it has gone flat.

If you’re drinking from a bottle, it’s even easier to tell whether your beer has gone bad. Inspect the label to check if it’s dusty – this is a good indication that the beer has been sitting on the shelf for a while.

Another thing you can do is hold the bottle up against light and check to see if there are any sediments settled at the bottom. If you do notice this, it’s probably best to avoid drinking the beer. However, there is an exception to this. In some beer styles such as German Weissbier, Belgian Dubbel, etc. which are bottle conditioned, yeast sediments are not considered as a flaw.

You could also check for leakage around the sealed mouth of the bottle – which may be an indication of the bottle and the beer inside it being subjected to high levels of heat at some point.

Finally, if all else fails, just take a sip. You’ll taste the flatness, ‘off’ flavours and skunky aromas right away to know that your beer has lost its quality.

Factors That Cause Beer To Go Bad 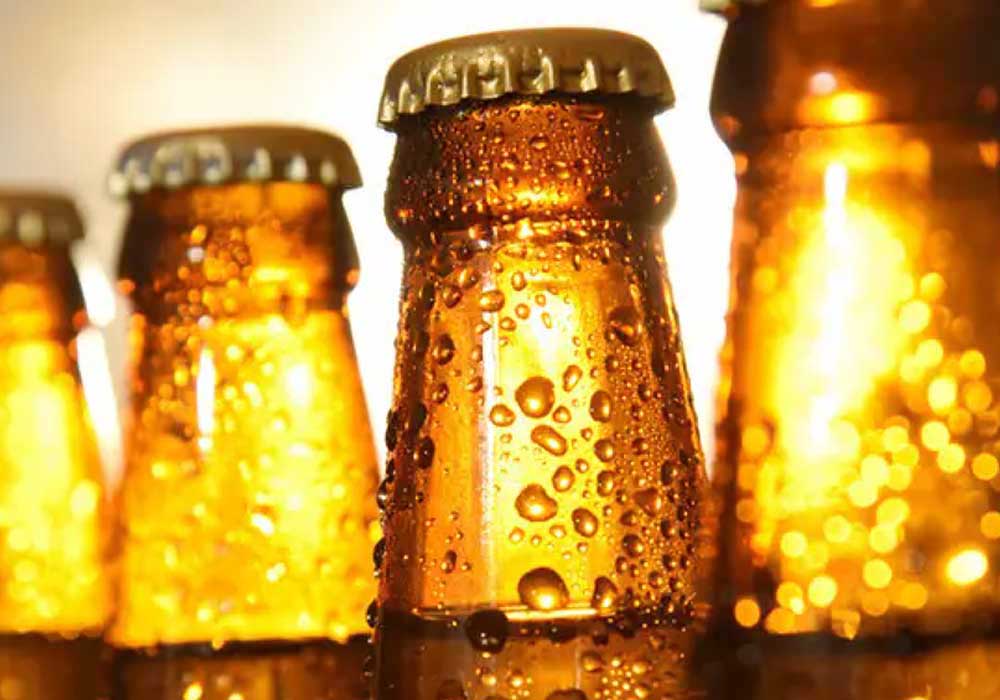 There are three main culprits that cause your beer to lose its quality. These are: light exposure, oxygen exposure and bacteria exposure.

Exposure to light, specifically ultraviolet (UV) rays can cause the hop-derived compounds in your beer to break down and combine with a sulphuric compound. This releases an odour that is similar to that of a skunk’s – and causes your beer to taste like soggy cardboard. Also, it doesn’t take a lot of light to ‘skunk’ your beer; a few seconds of light exposure is enough to do the damage!

Keep in mind that all beers aren’t brewed with the same hop quantities. The more hops in a recipe, the higher the chances of the beer skunking. For instance, American Lagers with low hop content are less likely to skunk in comparison to IPAs that are more hop-forward.

Oxidation is basically the chemical reaction that takes place when oxygen molecules interact with the molecules of your beer and the other ingredients that impart that delicious flavour to your drink.

Oxidation in dark beers convert malt flavours to those of rotting fruit or sherry. In light-coloured beer on the other hand, oxidation will remove all the hoppy, malty flavours, leaving it to taste like wet paper. It is only in rare situations when oxidation works in favour of your beer. For instance, when barrelling Lambics, subjecting the beer deliberately to oxidation under controlled temperatures can improve the flavour and elevate the overall drinking experience of the beer.

Your beer can be exposed to oxygen at almost every step of the brewing process – right from the brewery to the fermentation chamber to the packaging lines and can continue to take place within the bottle after it has been sealed and packaged. Craft beer, on the other hand, is more vulnerable to oxidation as not all small-scale breweries have the expensive, sophisticated equipment that helps keep excess oxygen out of the beer during the brewing and packaging processes.

By default, all beer contains a small amount of oxygen and the aroma and flavour compounds in the hops in the beer will oxidise over time, causing them to dissipate.

Bacterial infections in beer are rare occurrences. The alcohol content in beer which acts as a natural preservative usually makes it extremely difficult for bacteria to survive and thrive. However, if bacteria finds a way to get into your beer, it will certainly start eating away at it.

Once again, commercial brewers usually don’t face this problem as often as they have access to the proper equipment needed to pasteurise or filter the beer so as to prevent bacterial contact. In the case of unpasteurised craft beer, the shelf life can be increased by refrigerating it as colder temperatures slow down the life cycle of microbes like yeast that live inside the beer.

There are many other factors that contribute to beer going stale; factors that brewers don’t have control over. For instance:

– Distance: If your beer has had long road trip from its brewery to get to you, it is likely that it has been subjected to extreme agitation, exposed to heat or left in the sun for longer, causing it to go stale quicker.

– Packaging: Beer stored in kegs are impenetrable. If your beer is packaged in aluminium cans, it’s likely to stay fresher as cans can block out direct sunlight, oxygen and other potential foreign impurities. When it comes to bottles, brown ones offer the most protection to your beer. Green bottles are fairly effective in blotting UV rays out while clear bottles offer the least resistance to direct sunlight.

– Temperature: How retailers store your beer before you make a purchase matters immensely. Storing the beer in a refrigerator away from direct sunlight is extremely critical in preventing ageing and retaining the beer’s freshness for longer. Storing cans and bottles upright, instead of on their sides, is also effective in minimising oxidation.

How To Store Your Beer Right 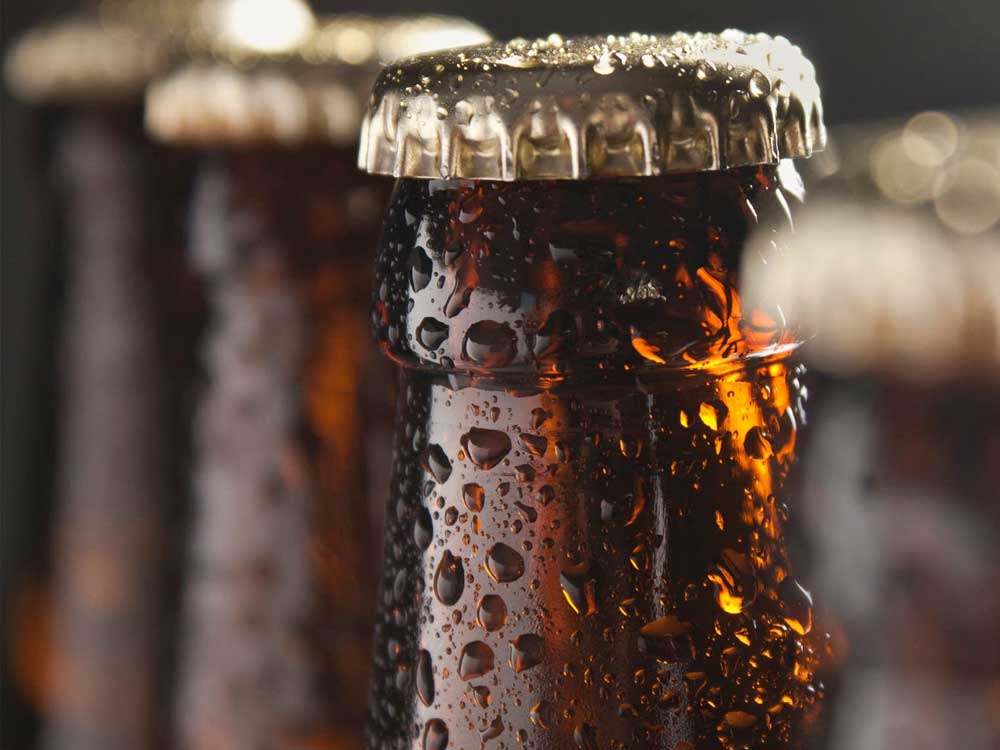 As seen above, beer is extremely delicate and there are so many things that can make it go bad.

To ensure every beer you buy – right from a commercially manufactured lager to a freshly crafted IPA – tastes its best, here are some basic tips you can follow :

1. Refrigerate it: Refrigeration not only keeps your beer cold but also protects it from direct sunlight. Many experts agree that the ideal temperature for beer storage is 50 to 55 degrees. Sealed bottles and cans can be stored in colder conditions.

2. Store it in a dark place: If you choose to keep your beer at room temperature – pick a cool, dark room that undergoes minimal temperature fluctuations. Basements make a great choice of place for storing beer!

3. Keep it standing upright: When you keep beer lying on its side, you allow a larger surface area to be exposed to oxidation. Beer that’s left to stand upright will only expose the top surface of the beer to air or unnecessary oxidation. 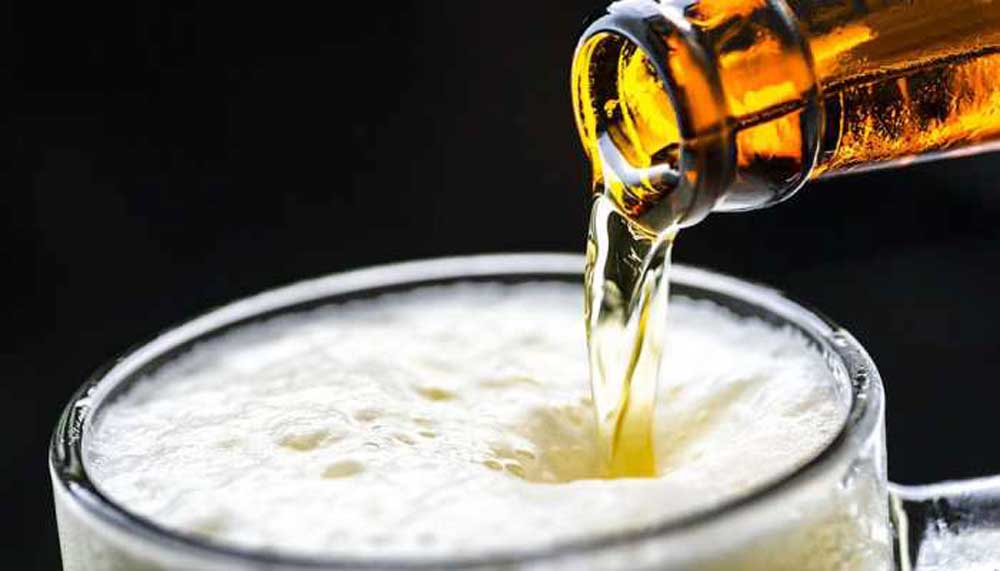 If your beer’s appearance, taste or smell has changed, your beer has definitely gone bad. Regardless of whether your beer is pasteurised or unpasteurised, drinking bad beer is never recommended because it will taste terrible.

No one wants to waste beer. So just drink it (responsibly) when it’s fresh. If you’re saving it for later, make sure you take all the right steps to store it well so it doesn’t lose its carbonation or turn skunky. A little extra care in storing your beer goes a very long way making your beer last!

Got some expired beer lying around that you don’t want to dump? Here are 12 clever ways you can put it to use!