With a PhD Biological Science and a position as Chief Adviser at the Mazumdar Shaw Medical Foundation, Dr Nirupa Bareja also serves on the scientific & technical advisory board of three innovative start-up – SigTuple, Aten Porous and 1Crowd.Director-India operations-Vicus. Therapeutics USA. In an interactive session with Brewer World, Dr Bareja, talks about the healthy side effects of beer.

Brewing and drinking of beer date back to 5000 BC. It has been recorded in the ancient history of Mesopotamia. Before the industrial revolution, it was brewed at a domestic level. But post that, it was produced using industrial set ups. In present times, there are many companies that produce and sell various types of beers.

When one talks of beer the first thought that comes to mind is celebratory! Most parties have beer as a cheery brew along with food to be enjoyed with friends. However, often the understanding is that beer is not for health watchers. It’s touted as a drink to stay away from if one isweight conscious and maintains a strict food regimen.

The intent of this article is to turn that thinking on its head. Contrary to what good health advocates believe the health benefits of beer include its anti-carcinogenic properties, a reduced risk of cardiovascular diseases, and an increased bone density. It helps in the prevention of dementia and coronary diseases, aids the digestive system, has anti-aging properties, and can also treat diabetes, gallstones, kidney stones, osteoporosis, and hypertension. It also acts as a stress buster and a diuretic The list goes on …

Before elaborating on the above I will help us understand – what is beer?

Beer is an alcoholic beverage brewed from cereal grains that are responsible for its nutritional values. People usually prefer to drink it with certain meals and it is the third most popular drink superseded only by tea and water.

Beer is an alcoholic beverage brewed from cereal grains that are responsible for its nutritional values. People usually prefer to drink it with certain meals and it is the third most popular drink superseded only by tea and water.

Beer has a greater protein and vitamin B content than wine, while its antioxidant content is equivalent to that of wine. Hops, a major component for brewing this beverage, are rich sources of flavonoids, which are potent antioxidants.

It is a very good source of certain minerals that play essential roles in various metabolic processes. If taken in moderate quantities, it can definitely boost health in a number of ways.

Health benefits of beer become pronounced if had in moderation. Some of them include the following:

Limited consumption also ensures that the calorie intake from it does not affect the health adversely. 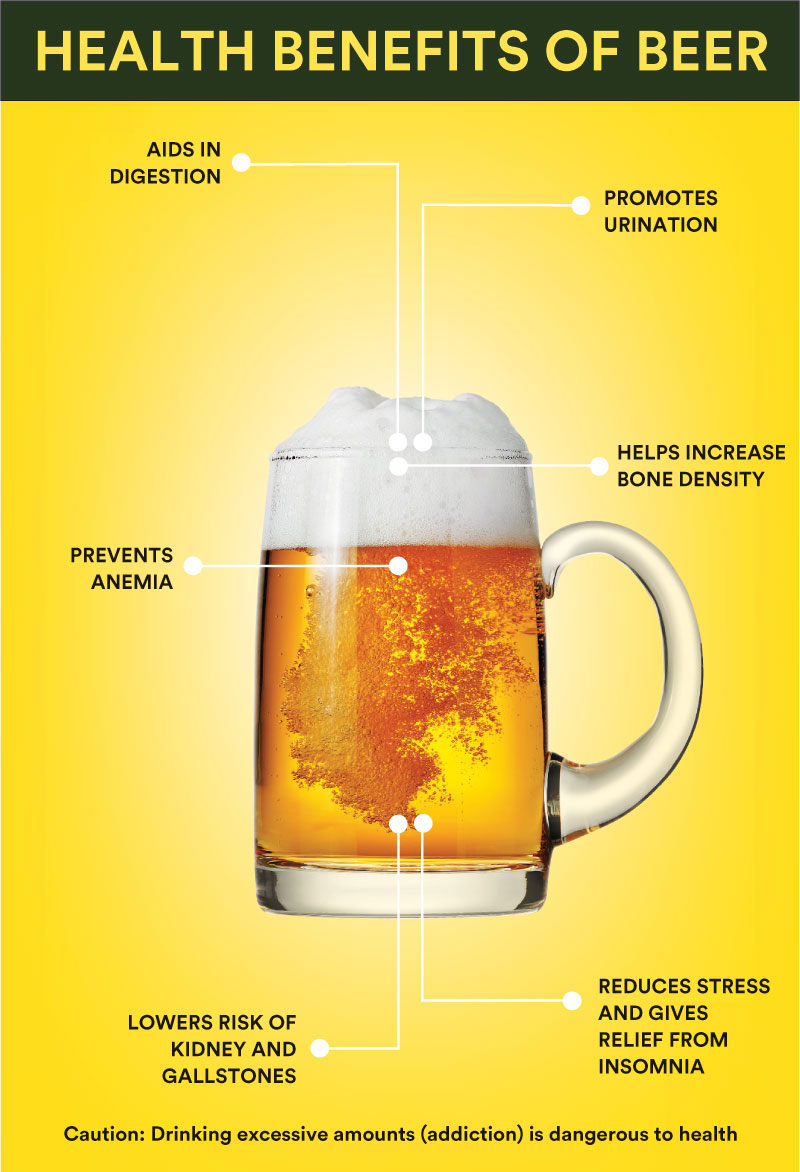 How to brew beer?

Beer is made using 4 ingredients- barley, hops, water, and yeast.One can make beer at home using a brewing kit and supplies that are easily available in the local market or online. Boil malt extract and hops followed by sterilizing this mixture. Cool down the mixture, add yeast and let the fermentation begin. Store and monitor the fermentation and when the beer is fully fermented it is bottled and set to age for 2-6 weeks before use.store it in the refrigerator and enjoy it with family and friends.

Prebeerbiotics – While probiotics in food and drink are most commonly found in products such as infant formula, fermented milk products and more recently non-dairy products such as cereal, for the first time they have been successfully incorporated into an alcoholic beverage!

The challenges in developing beer as probiotics are live microbes. The key is to ensure that they are not killed by stress from beer ethanol content, hop acids, lactic acid etc. In conventional brews several probiotic strains were found to die off after 1 to 4 days.

The special brew involved boiling the mixed ingredients, cooling, filtering, and adding yeast and probiotics, fermentation and then storage.

Probiotics survival in the special brew might be explained by how it interacts with the yeast, which had reduced hop acids by binding to the cell walls.

Another important characteristic of the beer was that it was unfiltered and unpasteurised as otherwise the probiotics could be killed.

Further developing such special brews is dependent on the probiotics used, storage time and temperature and of course consumer acceptance. Does this need to be added.

Word of Caution: Drinking beer in excessive amounts (addiction) is dangerous to health and can negate any and all beneficial effects.