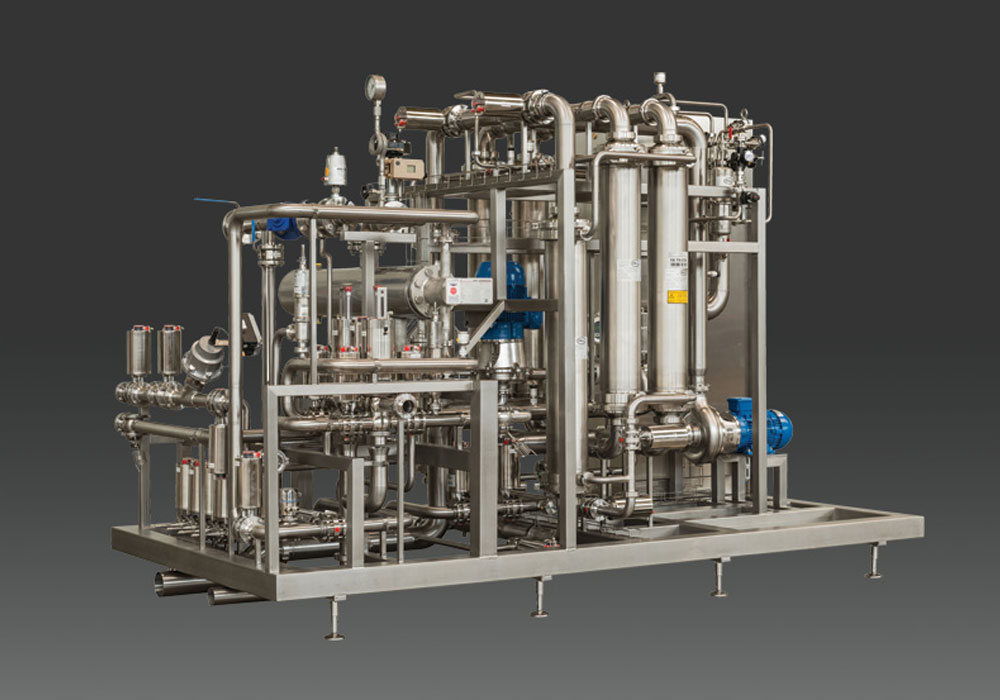 One of the main trends in brewing is the move from kieselguhr filtration to crossflow filtration. While health and environmental aspects were initially the main reason for change, today the demand for high quality and competitive costs drive more and more brewers to change. Based on more than ten years of experience, crossflow filtration is applied today for all types of beer at all sizes of brewing operations. The following article summarizes the situation with a special focus on small and mid-size breweries.

The first synthetic membrane based on cellulose nitrate was developed and tested with various fluids by Fick in 18551.

In beer, the first crossflow trials were reported by Diethard Wagner3 in 1993 followed by Karl Duchek4 from Seitz® in 1994 who presented for the first time a functional system concept with quality data and economic comparisons. The Seitz solution combined crossflow technology with a centrifuge upstream and a sheet-based disc filter downstream resulting in good beer quality at costs comparable to traditional Diatomaceous earth based technologies.

Meussel Brewery is producing 18 different brands including ten blond and eight dark beers, varying in gravity from 7.8° to 21° Plato, some of them with late hopping. Their total output is 15,000 bbl per year.

Eight years later, another Craft brewery ventured away from kieselguhr filtration towards crossflow membrane filtration. In 2003, Potts Brewery in Oelde/Germany installed the first PROFi filter system with a performance up to 100 hl/h. After two months of parallel installation and operation, the old kieselguhr filter was stopped and dismantled6. Since then, Potts Brewery in Oelde is using only crossflow filtration for their entire production. The brewery output is around 60,000 bbl per year. Four blond and three dark beers are produced with a gravity range of 11° to 14° Plato.

Based on the craft brewer’s pioneer work, the big multinational breweries became aware of the new trend and installed the first large-scale operations. Carlsberg Fredericia started with a 400 hl/h installation in 20057.The Carlsberg brewery operated the Pall PROFi system side-by-side with the existing kieselguhr filter and switched after a short test period to the new crossflow filtration system for all brands. In parallel, at the Kölner Verbund Breweries. Norit installed a crossflow system for the filtration of top fermented Koelsch beer. Kieselguhr filtration was also stopped after a short period of time8.

Today more than 150 Mio hl of beer per year are filtered with crossflow systems all over the world, processing more or less every beer type and mastering even those with very challenging filterability.

The basic principle for all crossflow installations in beer is the use of hollow fiber membranes in a circulation loop. The design can either be a direct flow principle with pre-clarification using a centrifuge or a system design with a retentate tank and return loop, typically operated without centrifuge9. With both designs the beer is circulated in a closed loop through polymeric hollow fibers. Depending on the solid load in the incoming beer, the circulation velocity must be higher in systems without pre-clarification. Also, the cleaning and cooling demand tends to be higher when operating without a centrifuge.

The use of ceramic membranes for beer filtration was described in recent years10. However in previous field trials, it has been proven, that the longer service life of the ceramic membranes does not give enough advantages to compensate for the higher cost of membrane surface area and significantly higher power consumption required to provide sufficient flow through the ceramic modules11.

“A comparison of the costs, the energy consumption, the water consumption and labour time was carried out for both processes. For the purpose of the cost comparison, it was assumed that the plant-specific depreciation charges are of a comparable magnitude. They were therefore not included in the calculation. The advantages and disadvantages of the two processes are easier to evaluate by comparing the exclusive time-dependent operational costs. In the case of the PROFI process costs, they depend on the filtrate cycle interval after which membrane cleaning is carried out, defined by the beer output in hectolitres during this time. The advantage of the PROFI process is that larger beer quantities can be continuously filtered. The energy and water consumption show a similar picture. The labour requirement is substantially lower with the PROFI process due to the high degree of automation.”

One further significant advantage was the strong reduction of beer losses compared to kieselguhr filtration. The results from the craft brewery were confirmed by the large-scale installation at Carlsberg and Kölner Verbund Breweries7,8. Today membrane filtration has proven at many installations a clear cost advantage to kieselguhr.

“A comparison of the costs, the energy consumption, the water consumption and labour time was carried out for both processes. For the purpose of the cost comparison, it was assumed that the plant-specific depreciation charges are of a comparable magnitude. They were therefore not included in the calculation. The advantages and disadvantages of the two processes are easier to evaluate by comparing the exclusive time-dependent operational costs. In the case of the PROFI process costs, they depend on the filtrate cycle interval after which membrane cleaning is carried out, defined by the beer output in hectolitres during this time. The advantage of the PROFI process is that larger beer quantities can be continuously filtered. The energy and water consumption show a similar picture. The labour requirement is substantially lower with the PROFI process due to the high degree of automation.”

Maintaining beer quality and character are among the most important considerations that brewers look for in a filters system. Therefore, a detailed comparison of membrane technology versus kieselguhr filtration was done by the Technical University Munich, Weihenstehan. Beer samples for the various analysis and taste panels were taken during a series of six different filter runs from all types of beers (lager types, dark beer types). In addition to the sensory and chemical analysis, a microbial analysis was executed as well11,13.

For the sensory test, the samples were taken from the kieselguhr filter and the crossflow filter in parallel. A triangle test and a DLG sensory test was performed by the Weihenstephan University taste panel14.

For all tested samples, there was no significant difference in taste and occurrence noticed. In both test series (DLG and Triangle need to be consistent upper and lower case), none of the beers were preferred by any of the tasters. Therefore, the sensory characteristics were not impacted by the new crossflow filter system.

The beer analysis covered the standard data plus the relevant fermentation by-products. In a first test series, the change from unfiltrate to filtrate was analyzed for both filter technologies:

The measured results have shown no significant difference in any sample considering the dilution effect from water used for the kieselguhr dosage. Variations are all within the standard tolerance levels for the specific analysis. Thus, there was no observed impact on beer quality from crossflow filtration.

The microbial reduction performance is one additional key aspect for the qualification of a crossflow system for beer filtration. To check the removal efficiency of the installed system, the University of Weihenstephan executed yeast and bacteria challenge tests using the standard brewery yeast and also Lactobacillus Perolens and Micrococcus, which where dosed upstream of the system in high amounts. For microbial safety, the brewery operates a CFS membrane filter system directly upstream of the filling line. Sampling took place downstream of the crossflow filter system and after the final membrane filter13.

Craft brewers put a lot of effort into their beer taste profile and quality. Therefore, the impact on taste active substances is always a discussion point. With the afore mentioned results, it was proven that PROFi crossflow technology is as gentle on beer as kieselguhr filtration. Today many beer types are filtered with PROFi systems, including ales, bitters, stouts, heavy beers, dark type products with specific flavors, hop intensive brews like IPAs, porters, alcohol-free beer and wheat beers. Additionally, cider products are run successfully through PROFi systems without impacting beer quality.

The ongoing success of micro and craft breweries is driving them to utilize new routes to market. The step into the retail shops and longer distribution routes require a more stable product in terms of taste, haze and microbial content.

Filtration is one way to fulfil these requirements. With the PROFi Crossflow system, the beer characteristics remain unchanged, the microbial quality is superior and the costs are comparable or lower than kieselguhr filtration. Today, crossflow systems are available, which specifically fit the demands of craft brewers. The PROFi beer filtration system is designed for the clarification of beer after fermentation and maturation15.

Combining the most appropriate technology for separation of the different solids allows for a filter design characterized by the most gentle beer filtration combined with excellent economics.
The centrifuge enables separation of solids like yeast, coarse colloids and stabilizing materials prior to the filtration system.

The PROFi Craft system operates without a yeast beer tank and without pre and after runs, which enables a more compact system design, smaller installation footprint, reduced waste volumes and better process control.

Additionally, with kieselguhr-free filtration, there is no exposure to iron or manganese that can negatively affect both flavor and oxidation. Furthermore, the enclosed system design results in extremely low oxygen pick up.

Crossflow filtration is nothing new for Micro and Craft Brewers. These brewers were the pioneers over 20 years ago, applying this innovation into the brewing industry. They demonstrated that beer filtration without kieselguhr is in many aspects at least competitive, but often better. Today, the economics, flexibility and beer quality outperforms kieselguhr filtration as shown in many installations that when combined filter over 150 Mio
hl beer/year.