Home / Love for Beer  / Responsible Drinking At Home Is Key During A Lockdown: Here Are 7 Ways To Keep Alcohol Consumption In Check

Responsible Drinking At Home Is Key During A Lockdown: Here Are 7 Ways To Keep Alcohol Consumption In Check 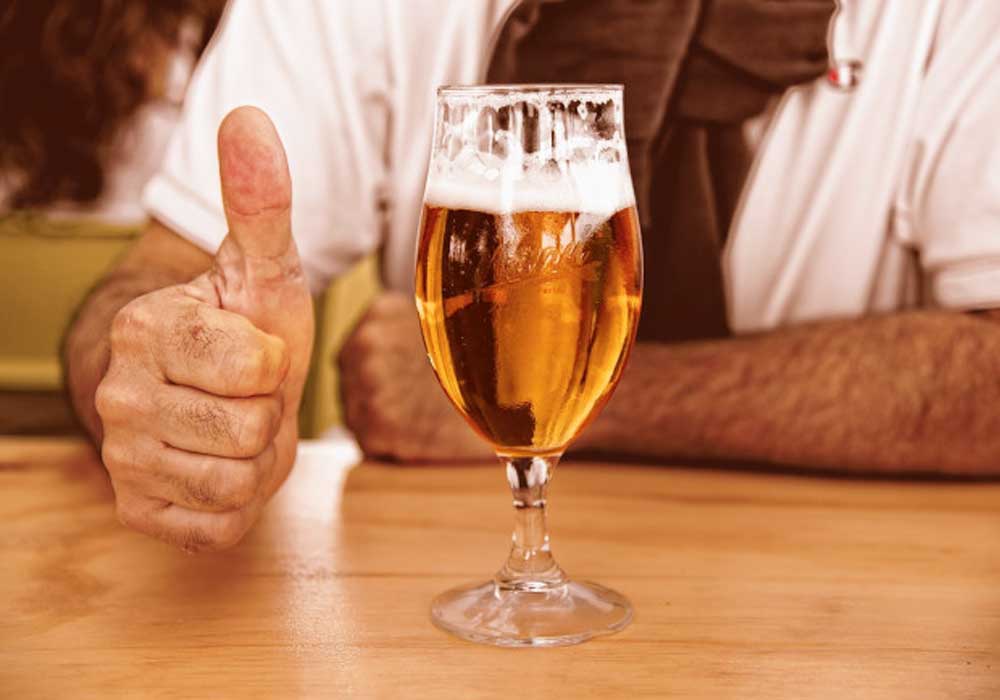 The angst of living in uncertainty. The boredom of finding your movement restricted to the four walls of your house. The restlessness of having to live apart from your loved ones and your closest friends.

The past year has been heartbreaking for everyone. With the pandemic wreaking havoc and social distancing norms forcing people to live in isolation – the world as we know has changed.

Findings from studies in the past have consistently proved that exposure to stress is one of the primary drivers of alcohol consumption at individual and population levels. And like all other global crises in the past, the coronavirus has also been increasingly pushing people to drink more. 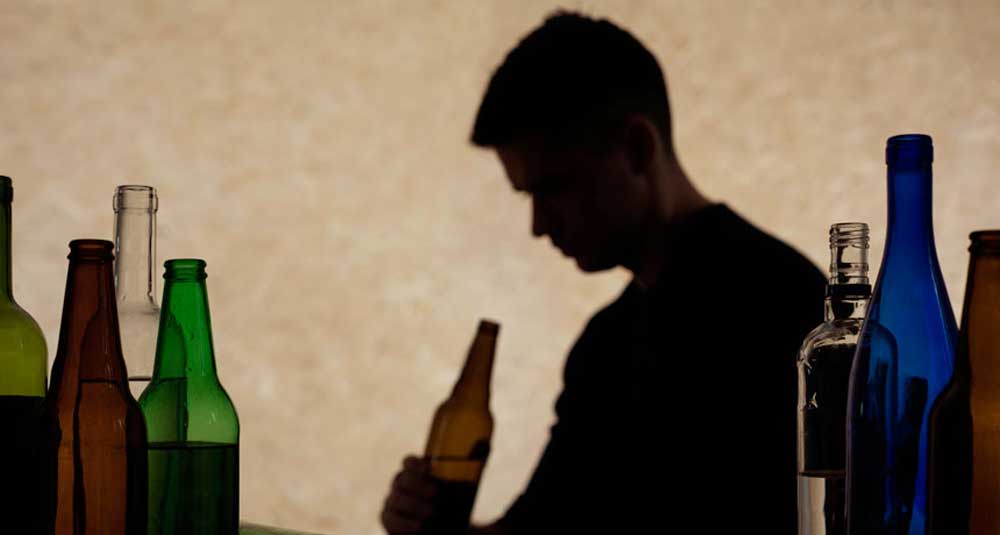 “Increased time spent at home is a life stressor that impacts drinking and the COVID-19 pandemic may have exacerbated this stress,” – Sitara Weerakoon, Ph.D. Candidate, University of Texas.

According to Carolina Barbosa, a health economist at the RTI International, a US-based non-profit research institute, sustained increases in alcohol consumption was recorded after the September 11 terrorist attacks as well as during Hurricane Katrina. However, the mental implications of weeks of isolation during the last one year and the sheer scale of destruction thanks to the pandemic are unmatched as compared to both these disasters.

Binge-drinking, A Rising Problem In India 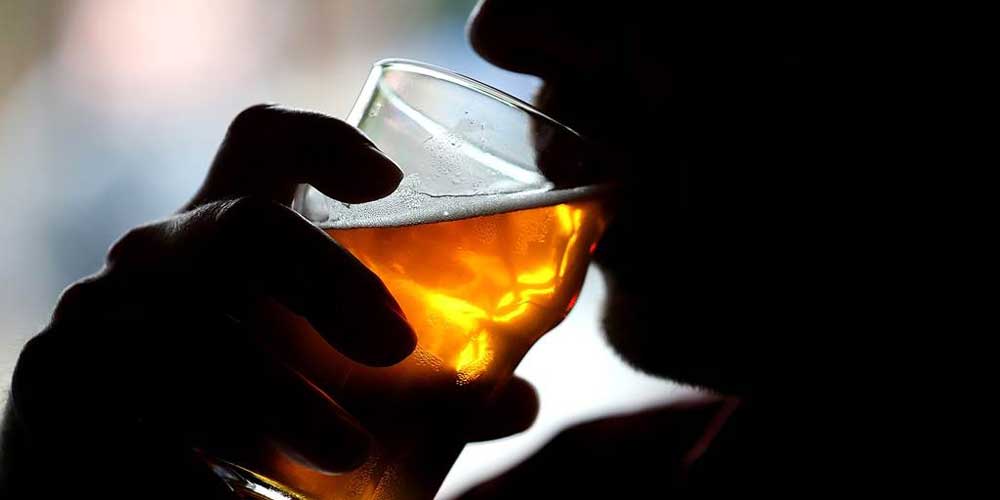 According to London-based research firm IWSR Drinks Market Analysis, India is the world’s ninth-largest consumer of all alcohol. India consumes more than 663 million litres of alcohol, up 11% from 2017 and per capita consumption is rising year on year.

A third of Indian men drink alcohol, according to a new government report, while more than 14% of all Indians aged between 10 and 75 drink. The World Health Organization estimates 11% of Indians are binge drinkers, against the global average of 16%.

Indians are also drinking more than they used to. A new survey of liquor consumption in 189 countries between 1990 and 2017 showed that consumption in India had increased by 38% – from 4.3 litres a year per adult to 5.9 litres. Jakob Manthey of Germany-based Dresden University of Technology and lead author of the study said the rise in consumption was because of India’s ever-burgeoning youth and middle-class population with greater spending power – a factor that is beginning to outpace the effects of measures aimed at reducing alcohol consumption.

7 Tips For Drinking Responsibly At Home During A Pandemic 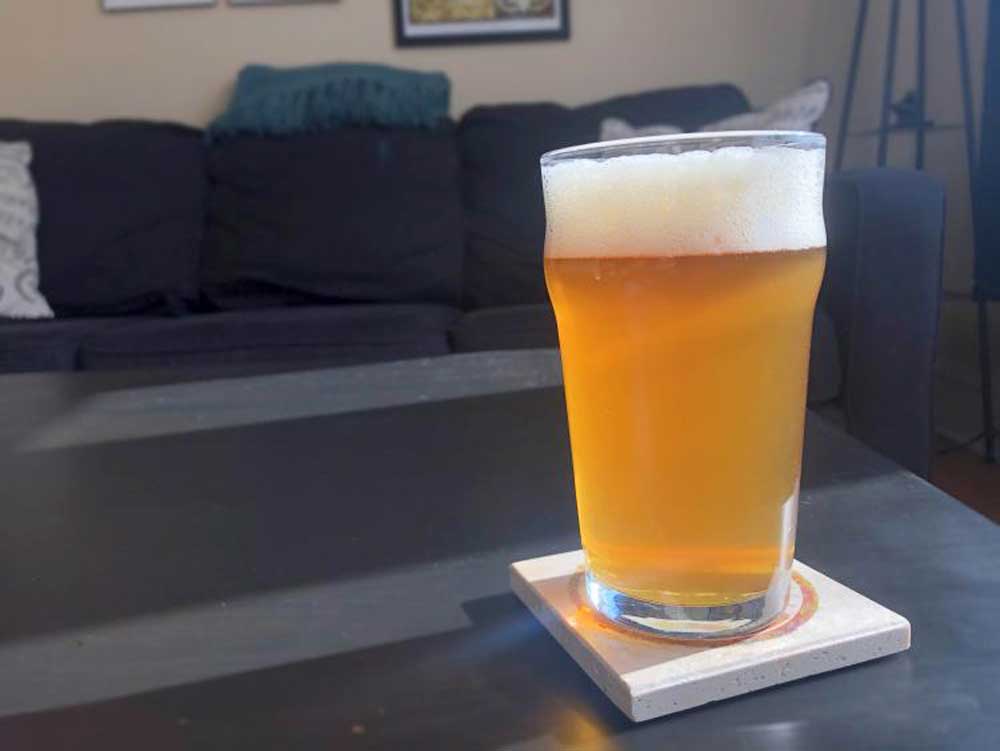 As the COVID-19 situation in India continues to rage on and India’s states go into lockdown/ curfews, it is natural for us to reach out for small moments of euphoria that are reminiscent of life before 2020. And while beer has been argued to have numerous health benefits as compared to other alcohol options, it’s important to remember that it’s still alcohol. Moderation is always key and overdoing it during quarantine or lockdown drinking could mean serious implications – ones that could linger long after this pandemic.

Here are 7 tips to help you keep your alcohol consumption in check and continue drinking responsibly at home during these trying times. Making a habit out of these will ultimately reap long-term benefits for you and your health, long after the pandemic.

1. Assess Your Current Intake (And Be Honest!) 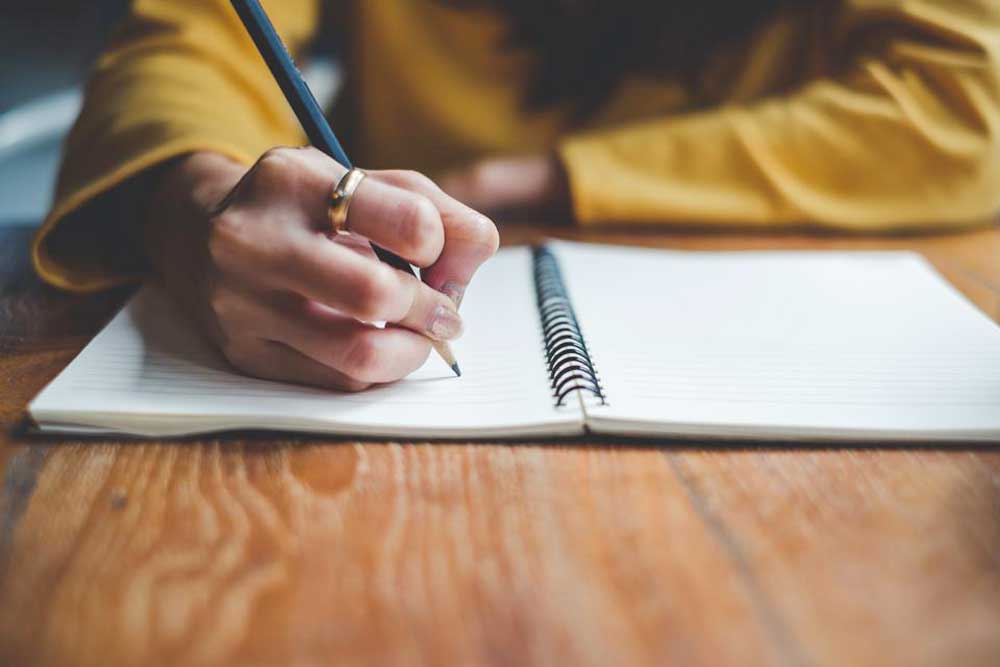 Keeping a log of how much you drink can be extremely helpful in tracking your alcohol intake. It’s pretty straightforward: all you need to do is record how much you drink each day. However, the more observations you make, the better you will understand your drinking patterns. This will make you more mindful of your alcohol consumption habits and equip you better to control your drinking. For instance, making note of your trigger points (aka things or instances that make you want to reach out for a bottle of suds) or even any negative post-drinking effects will help you stay better prepared to avoid the same in future.

Determine your safe alcohol limit or the amount of alcohol you can drink in a single drinking session. Since this is based on blood alcohol concentration and can vary from person to person, it is recommended to seek professional assistance to determine what this safe limit is for you. Knowing how many drinks your body can safely handle is a good step to maintaining a healthy relationship with your alcohol! 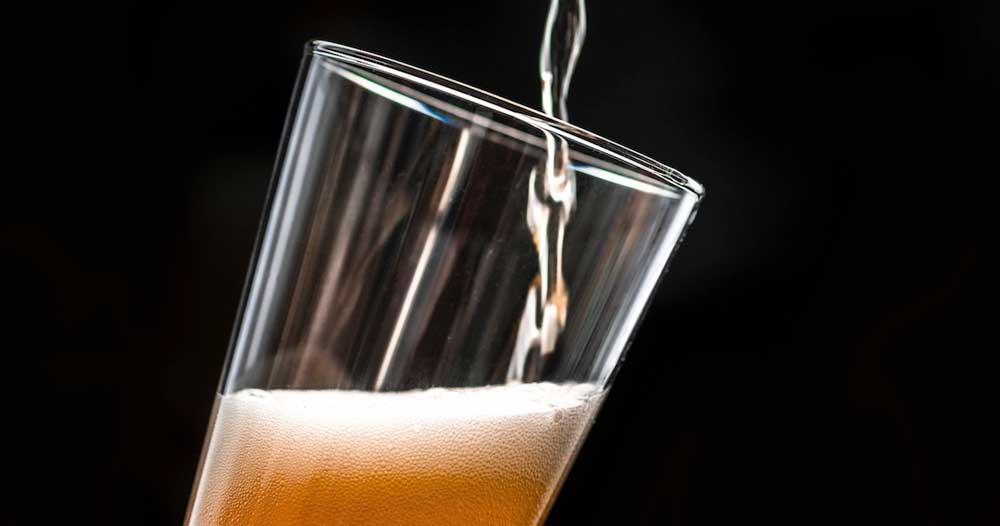 Research shows that for some people, drinking in moderation can be very effective at curbing excessive drinking behaviours. Controlled drinking, in fact, is not only possible for many individuals, but is also quite common among people who were heavy drinkers in the past.

Consult with a healthcare expert to find out if you’re a good candidate for controlled drinking. If yes, consider setting some specific drinking goals or ‘rules’ for yourself and making a note of them. For instance: some people could have a goal of drinking only on weekends while some could just want to drink without getting drunk.

Keep in mind that the whole point of this exercise is to do what’s best for your health and your lifestyle in the long-run. Setting unreal goals are not only hard to sustain but can also further bring your morale down. So, think carefully and set some realistic goals for yourself that you can stick to and achieve without beating yourself up about it!

3. Eat & Hydrate Before (And During) Drinking 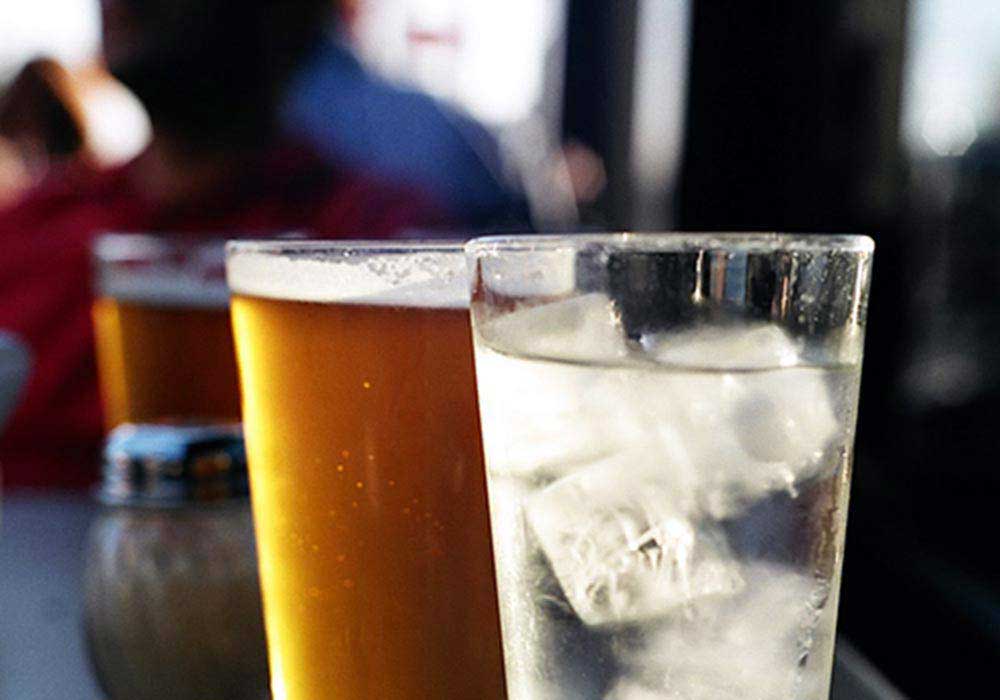 Drinking on an empty stomach is an absolute no-no, no matter where you are or who you are drinking with. Part of drinking responsibly is making sure you’re not drinking on an empty stomach. It also means ensuring that you drink plenty of water in between while recharging your body with appropriate portions of food to dilute the effect of alcohol consumption. Experts have found this technique helpful in reducing the urge to drink excessively a significant degree. 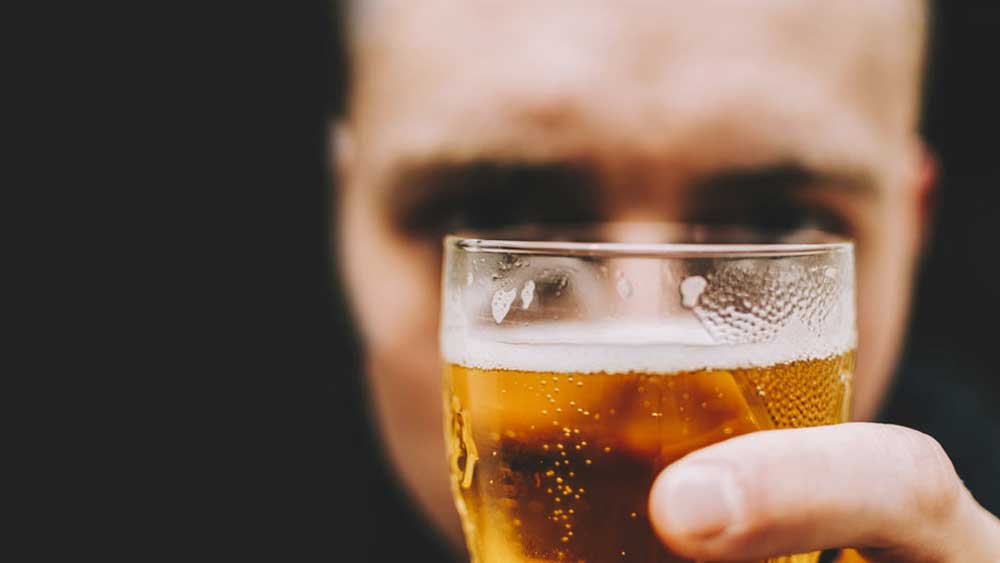 A study published in 2016 by BMC Public Health found that when a bar in Cambridge served wine in larger glasses, the amount customers bought and drank increased by an average of 9 per cent. According to experts, larger glasses make a regular serving appear smaller – driving people to reach out for larger servings or come back for a second helping sooner.

Additionally, a study from the School of Experimental Psychology at UK-based University of Bristol
also points to how the shape of glassware can fool a drinker into consuming more alcohol. People were found to drink 60 percent slower when served beer in a straight glass as opposed to a curved glasses like goblets. The researchers pointed out that it’s harder for people to estimate the true half-way point in curved glassware.

Furthermore, this effect holds true only in the case of alcoholic drinks, suggesting that curved glasses could impede our ability to pace ourselves with alcohol.

Try switching your fancy glassware with small-sized tumblers the next time; you may find you’re less likely to reach out for a second beer!

5. Stock Up In Measured Amounts 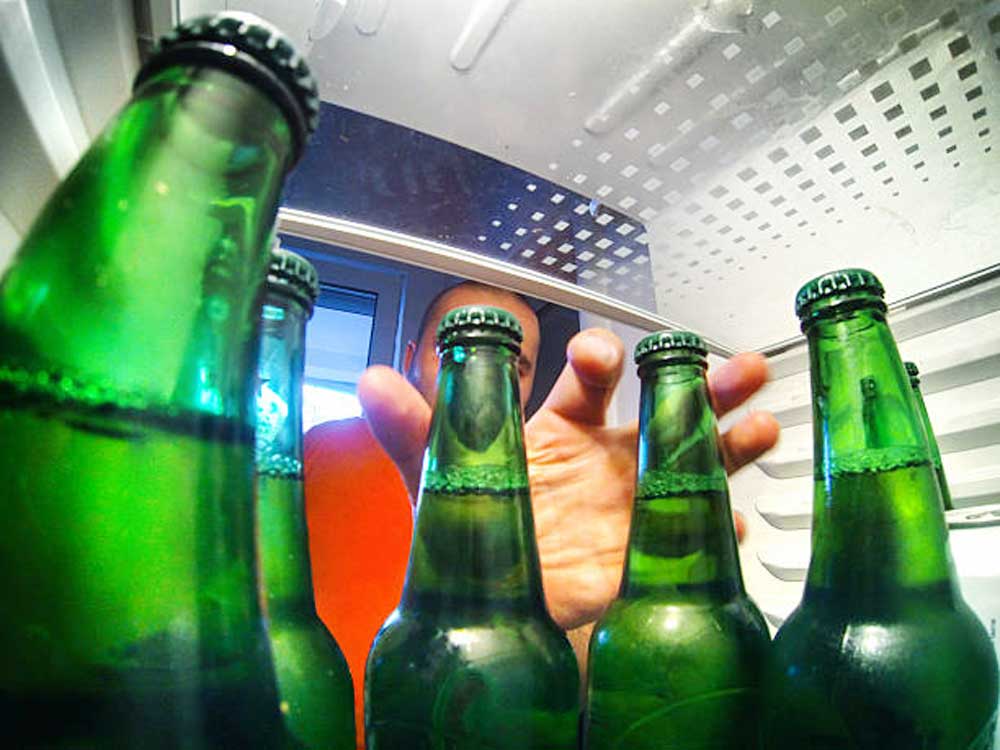 Stocking up on alcohol is the fastest route to sabotaging your Responsible Drinking goals. So set a limit for how much alcohol you buy at a time. Buy only the amount of alcohol that meets your safe alcohol limit to avoid binge-drinking at home. There are plenty of packaging options available today that are in fact, ideal for those looking to cut down their alcohol intake. Pints, crowlers and individual cans offer single servings usually and can be easier to keep track of. 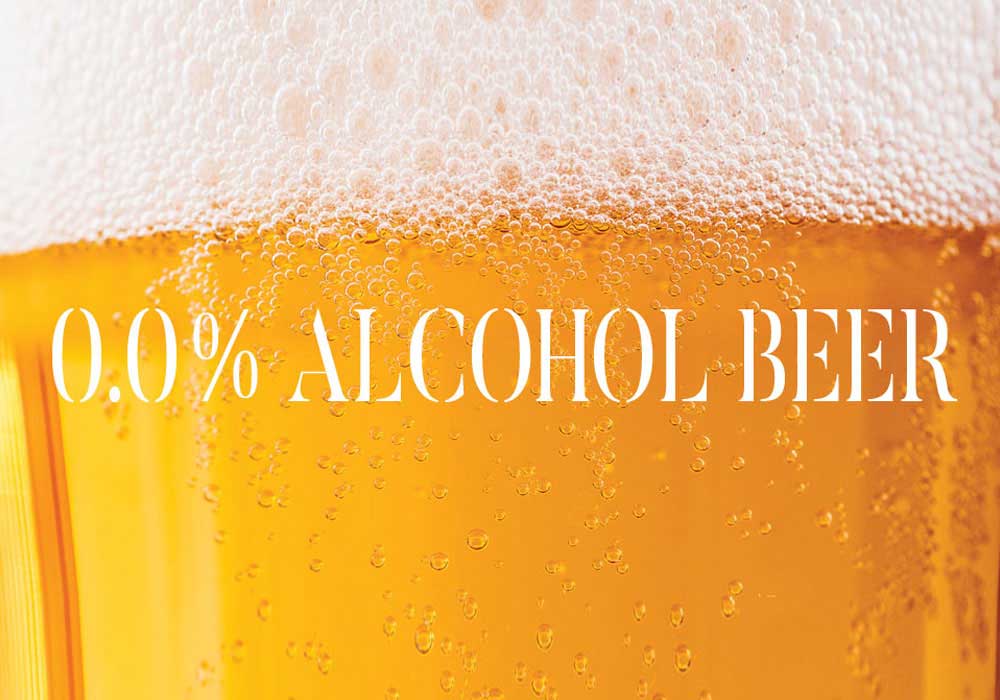 Gone are the days when alcohol-free beers were perceived as ‘soft drinks’ or ‘bland, tasteless beer’. Now, they are an established beverage category with a USP that empowers consumers with the freedom of choice.

Rising health concerns, changing consumer habits, tight restrictions on alcohol and now, the pandemic are some of the factors that have been responsible for driving growth in the no and low-alcohol (NOLO) beer segment. But beer makers are also attributing this skyrocketing growth to the overall progress and improvement in the flavour and quality of alcohol-free beers – many of which used to be described as either “too yeasty” or “too watery”. Brewers are now working extra hard to cut down artificial aromas and sweeteners used to mimic the quality of alcohol-containing beers brewed via fermentation. Some brewers have also started exploring manufacturing processes that permit the gentler removal of alcohol, thus retaining the taste of the beer.

So if you find yourself craving beer in the middle of a particularly rough day, give no and low alcohol beers a chance! They’ll give you the same experience sans the hangover!

7. Diversify Your Self Care Activities 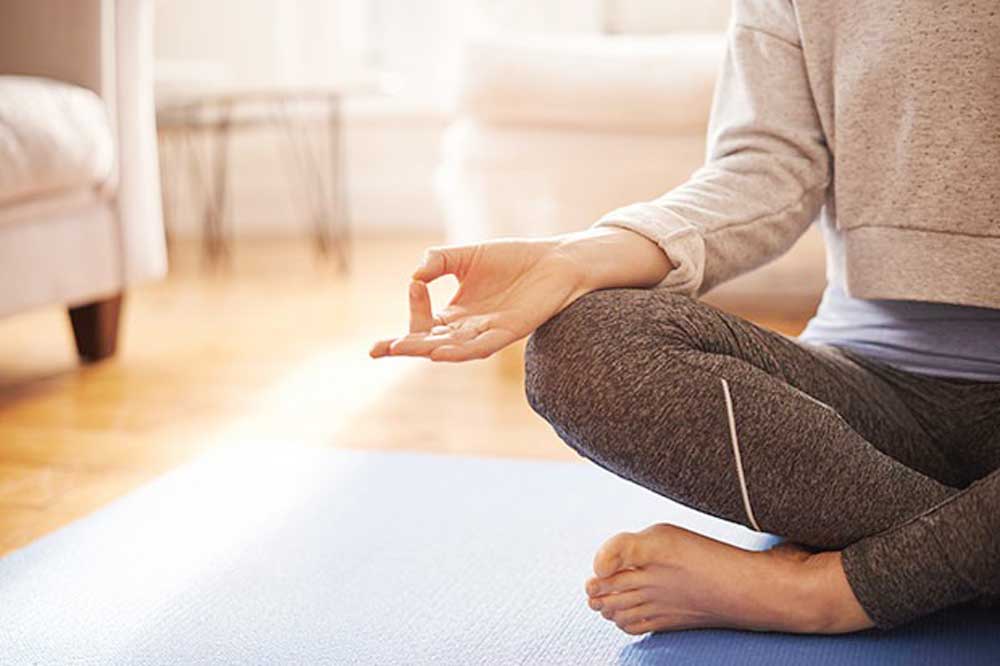 Dealing with prolonged periods of uncertainty and disruption takes a toll on our mental as well as physical health. With a complete obliteration of interpersonal connections and the usual structure of routine we were all once so used to – we need to be asking ourselves if we are taking care of ourselves enough.

Identify a list of things that help boost your mood and keep your spirits positive. Explore a new hobby, try a literary genre that you’ve never checked out before and keep your muscles active with regular stretches and indoor exercises. Having a strong sanity plan in place can help you survive these hard times without leaning heavily on alcohol.

Note: When making the decision to reduce your alcohol intake, consult with your healthcare expert to find out whether you’re a suitable candidate for controlled drinking. For instance, if you’re very young, pregnant, planning a pregnancy, breastfeeding, on medication or prone to frequent mood swings and depression, steering clear from alcohol is the best as it can be detrimental to your physical and mental health. Similarly, those with a history of addiction problems or living with family members battling an addiction or mental health issue should also avoid alcohol altogether.

While many people cut down on their alcohol intake without medical or therapeutic help, it is advisable to discuss your alcohol intake with your family doctor before trying to change it. Sometimes, depending on how much you have been drinking recently, it may not even be safe or realistic to quit cold turkey, and your doctor can prescribe medications or refer you to a treatment program. If, however, you realize you should quit completely, talk to your doctor about getting help with quitting alcohol and staying sober.

Ministry of Social Justice and Empowerment